A Winning Year with the Working Pointers

Let me just get the bragging out of the way first: My two German Wirehaired Pointers spend most of their time working, but I do enter the odd Field Trial as it’s a fun day out. I am not prepared to travel the country entering every Field Trial there is, so I have only entered a few last season, which then shows a pretty good strike rate: 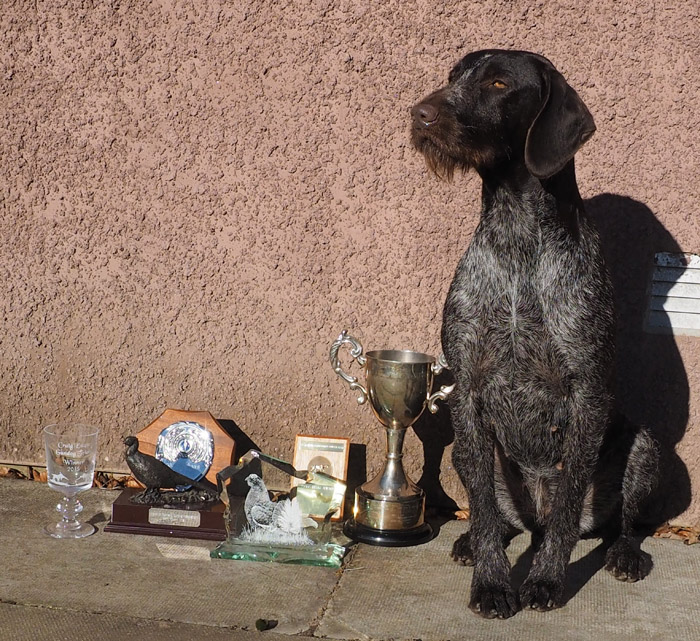 Strandkantens Gaia with her winnings 2015/16 season. 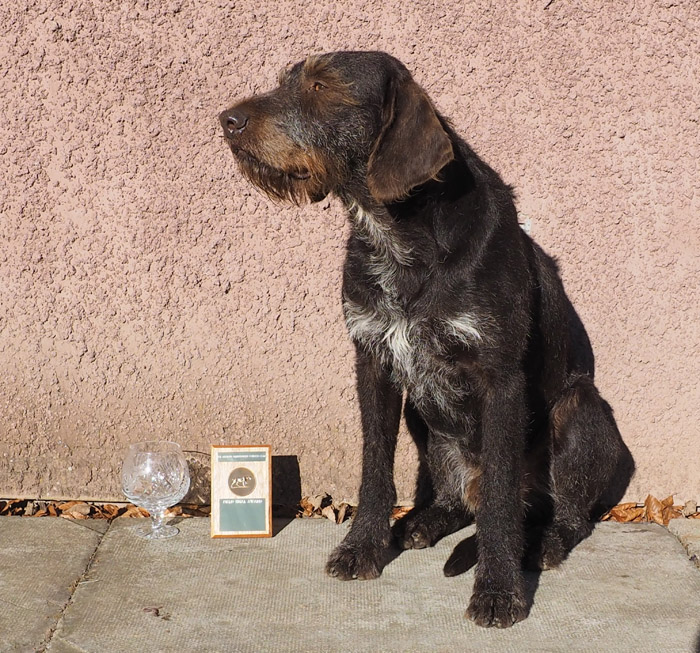 Gaia won the only Novice she entered last season. It was a grouse trial and she did a beautiful job of sweeping the moor and stop on point on the first bird that came in her scent path. Two birds were shot, but as it was a novice, she was only asked to retrieve the one she had marked. It flipped in the air, but she caught it and brought it back unscathed. She had a second run where she took in a big chunk of ground, partly on a cheek-wind, then carried on and moved forward, following the scent. I got the guns to keep up with me and she led us in, but it was a big covey and they took off before we could get there.

Later on I entered an All Age trial with both Gollum and Gaia. Gaia probably would have won it, but she is a bit of a wimp swimming, so when three dogs got through to the water test at the end, my two and one more dog, she let herself down making a mess of it although she did complete the task. Gollum got the first prize and Gaia third, but she took the trophy for “The Guns’ Choice”.

Later, during the pheasant season, I entered two open trials where she messed up the first one. She hunted, had a fantastic point in the bracken, flushed the bird, which was shot and she collected it, but she put it down and hesitated a little before she brought it back to hand. The judge was mortified having to put her out.

Things went better next time where she hunted, pointed and retrieved a live bird. She won that trial. So now Gaia just needs to win one more Open Field Trial to be Field Trial Champion.

I use the pointers 20 – 25 days on grouse each year. We get to the most beautiful places in the Scottish Highlands where guests pay their way to enjoy this old tradition of shooting over pointers. The respectful harvest of wild birds results in a modest bag that is admired and taken home to the kitchen. Walking the heather-clad hills while shooting over pointers requires a good level of fitness. 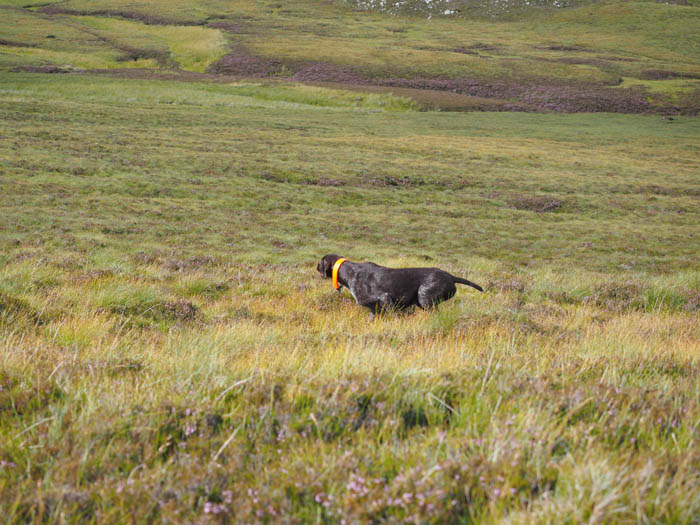 Gaia on solid point on grouse on the moor 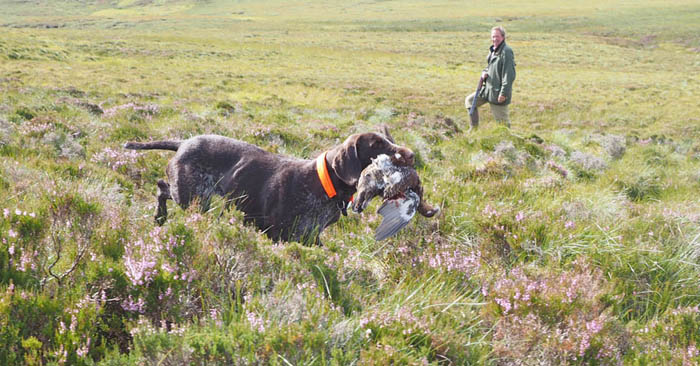 We are sometimes high up on the hills. Here we are near the Glenshee ski area and the heather can be very short on the tops making it almost impossible for the dogs to hold birds on point. Where the heather is sheltered a little bit in a hollow, it gets longer and lush enough to create a habitat for the grouse and here the dog gets a chance to stand back on point while the guns can approach. 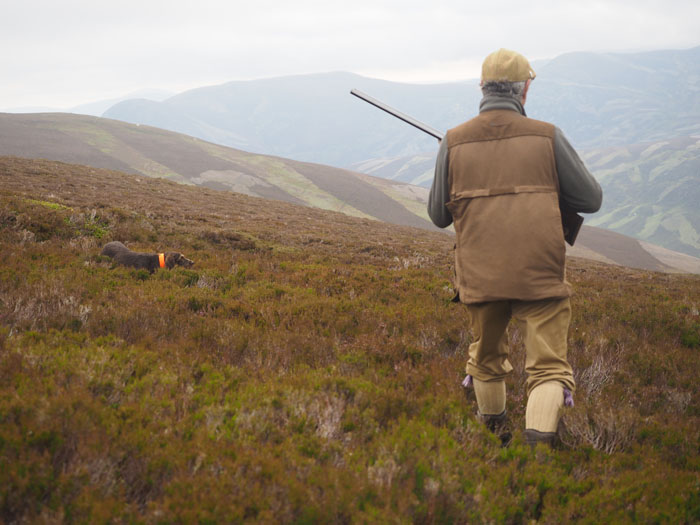 Gollum is on point in a little bit of thick heather

I often allow one dog to point and flush while the other dog retrieves. This trains steadiness in the first dog, in fact it is a lot to ask a dog to find the bird, see it fall and then not be allowed to retrieve, but this is all for discipline. 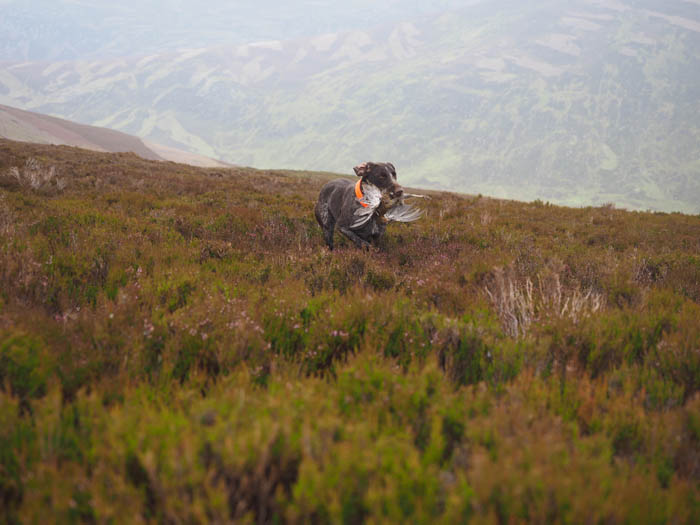 The steadiness is crucial because sometimes you might have one bird rising, which is shot and a little later another bird gets up creating a good shooting opportunity, but if the dog is running in to get the first bird, it is unsafe to shoot at the second bird and it ruins the opportunity. Therefore the dog MUST sit still till it is asked by its handler to retrieve. In Field Trials this is also important and if your dog does run in to the shot, your dog is eliminated from the competition.

Last year I did take part in one driven day. It was appalling weather and I couldn’t resist showing a couple of pictures here just to prove that the grouse moors are not always “glorious”. This is at 9.30 meeting and already looking dodgy. 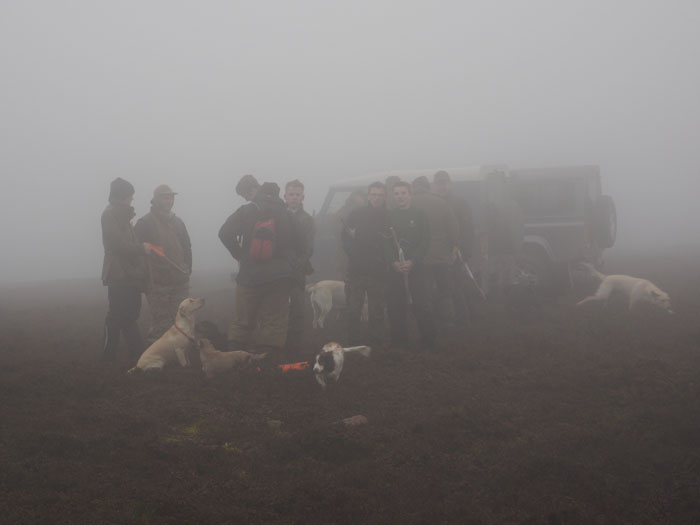 Beaters and flankers in the mist before a driven grouse shoot

And it got a lot worse. Here is the last picture before the day was cancelled. Everything wet and miserable: 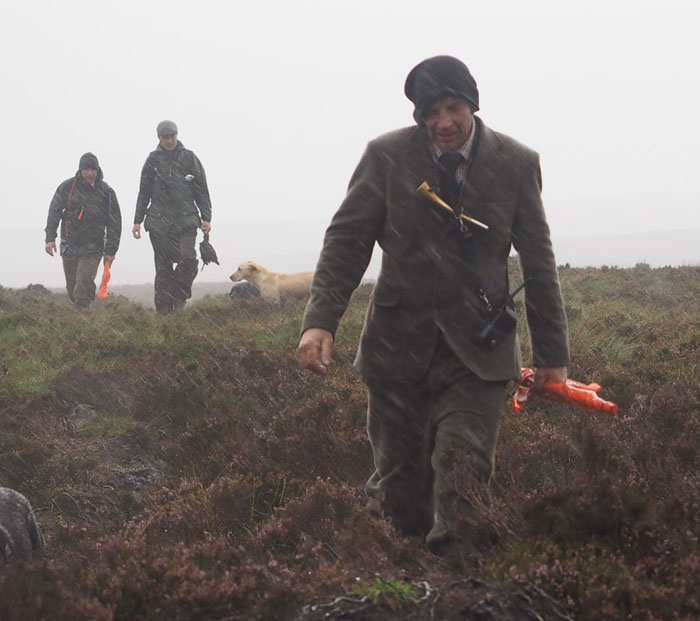 Flanker walking in pouring rain. The day was cancelled shortly after.

I had plenty of solid days with Gaia and Gollum last year and Gaia proved to be a really nice dog to work, now three years old. I received such a nice compliment from a Spanish guest, who is an accomplised shot with many years of experience. We had been out for half the morning and, after Gaia had presented them with yet another find of birds, he turned around to me and said “It is so relaxing to shoot over a dog like that”. Some dogs are a little too interested in just putting the birds up themselves, but both Gaia and Gollum have realised that this is a cooperation between handler, dog and guns and they work to make the day great.

Lastly, I must mention that hopefully Gaia will be pregnant, expecting pups on 27th May 2016. I have put her to Field Trial Champion Trudvang Balder. Anyone interested, please contact me on sales@tuffies.co.uk . His list of achievements in Field Trials can be seen on request. 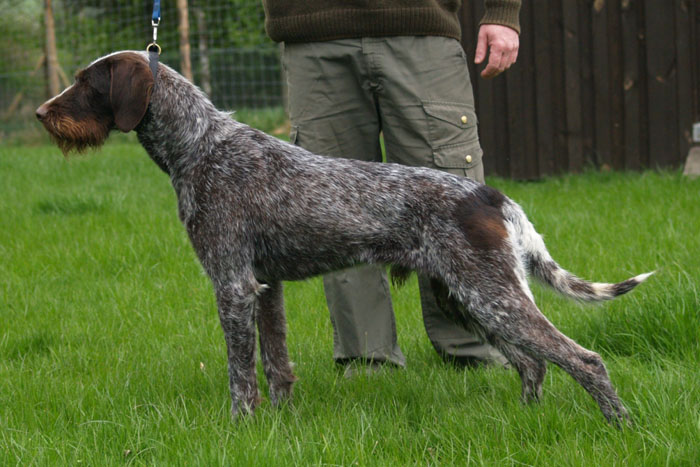 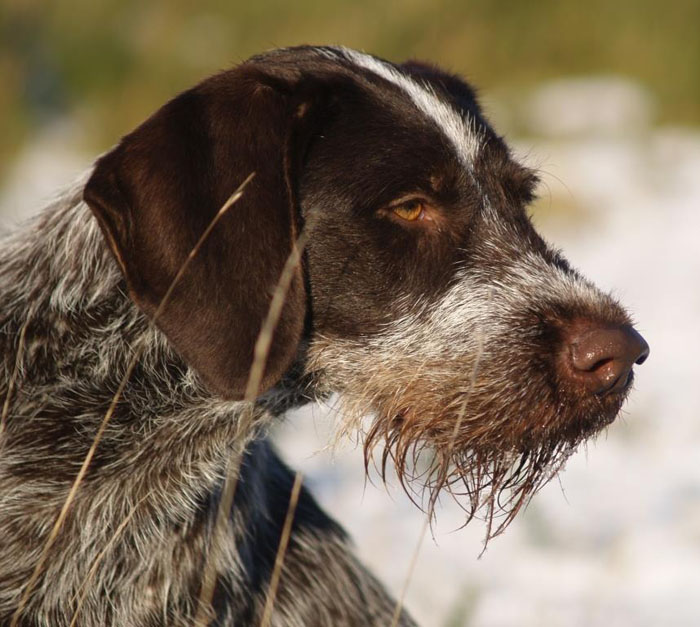