They are just little wolves

The whole process of these pups follow a set path determined in the distant past amongst the wolf ancestors to the dogs. Gaia’s handling of the new pups, her gradual distancing from them, her weaning where she still gives them a small amount of milk, but increasingly regurgitate food for them instead and her disciplining of the little young dogs. I give them toys (empty milk cartons etc) and they love that, but the “killing practice” is the most important. They spend all wakening hours chasing and pushing one another over, shaking the skin, biting and pulling. It’s a training in agility for taking down pray as much as a social education where they learn to know each other’s limits. When you bite someone and he squeals, you went to far. That’s it. They spend most of the day in the outside pen: 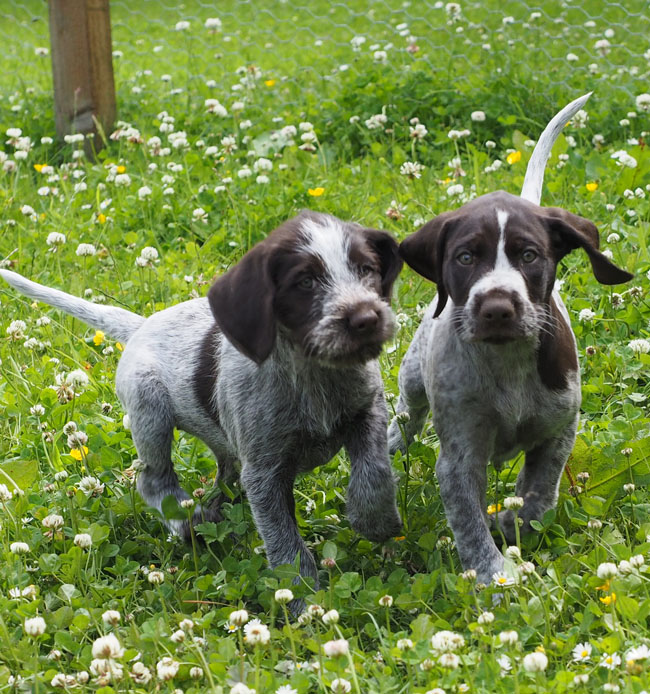 Theia and Pontus in the garden. 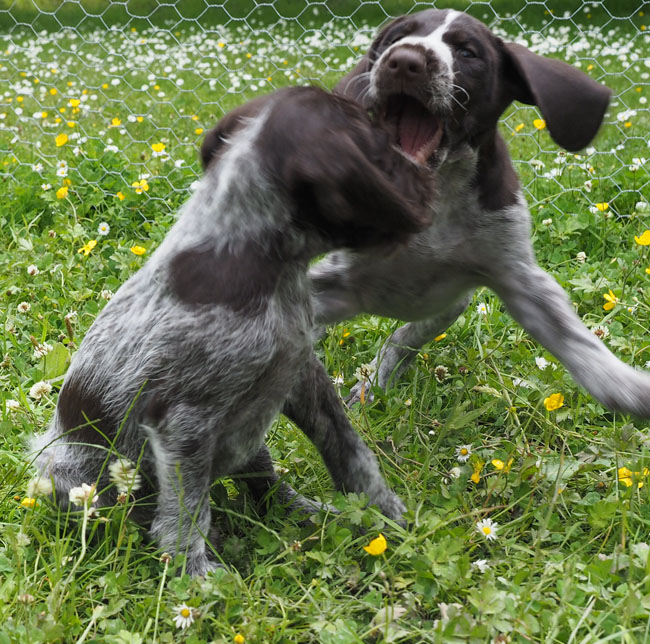 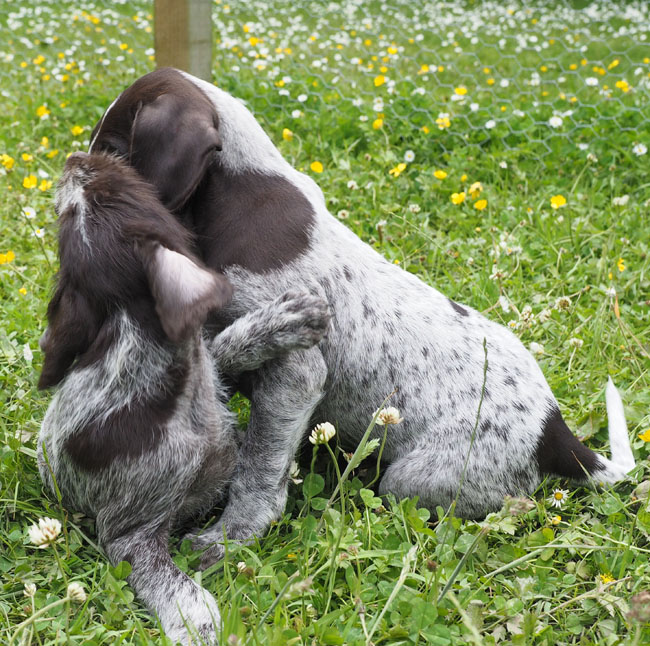 They are soooo difficult to take photos of and you often get this: 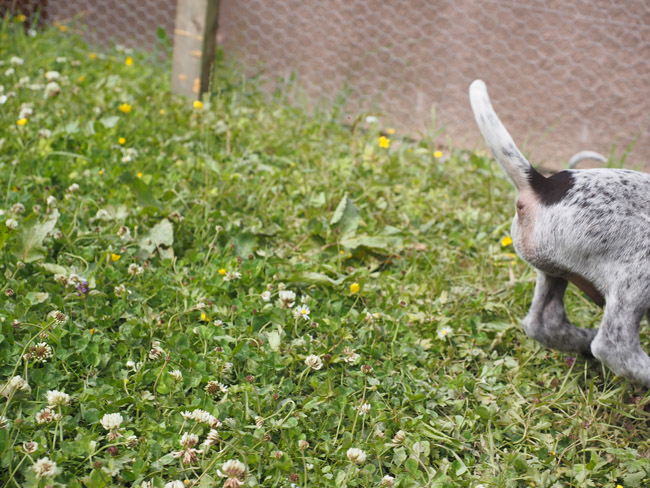 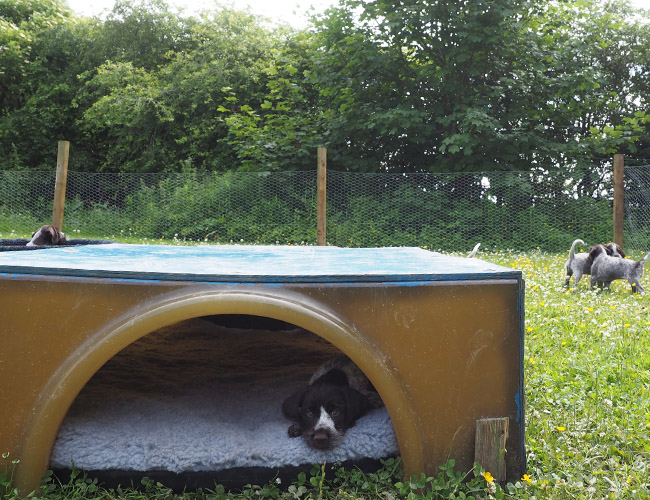 Some rest in the house or the raised bed, others play.

I managed to stick the camera inside the house and take this photo of Helios. He eats a phenomenal amount of food, so he needs to sleep it off: 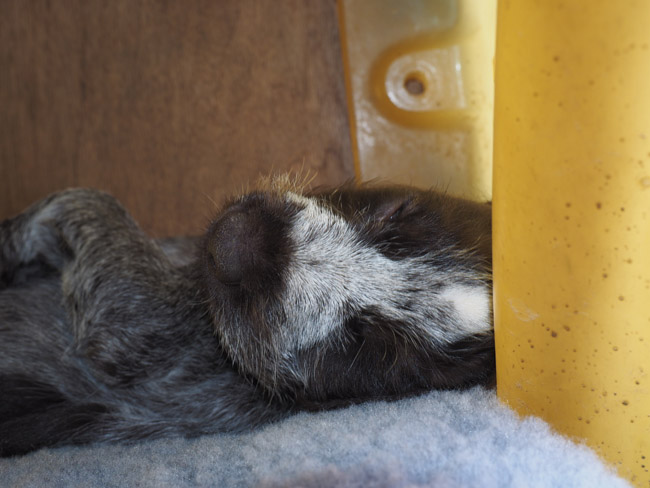 Helios upside down, sleeping in the house.

They LOVE the raised bed: 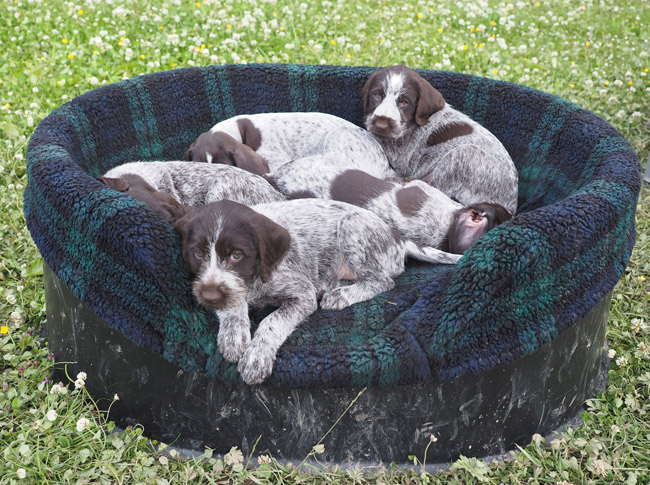 Mum does appear from time to time to feed the token feed of about 30 seconds: 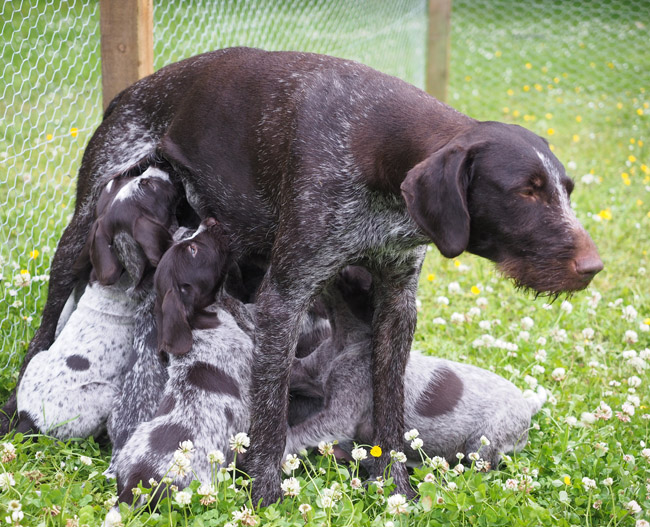 Gaia feeding in the garden.

Selene is savouring every one of the short moments she gets with mum’s milk: 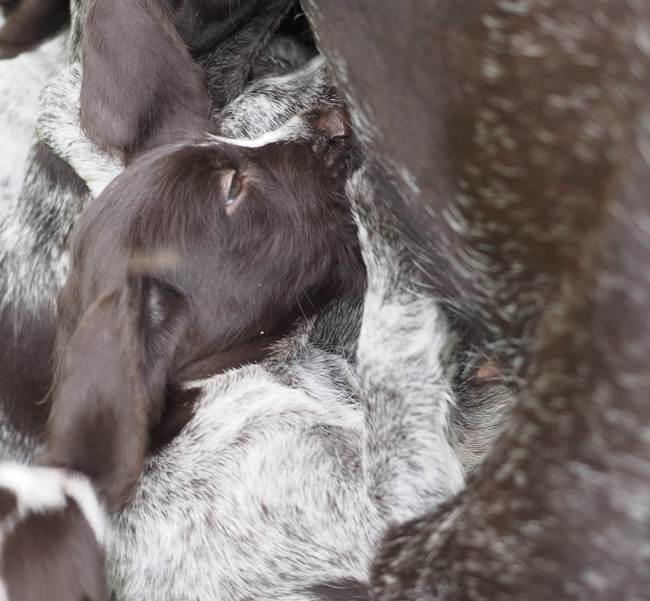 Selene concentrating on the milk bar before it closes.

I am now almost certain that I will keep Pontus. It had to be Pontus or Oceanus and one  puppy buyer is kind and patient enough to wait for me to make my mind up. I want to keep them both so I just have to think who I could not let go and it is Pontus. I think he is going to be a stunning dog on the moor. 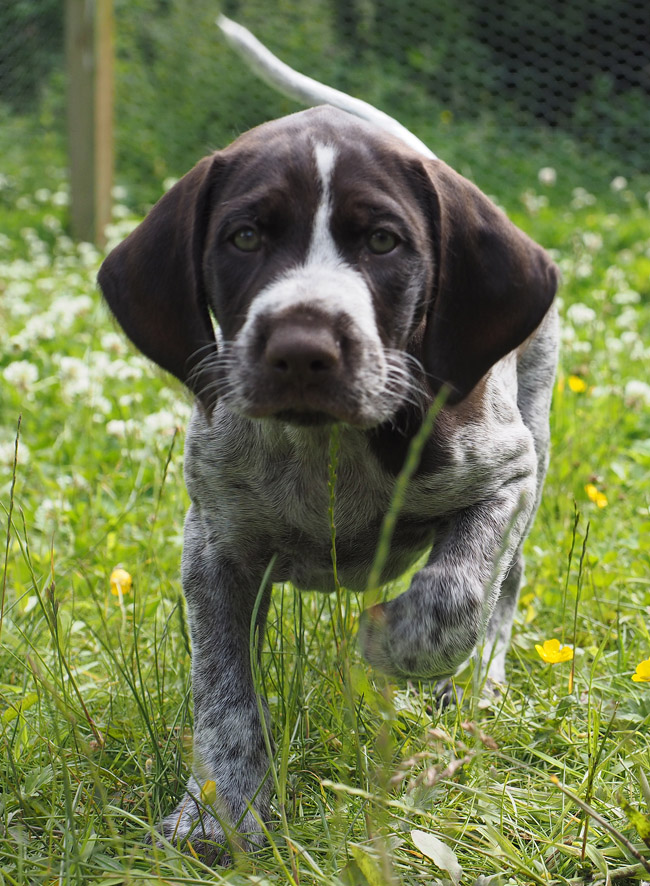 So we have had him in the living room in the evening where he has been allowed to be amongst the other dogs. Gollum is NOT impressed with these puppies at all and stays clear. Now Pontus is in his space, there is a bit of warning going on: 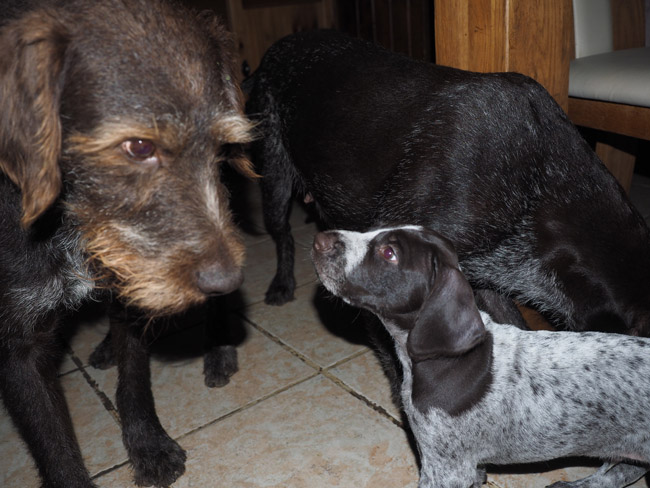 Pontus not sure he likes the expression in Gollum’s face.

Meeting Tippex is also a measured affair. Not exactly open arms policy here, but they will get used to each other. 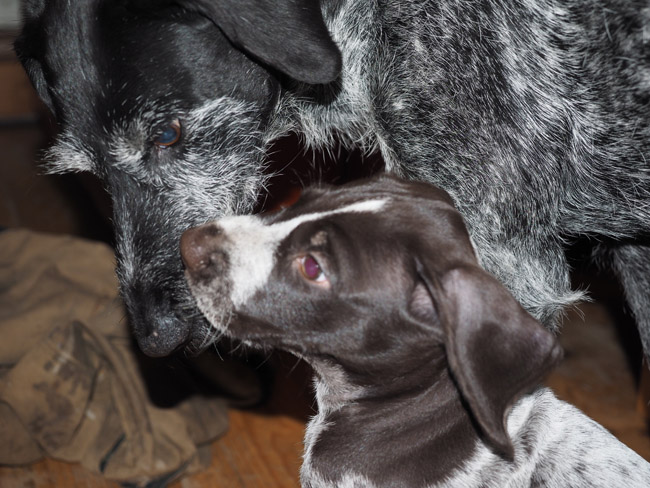 A very measured hello from Tippex. They have met before.

But he didn’t allow the frost from Gollum and Tippex ruin his opportunity for some sock-killing or shoe sniffing. 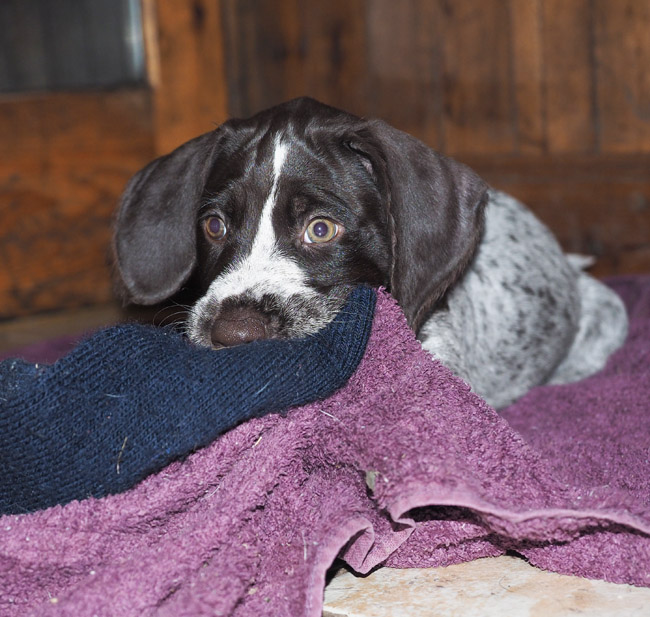 Pontus with sock and towel from the washing basket. 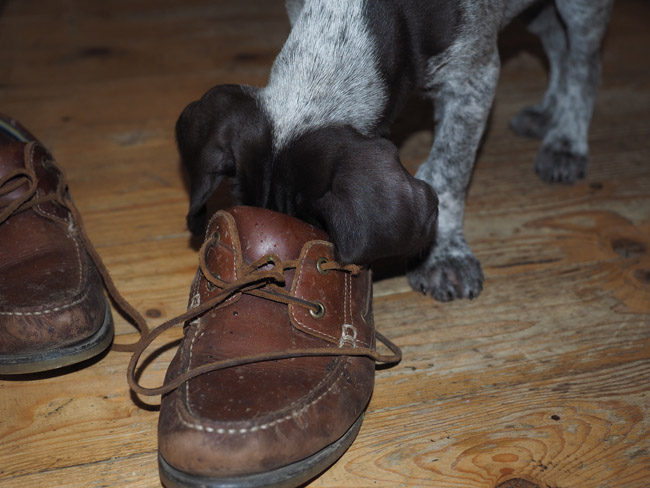 Nothing better than the smell of OLD shoes.

Last night I found that the tripe and meat was maybe just on a turning point (read: going off slightly). This never bothers dogs, who gladly eat all matter of rotten stuff, so it all went down. Gaia had been in the garden, away from the pups for over two hours when I allowed her in to see them in our house. She promptly regurgitated the whole lot in to the pup’s box. What a smell!!! The pups, who had been fed recently celebrated and gobbled up everything: 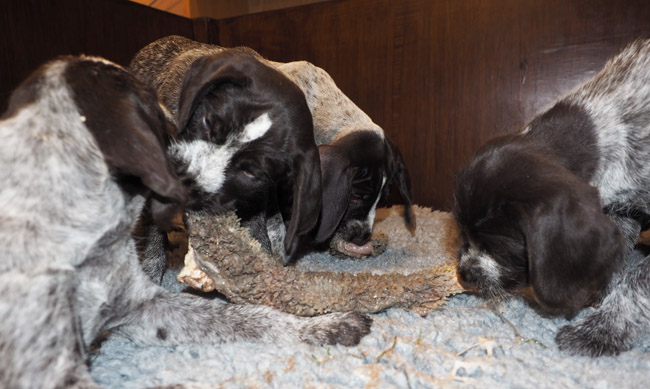 PARTY TIME. All for sharing. 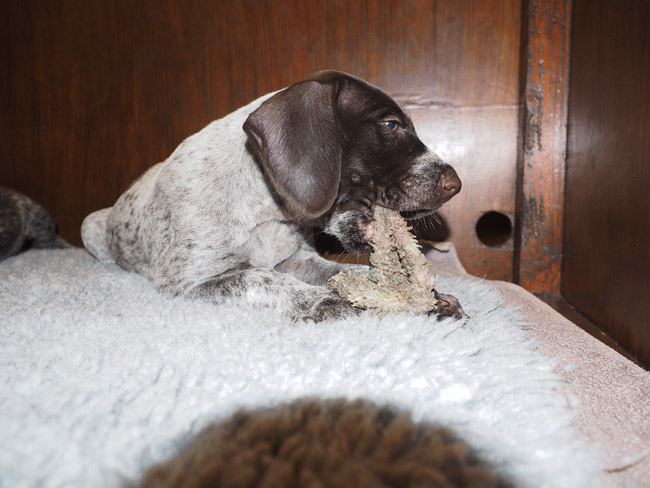 You can’t beat it: Regurgitated, slightly off tripe. 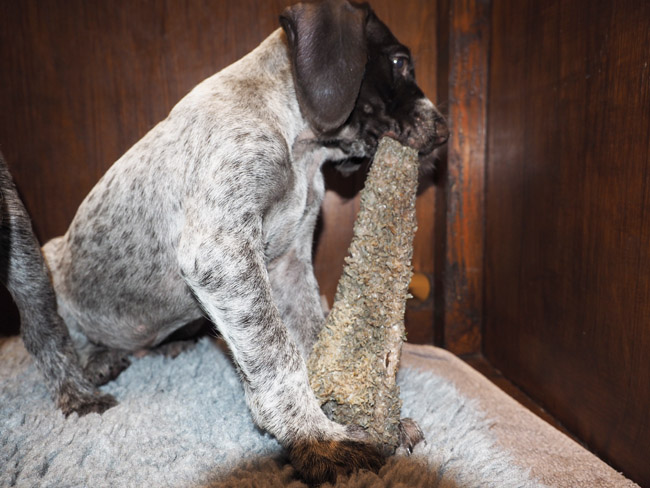 They ate the whole lot and fell asleep. 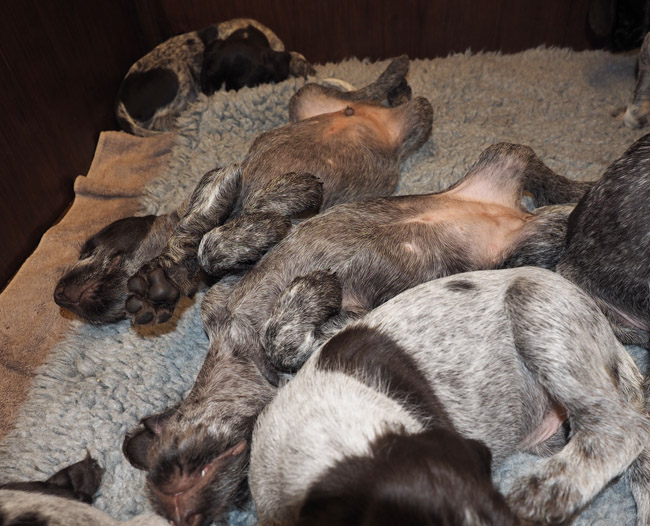 I make sure Gaia spends some forced time with the pups. She would rather not,  but she is a good teacher in doggy manners. They all try to suckle when she is near them and she growls and snarls and in the end she gives them a very fast nip. They still won’t leave her alone, but after many refusals they get the message. It is interesting how they react. Calypso and Phoebe hit the deck when she growls while Pontus doesn’t take much notice!!!

Last night, once they had settled down, she could enjoy them more and had some tender moments with Theia. Well, as long as she didn’t start on those teets!! 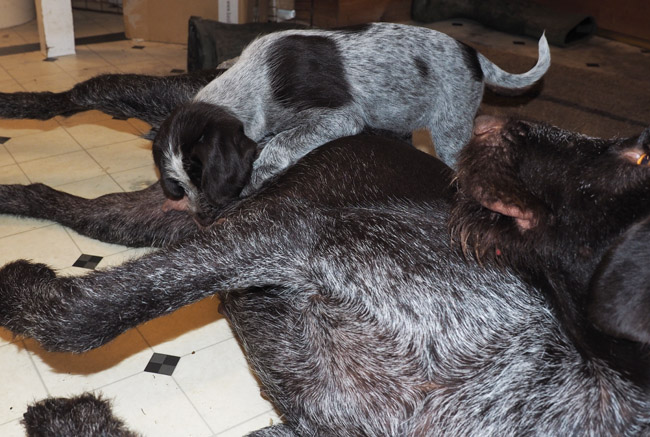 Just DO NOT suckle! 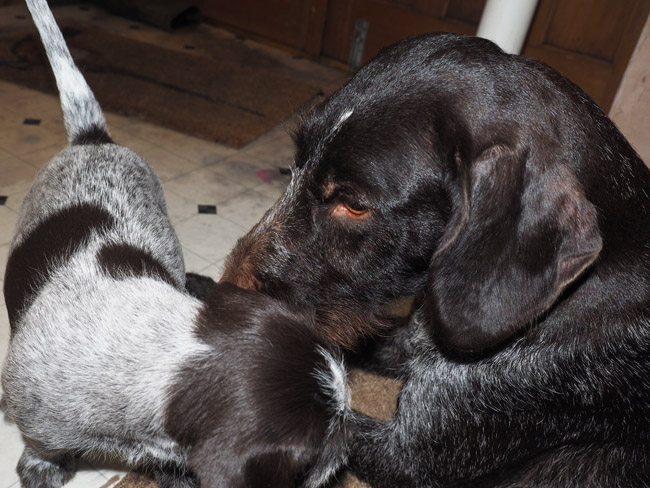 We only have them another week and a half. Boooh!