Many kinds of dog beds

I went up to Torrish with my friend, Anne, to have a look at the grouse population there. They used to shoot lots of grouse over pointer dogs, but heather beetle killed all the heather and hence the grouse that live off the heater, which stopped all shooting. Slowly, slowly the heather is recovering now helped greatly by burning and management. This is helping the grouse population coming back too.

Nigel’s Vizsla dog was very stylish and he reminded me of Alice. 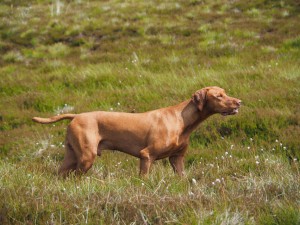 Gaia did well and I was really pleased with all the dogs. 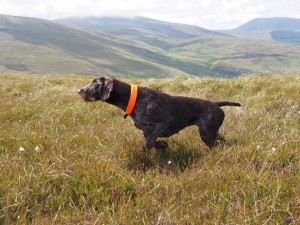 Gaia on point at Torrish estate in Helmsdale

So we were asked to take our pointers out to see if they could find the birds. This was a wonderful two day visit, where we got to know the ‘keeper and his grand dad, Jimmy, who was ‘keeper on the estate many year ago when the grouse was plentiful. Jimmy lives in one of the really old cottages on the estate and knows everything about dogs. In the old days they used to have 20 pointers and setters in kennels and I wish I had seen them. What dog beds did they use? I am sure it would not have been thick, waterproof dog beds like we tend to have today, in fact I strongly suspect it would be wooden boards. In the old days people did not “humanise” dogs to the extent that we do today. In the old days the dog beds would be luxury if they were straw. But I really should have asked and I will next time we go and visit. We had five dogs with us, so we split them up over night: mine slept on their waterproof bespoke dog bed in the back of my truck and Anne had brought nice dog beds for her dogs as they were sleeping in the kennels. The kennels were nice with a large run outside, but it is definitely more like an animal stable than a house. However, the dogs were happy.

Walking in to Jimmy’s house, a little Jack Russell puppy had a dog bed in the kitchen. Well, it was a plastic dog bed, but it might as well have been a washing up bowl. It was tiny. But the wee dog looked ever so happy and had the freedom of the kitchen porch and all 10,000 acres outside. He did not take advantage of the latter.

The other dog bed we saw was the straw in the trailer. As we went on the moor, we had all the dogs (and me) in the back of a trailer towed by the Argo cat. I preferred to be standing in there to make sure I could interfere if there should be a scrabble. We ended up with about 10 dogs in a very small space, all coming from four different homes. You have to be careful, but there was no problem at all.

A fascinating place all together. In the evenings the red stags came down, across the river to help themselves to the green grass. They are still “in velvet”, which means that their antlers are still covered in skin. This means it has blood supply and nerves. It would hurt too much if they were fighting in a real staggy manner so they keep to boxing instead. It’s fun to watch. 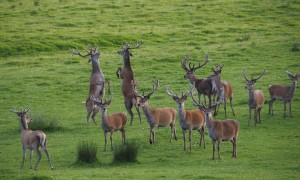 Stags in velvet, two of them “boxing”.