How Much Exercise do Pointer Dogs Need?

Quite a lot. Pointers (such as Pointers, Setters and HPRs (Hunt-Point-Retrievers)) are bred to run and hunt. With that genetic set up, they do like to be active. Exercise is one of the four pillars of dog care, which is LOVE, FOOD, DOG BEDDING and EXERCISE.

You can easily have a pointer breed without giving it a huge amount of physical exercise, but once such a breed is fit and used to a lot of exercise ,this needs to be kept up. You shouldn’t give a dog a lot one week and then leave it to do nothing for the next.

Both! When a pointer hunts, he is running in a demanding terrain with his mind concentrating and totally fixated on finding game. The physical effort is very much secondary to his activity as he simply does this to get across the ground. The exhaustion at the end of the day is just as much a mental exhaustion as a physical one. When he slumps on his luxury dog bed after a day’s moor running, he is mentally worn out and physically “a little bit tired”.

Some pointers are used for deer stalking and they don’t get much physical exercise, but PLENTY of mental. I once spoke to a deer stalker and he said that he would sometimes sit in a high seat (a seat around 8 meters tall from where you can see the deer walking around) and his dog had been sitting at the bottom of the seat. The dog had to remain completely quiet and sit completely still. The only time the dog would ever be needed would be IF the deer was not shot cleanly. Then the dog would be sent for it. This hardly ever happens. When he returned home from sitting for a few hours in the high seat with the still dog below, the dog would head straight for its Tuffies Nest and fall asleep, utterly exhausted. The mental strain of keeping an eye out for deer, whether any appeared or not, was draining him of all energy.

Exercise with the bike.

I have three German Wirehaired Pointers. They are kept fit for bird hunting and therefore they crave physical and mental exercise. I take them all along on a 9 mile run with my push bike 1 to three times a week.

Exercising dogs by letting them run with the push bike.

While I am puffing and huffing up the hills, they just trot along. It LOOKS like they just trot, but they are definitely switched on all the time. We won’t be passing many game birds sitting in the side of the road (or in the fields along the road) without the dogs knowing. Obviously the wind direction has to be right, so when it’s windy from the road side, we get points all the time. They stop instantly when the bird scent hits them. As they are working dogs I won’t ignore this and I “deal” with each point. I have to leave my bike and work the dog through the process of flushing and sitting to the flush. All good practice and training for the dogs. You can even do this during the nesting season because if there is a point on our route next to the road, it won’t be a hen pheasant on eggs, it will just be one foraging.

Gaia and Pontus on point. A pheasant was at the side of the field.

Getting hot from the running.

After 9 miles of running, they all feel it. They are hot if it is on a warm day and as soon as they are let back in to the garden, they head for their nice little pond. The three of them have a large garden to live in during the day with a patio and four little kennels beautifully equipped with luxury dog beds. The garden has a lawn with apple trees and a little bit of woodland also. In the middle of the woodland we have made them a pond. After the bike exercise they head straight for that if it is a warm day.

Gollum getting in to the woodland pond.

We recently dredged the pond, so it is still a bit silty.

Having your own pond is one of life’s little luxuries.

And having said all that about the mental exercise from running and pointing over a 9 mile stretch, I always see them at the back door after the run and the swim, where they clearly are asking “And are we doing anything today?” They are pretty insatiable, but again, that comes down to their breeding. They can run all day on the moor, so an hour is nothing to them.

Agility is the PERFECT way to stimulate both body and mind for dogs like pointers. They don’t have to hunt game, they just want to use their brains and they love running. They get very attached to their handlers and the agility is a lovely way to keep that bond.

Any kind of activity, where the dog needs to think is great, but anything that combines this with physical activity is even better..

British Heart Foundation had an advert going many years ago reminding us that we ought to walk the dog, even if we don’t have one. Of course that is true because exercise is good for us, but walking without a dog, to me and most of us who love dogs, is a little empty. Further, if you have a dog, there is an obligation and a pair of eyes that begs you to get those walking boots on every single day.

Ball Throwing is Another Good Activity

One of the best inventions for dog entertainment has to be the ball thrower. The one with a long handle that makes it easy to throw the little ball a long way. As you walk and throw, your dog is exercised and entertained perfectly. Especially all the retriever breeds. They all have a hunger for carrying and retrieving.

We used to have a little Labrador/Collie cross and our son used to hit a tennis ball against the wall of the house. The dog was quickly trained to pick up the ball when he dropped it and not only did it bring it back, but because it became horribly covered in saliva, Fergus didn’t want to touch it, so he taught the dog to place the ball on the tennis racket instead. In the beginning he dropped the ball a lot and the dog was very happy. She retrieved it over and over and the ball became increasingly sodden with saliva to the extent that the first hit on the wall left a saliva splotchy mark. But as Fergus mastered the hitting on the wall, he dropped it less and less. He easily hit the ball over 500 times without dropping it and the dog was completely exhausted because despite not getting a retrieve, she was following every single hit on racket and wall intensely.

After a good and fun run or exercise, a good dog bed is essential. Here is Pontus in his Raised Dog Bed on the patio in the summer. 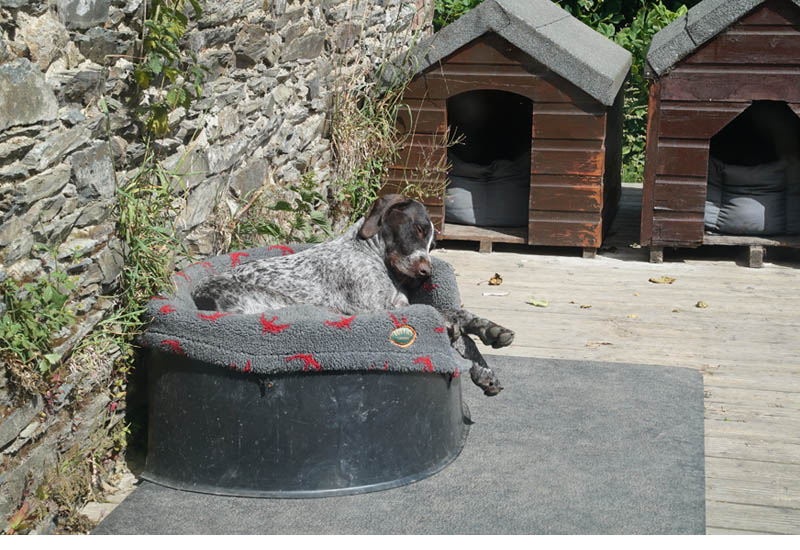 Pontus blissfully asleep in his Raised Dog Bed on the doggy patio.