What Happens to Retired Military Dogs?

Here at Tuffies Dog Beds we have been supporting the amazing charity, Heropaws. Please have a look at their web site https://heropawsuk.co.uk/

Heropaws is a new charity and their aim is to take care of the working dogs that have served in the military and are ready to retire. The ex-military dogs are in great need of homes as they can’t stay with the army once they have stopped working, but they need a little time to adjust to civilian life before they get their forever home. Heropaws aim to be that middle step between military and civilian life in order to ensure that the rehoming is a success. 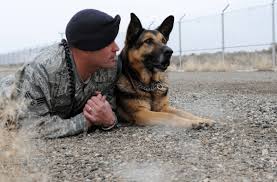 Angie McDonnel is a paramedic in the military and while she was stationed in Afghanistan, she fell in love with the guard dog, Vidar. He is a Begian Malinois. After Angie had left the post in Afghanistan, she was made aware that Vidar had left Afghanistan later on and was now in Germany to help at the dog handler training facilities. It turned out that Vidar’s soft temperament couldn’t cope with Afghanistan, but as an intelligent and well trained dog, he still had a role to play in training other dogs. As it turned out, Vidar had picked up a degree of eye problems from an accident in Afghanistan  and eventually he had to be retired even from training.

Someone with their heart and head in the right place remembered that Angie was a big fan of Vidar and contacted Angie to see if she would take him as he now had to retire at only four years old.

Vidar came to UK and Jamie, a military dog handler, helped Angie train Vidar in preparation for his new life. As Angie said, when he was finally ready to go to his forever-home at Angie’s, he simply  walked in, made himself comfy in his dog bed and looked like he had been a house dog forever.

With the right training, these dogs make great pets and companions.

How are Military Dogs Used?

The army use dogs for sniffing, scouting and guarding.

Nothing can substitute a dog’s nose and with the right training, dogs can learn to detect bombs, drugs, arms, bodies etc etc. All the training for this is a game for the dog and they love it.

The dogs can be invaluable for tracking down suspects. The presence of a large, intimidating dog is enough to put fear in to anyone and the dogs are also trained to bite and grab the suspect running away. They are finely trained to only bite on command, making them trustworthy and precise.

With modern equipment the dogs are able to wear a vest with cameras and microphones so that the handler can get an idea of what is in the area their dog is scouting.

All the military dogs have to learn a lot, be brave, have initiative at the same time as being loyal. They have to learn not to be phased by strange environments and they need to be ok with joining their handler jumping out of an aircraft. So it may be hard to see how they can adjust to becoming pets.

The Transformation to Pet Life.

As Angie with dog handlers Amber, Jamie and Sam are fundraising in order to make all the rehoming work happen, there are dogs that retire from the military, who need new homes. The aim is to have kennels with space for 50 ex-military dogs in their process of re-homing-training. Heropaws will also take other working dogs in, such as police dogs, but it will mainly be the military dogs.