Dexter the Labrador, the Paint Shop, and Puppy Tuffie Training

Scott Annison, the owner of the painting and decorating supplies shop ‘Trade Secrets’ takes his 6-month-old Labrador, Dexter, into work with him. He talked to me about the decision to get a dog over lockdown and the pros and cons of having him on the shop floor. We also have some tips for toilet training, car training, and teaching ‘settle’ to your dog while you work.

Biting the Bullet
Scott and Leigh had been planning on getting a dog for a few years before they decided to take the plunge over lockdown. They both own their own businesses so saw this as an opportunity to take some time out of their busy schedules to focus on puppy training. It was by chance that a customer of Scott’s painting and decorating firm had a pregnant lab with puppies still for sale. It was important to Scott that his staff at Trade Secrets were happy to have a dog on the premises – some folks just aren’t ‘dog people’, don’t ask us why! There were none of these weirdos in Scott’s shop though so puppy plans were full steam ahead. 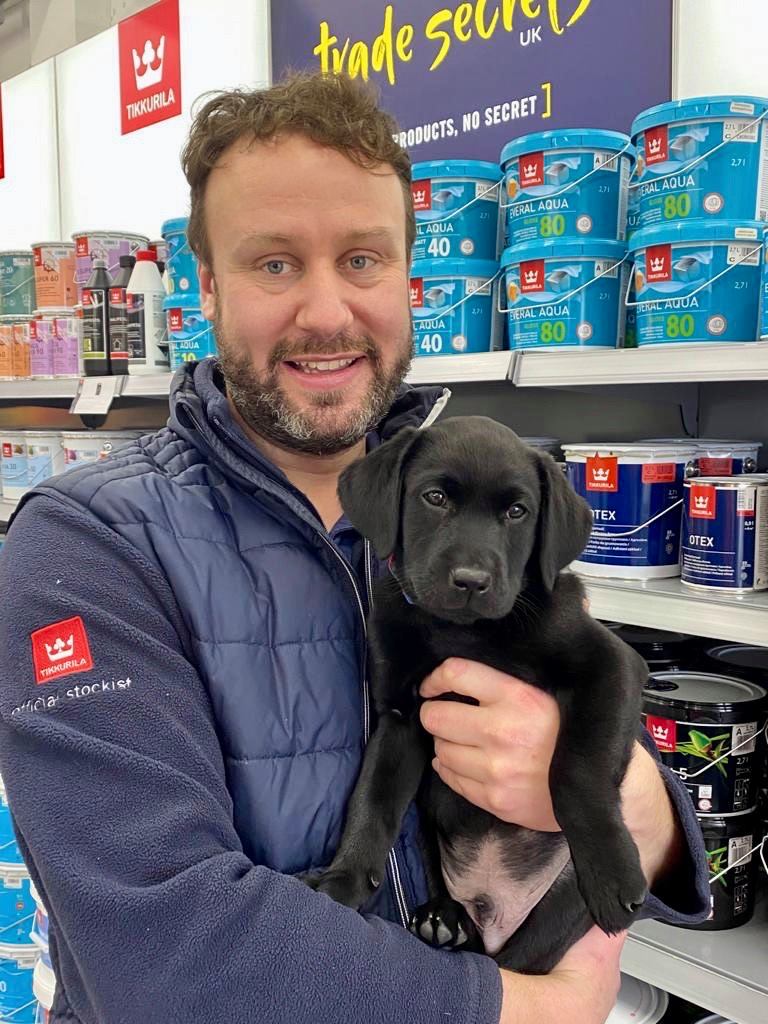 Scott and his new puppy, Dexter, in front of paint tins at Trade Secrets

Scott rightly went through a list of criteria multiple times to make sure he was ready to have a dog in his life. There have been loads of horror stories over the last year about puppies that have had to be found another home because their owners, despite having plenty of time during lockdown, simply weren’t ready for the full-time commitment that a dog imposes on your lifestyle.

Employee of the Month
Dexter was a hit with employees and customers alike from the moment he entered Scott’s shop. Shopping for paint is not exactly the activity of choice for most kids but the presence of a Labrador puppy changes things completely. In fact, there was a role reversal overnight as parents struggled to persuade their kids to leave Dexter behind when they were ready to leave! Scott said there had been a few occasions when he’d left Dexter at home with Leigh and returning customers had been crushed with disappointment to discover he wasn’t there. So from a business perspective, Dexter is definitely employee of the month. He’s not afraid to get his paws dirty either, here he is putting in the manual labour hours over Christmas. 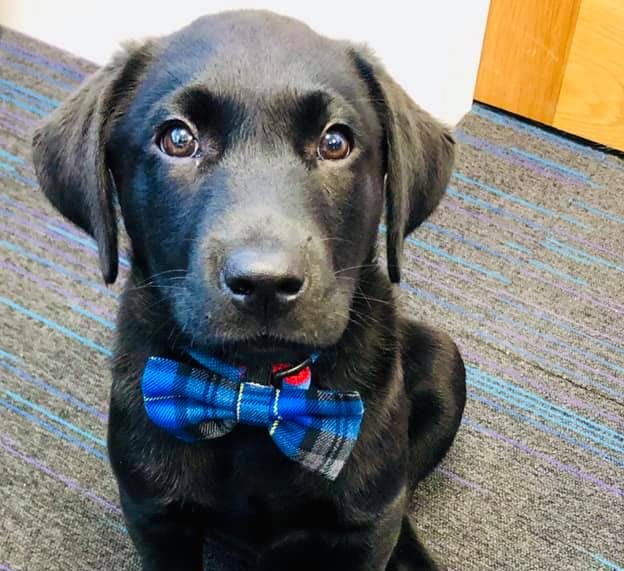 Dexter the black Labrador with his bowtie

Having Dexter in the shop comes with its challenges too. Like 99% puppies, if left to his own devices he’ll have a chew at anything and everything and that’s especially detrimental if it’s a product for sale. Another issue is his appetite for human food. Labradors are famous for having an insatiable appetite and an athletic enough build to satisfy their cravings wherever that food may be. Scott said you can almost guarantee that any snacks left on a desk with Dexter when by himself will be gone by the time you get back. Until they learn their boundaries, a good solution is to distract your dog by leaving a frozen kong on their Puppy Tuffie when you leave the room so they are less likely to explore the contents of your desk. 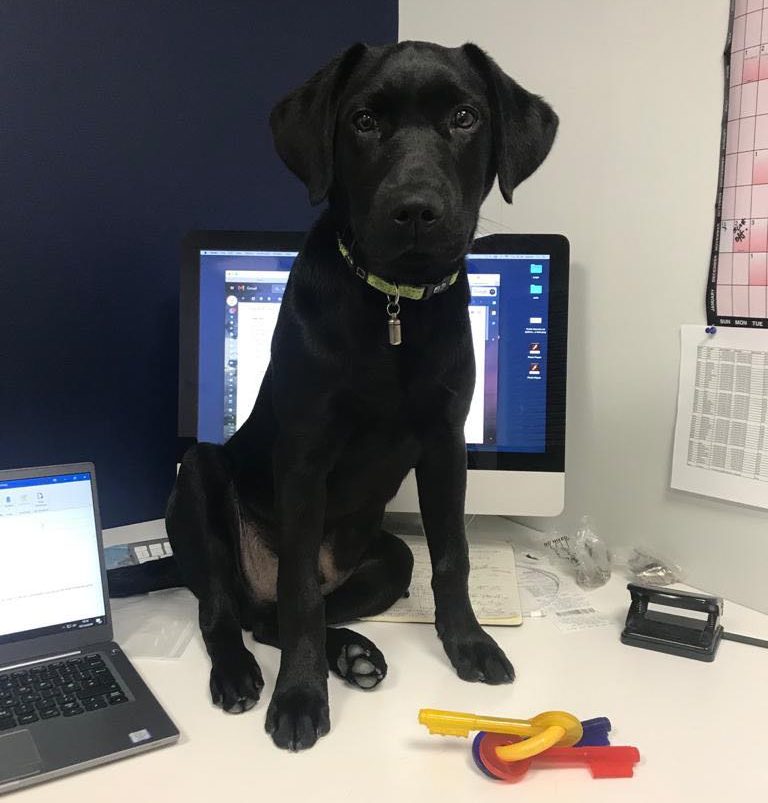 Teaching ‘Settle’
Unfortunately, frozen kongs will lose their appeal if overused so try and save them for special occasions when you need to leave them alone. When you’re there, teaching ‘settle’ is a great way to get your dog to relax in their bed, allowing you to get on with work without having to play the role of the fun police. Start by discretely dropping treats from above when they go and lie on their Puppy Tuffie, it is important not to directly feed them because that will teach them to focus on you instead of entertaining themselves with a toy or sleeping. Progress by dropping more ‘sky treats’ when they put their head down or make themselves comfortable, eventually adding a soft ‘settle’ command that you can use in future when you need to get on with work. It goes without saying that using ’settle’ is hopeless without adequately exercising your dog, so be sure to physically and mentally tire them out before you ask them to relax. 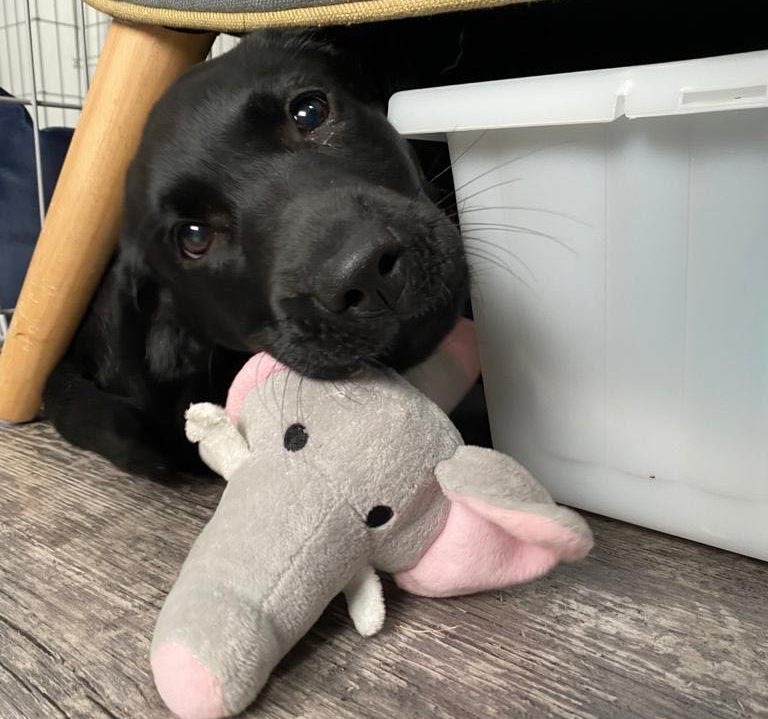 Labrador Dexter with his Elephant Toy

Toilet Training
Dexter is pretty good for waiting until he’s outside to toilet but he does still have the odd accident in the warehouse. He also prefers to go on grass or rough gravel chuckies, which isn’t as uncommon as you might think. If your dog doesn’t naturally do this then you might want to consider getting them into the habit of it to avoid them stopping and squatting in the middle of a busy pavement. Another tip for puppies is to take them out as soon as they wake up from a nap because they will almost always need to go. During awake hours use the timer function on your phone to maintain regular outings. 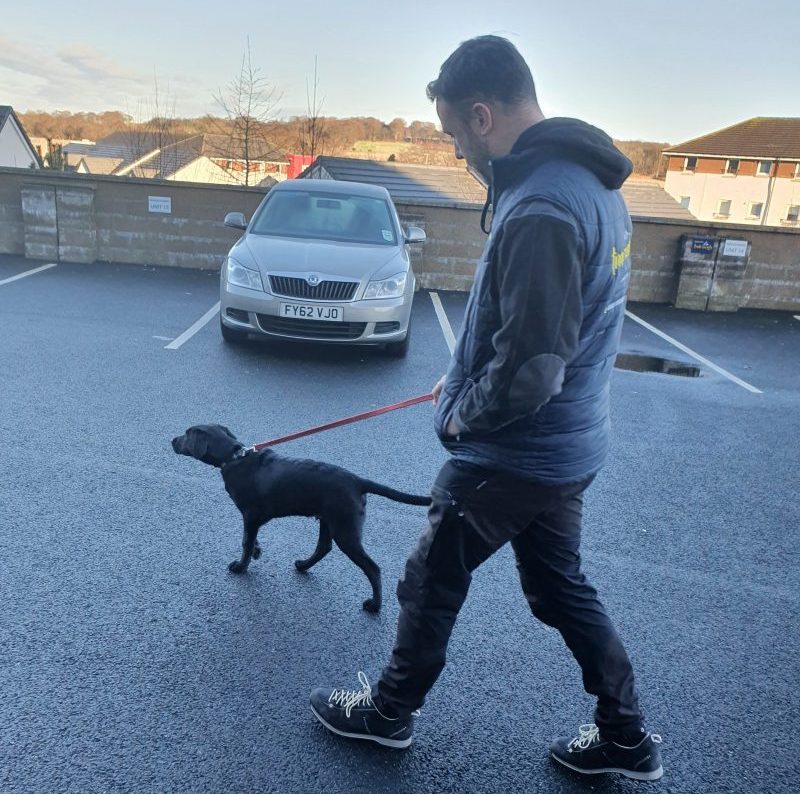 Black Labrador Dexter on a Lead Outside

Car Training
Travel training is often overlooked but getting your dog used to the car could save you a lot of trouble on your next trip. The aim is to get them accustomed to being in the car whilst on the road or by themselves when parked if you have to leave them for a short while. They need to be free from separation anxiety and happy to observe passers-by without barking. It’s not unusual to see dogs up against the windscreen going crazy in the supermarket car park and they’re much more likely to pee or chew when they’re hyper-stimulated like this.  Start by rewarding them with treats from the moment you put them in the car, don’t turn on the engine yet just sit with them and make the car a positive experience from the outset. Having their familiar Puppie Tuffie or blanket in with them will make it less daunting. Progress by turning on the engine and eventually driving a short distance, remembering to reward especially for quiet and calmness. Over time slowly build up distractions such as passers-by and other dogs, again rewarding for good behaviour. If possible, do as Scott and Dexter did and have them in the car as a puppy but don’t worry if you’re starting late, old dogs CAN learn new tricks!

All in all, Dexter and Scott have a great set up between home and work life. Dogs more than anything just want to be with you out and about, so the more ways you can find to integrate them into your daily life the better.

Nice to meet you Dexter! 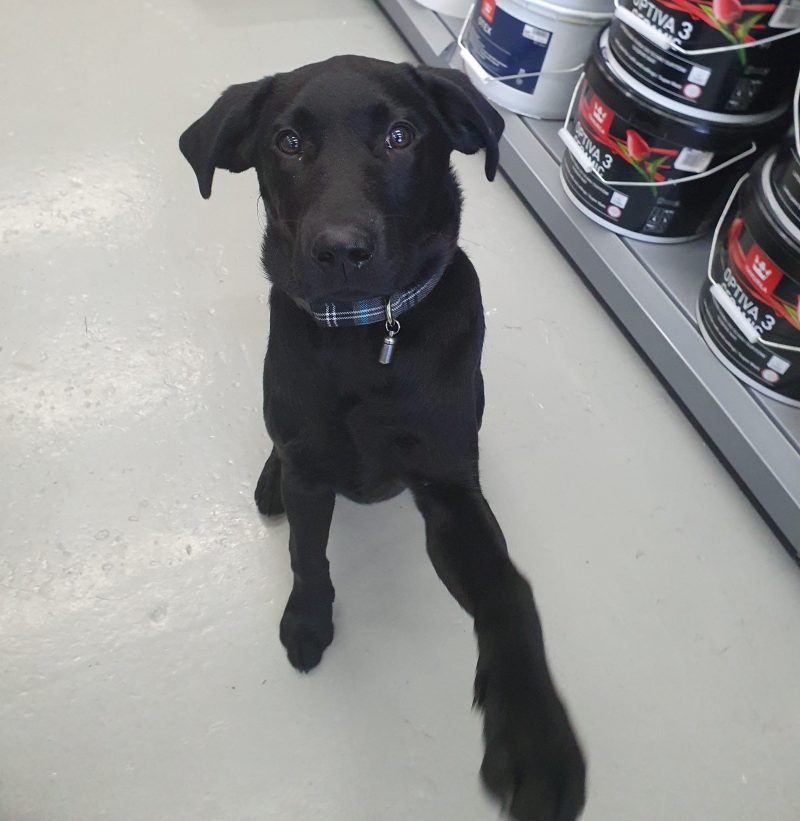