At long last it is time to get back out with the pointers, forgetting about dog beds and chewproof dog beds or the otherwise, lovely, Tuffies in general. This is the time of year where we can start counting grouse broods to see how the birds have faired during the breeding season. It is really the first wild bird we can disturb because the grouse live so high up that their breeding season is relatively short. By the middle of July the chicks are big enough to be unaffected by being disturbed by dogs and people. Birds like pheasants, on the lower grounds, can still have young that should not be disturbed in July.

We set out last week to count on two grouse moors. These moors are only used for walked up as the grouse density is never high enough for driven days. On Thursday we went out on the moor near Aberlour in beautiful sunshine and a light breeze, just perfect for the dogs. You need a nice little bit of wind for the dogs to use the scent in the wind for finding the birds and it also helps cooling the dogs down. Heat is one of the struggles when you work the pointers (especially the German Wirehaired Pointers) in July and August. As you work the dogs hard across the heather, you can see their concentration goes partly on finding birds, partly on finding water. They crisscross back and forth, back and forth and then suddenly SPLUSH, they dive into a little peaty hole of water and swim and drink before they, just as suddenly, leap out and carry on with the job. What we found this year was a bit unusual: both the Aberlour moor and the one we counted on the Friday near Forres, had a consistent pattern of grouse pairs with VERY young chicks for the time of year. Several times I had either Tippex or Gollum on point and when I tried to get the dog to flush, the dog seemed sticky, not wanting to go. The alternative then is to walk in yourself and ”kick” up the heather to find the birds (chicks). Most uncharacteristically for the time of year, we saw several scenarios of the grouse hen flapping away, dragging a wing, pretending to be wounded. This, of course, is a trick to make the ‘predator’ leap after the hen and the instinctive idea is that the hen will lift and save its life while the dog (or fox) will have lost all sense of where the tiny chicks are sitting. It does make you wonder how well this is working because you can often hear the chicks peeping in the heather. This is great training for the dogs’ steadiness. I watched a hen land deliberately in front of Gollum’s nose and then run in front of him with a wing dragging. With me blowing the whistle, he just starred at it in a bit of a trance. 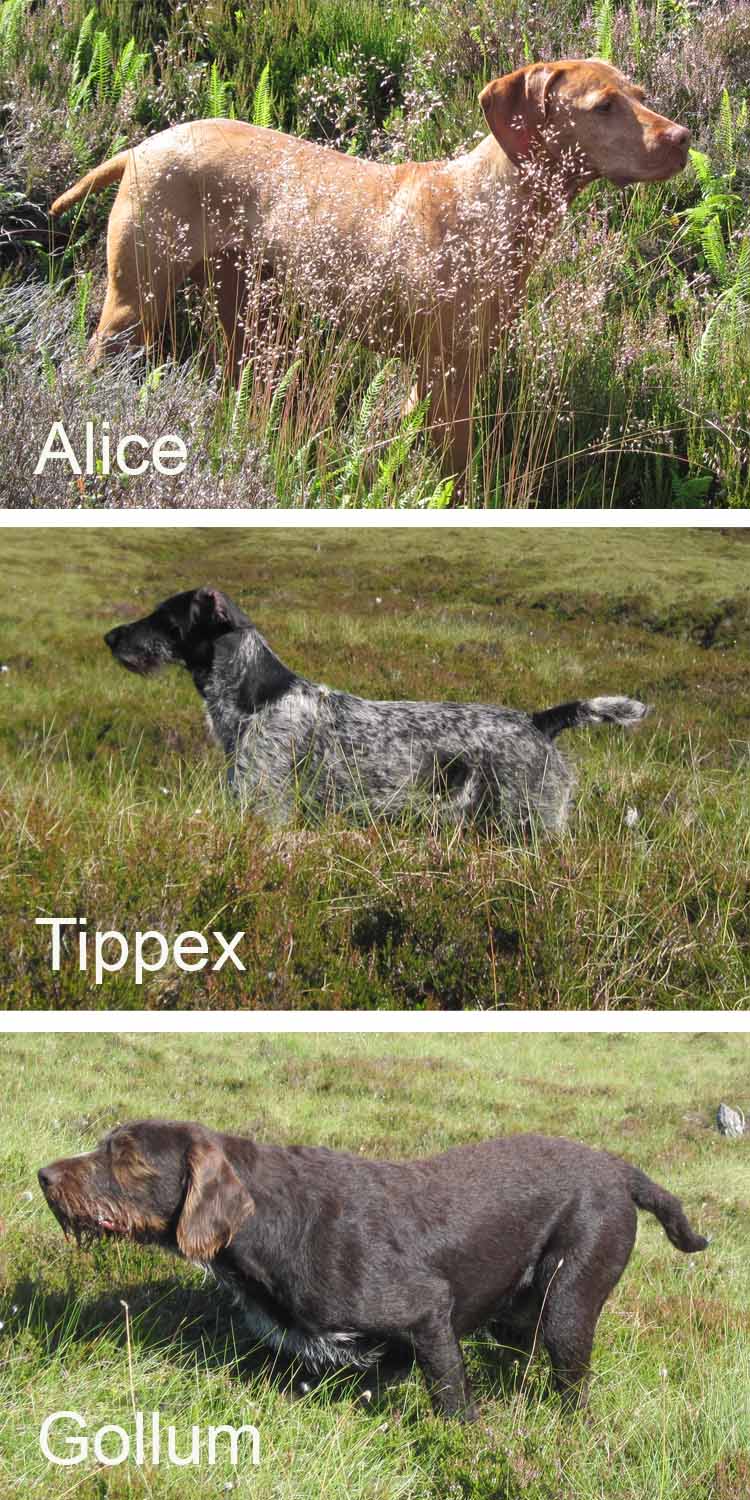 The conclusion of this preliminary count seems to be that the grouse had an early brood in the spring, but the bad weather killed the young birds in June. There is a critical time for the little chicks when they are too big to all fit under mum’s wing, but not yet waterproof enough to survive wet days. This loss of offspring then triggered off a new clutch of eggs and it is the result of this late brood we are finding now. This is pretty bad news because the general consensus is that late chicks like these are not viable. They will not be big and strong enough by the autumn to cope with the possible horrendous days of cold, windy and wet weather.

And it is bad news for shooting as they are simply too small to justify shooting by 12th August.

We are going to count a grouse moor near Aviemor tomorrow and Tuesday and I will revert with the news from there. It is not looking hopeful, but this is the fascinating thing about wild quarry: you just never know.

One thing is certain, on a purely personal level: it was jolly good to get out and not think about Tuffies or dog beds in general for just a couple of half days.