Call our team 01888 563288
Handmade in scotland for active dogs
Free delivery on all orders for mainland UK
Posted on September 3, 2011
Share this

The grouse season this year

It is with some apprehension that I write about the last three weeks of grouse hunting on the Scottish moors because it is, of course, not everyone’s cup of tea. However, if I start by addressing some of the right reasons for going grouse shooting, it might inspire some of you to think differently about shooting wild birds. As we live in an artificial eco system, there is no way of just leaving nature to it self because even on the remote moors of Scotland, nature would never find any kind of balance and it would result in an unhealthy bio diversity. The way moor land is managed for grouse shooting results in a healthy grouse population along the provision of fantastic habitats for other birds and mammals. Grouse need heather, but they also need water holes and wet areas in order to promote insect production and they need the berries and cotton grass. The heather burning provides fresh heather growth and is only burnt in small patches, which means that the tall surrounding heather gives easy access to shelter and cover. As you walk over the grouse moor, you notice such a rich flora and fauna that it is very obvious that the vast amount of money spent on grouse shooting benefits all kinds of other species.
A few years ago I read a figure of £17 million being what grouse shooting contributes to the Scottish economy.
As we shoot over pointers, EVERY bird is very quickly despatch of and when the inevitable wounded one happens, we spare no efforts to find it and despatch of it fast. All birds are sold to game dealers, which again provides an income for the estates and food for humans. This is what we call “happy meat” as it has lived an un-farmed natural life till the day it is no more. Much better than being raised in a barn and killed on a conveyor belt.

As the dog picks up the scent of the birds, the dog handler and guns become aware of its behaviour and start walking towards it. The dog will stop on point and wait till everything is in place for flushing the covey.
Below Gollum, with the orange collar, is on point and I have walked up by his side with Tippex. Matt is ready with the gun. 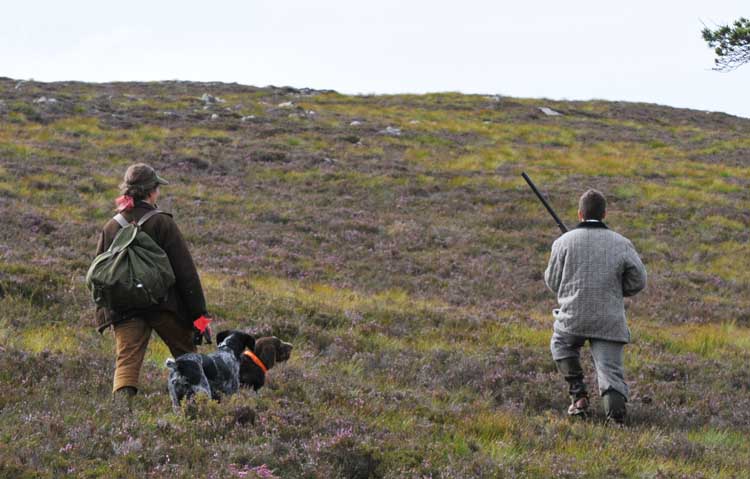 Some times I will use Gollum for picking up, but mostly I use Alice. 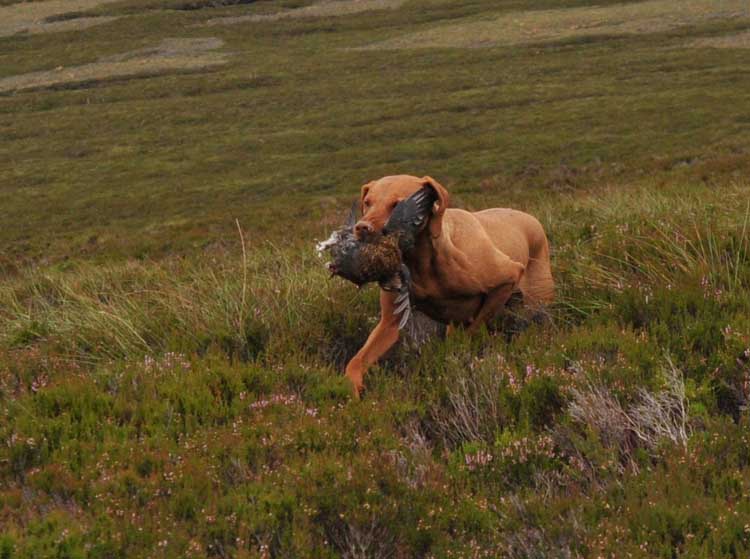 This year the grouse count in July indicated that the breeding season was tough and that many grouse pairs lost their young in the wet June weather. Many pairs then had another cluster of eggs, hence the young birds in July. However, by the 12th August we didn’t run into too many situations where young birds were flushed and could not be shot. The fact is that it is perceived as bad practice to shoot young birds, but in reality it is doubtful whether these young birds will be fit and strong enough to survive the winter anyway.

What DID dominate this year as an annoying trend was how flighty the birds were right from the beginning of the season. Very often a dog would be on point, but the birds would sit up and look out. Obviously, as the party approached, the birds took off. It made it difficult and it was a bit of a mystery why this was so common. This normally happens a lot later in the season, but we have had days of flighty birds right through.

Below Heidi is on point, but the birds are standing in shallow vegetation looking at her. There is no way we can get near them.

There are still four days work next week and I will revert with some blogs about the dog work when I get the time.