Pick of the Litter

The time has come to get the next generation going. Alice is nearly 10, Tippex is 7 and Gollum is three years old. Getting a new puppy is essential now in order to be ready for work in a couple of years when Alice is too old to work and Tippex needs more frequent breaks.

With premises permanently occupied and cctv covering both work shop and living quarters, I am ready to take on another precious member of the family.

This time I was lucky enough to have the first pick of the three bitch puppies in a litter of German Wirehaired Pointers bred in Denmark. I went, with my pointer friend, Anne, to spend a couple of days with the puppies. Needless to say it was important to see the parents as well and I immediately liked the dam. A good looking and relaxed dog with the hunting instinct I am looking for.

We also went to see the sire at a field trial and, although he missed a partridge pair and was out of the trial, he was the sort of dog I like with hunting pace. 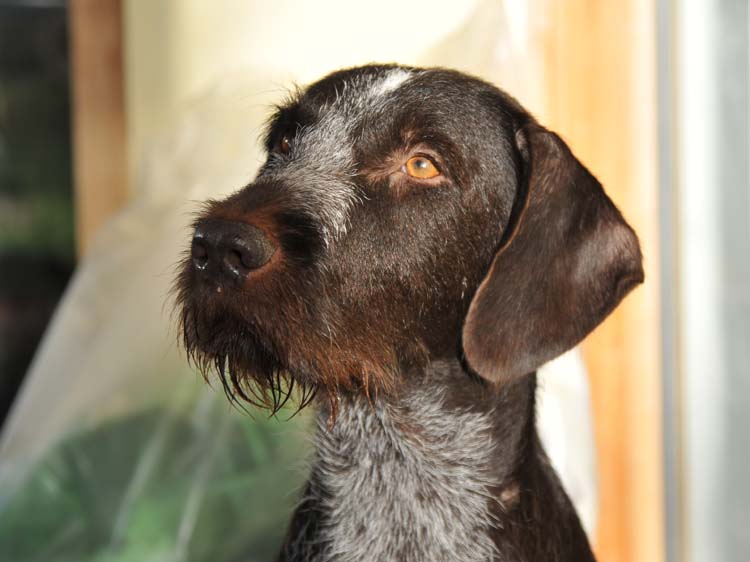 Choosing the best puppy takes a day or two. Depending on whether they are sleepy or hungry, they behave differently all the time. Choosing a puppy is also a personal thing as different people look for different things in a puppy. As we walked in and saw the whole lot (six puppies in total), one little bitch came tearing over and said hello, while the rest were a little weary at the new people at first. One of them was not quite as inquisitive, but happy to investigate things around us and one was at first sight the ugly one as she didn’t have much coat, ie would maybe not become a typical wirehaired pointer to look at.

As the time went on and we played and studied the puppies, I arranged them in the order of my choice.

First: She is mine and therefore called Gaia. She is the inquisitive, but not totally forward one. The holding-down-test was good with her. I put her upside down and held her down by fixing my hand on her chest. First she wiggled a bit, but then she either looked at me or she accepted the restraint and looked at the world from her new upside-down perspective. A sweet little character that loves the world, but doesn’t need to rule it.

Second: The, apparently, ugly one with not enough coat and so far no beard. She reminded me of my Vizsla, Alice, as she was a bit more shivery in the cold and therefore liked to come to a human and get in under the coat for warmth. She would lick your ears and nose, but not bite constantly. I have chosen not to have another Vizsla as they don’t hunt quite as keenly as I would like, but there is a lot to be said for their nice characters and huge attachment to their humans. I am confident that she will have the drive and possibly be nice to handle and a great companion. She was my second choice.

Third: The little flee that came to greet us at first. A super character, which I would like someone else to take the fight with. She was the first to discover that she could get hold of Anne’s gloves by going further up the stairs than anyone else. She would have been the first to get out of the dog bed in the whelping box and she was not having ANY pinning down. At the holding down test, she simply fought till the end. She was also the one that had the most tendency to bite while you held her. She seemed to be the one with the least interest in people.

I made my choice and here she is. Now we just have to wait for inoculations, passport and transport arrangements. 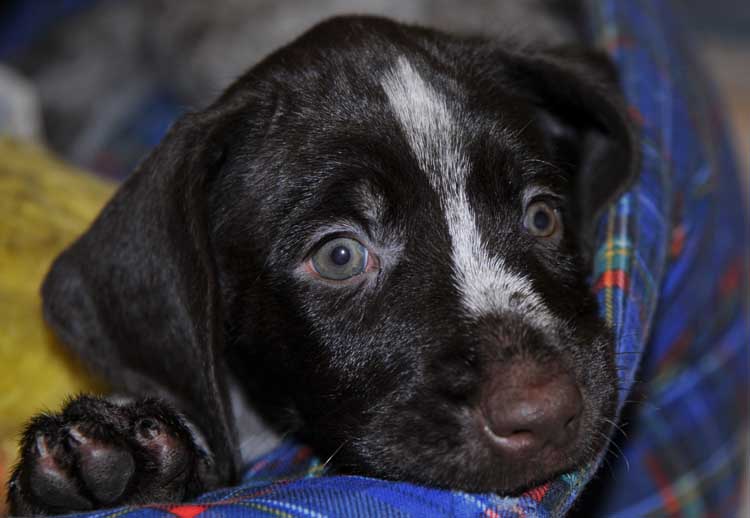