Call our team 01888 563288
Handmade in scotland for active dogs
Free delivery on all orders for mainland UK
Posted on February 26, 2014
Share this

The last blog I wrote described Gaia’s first encounter with grouse hunting where she managed to have some birds shot over her towards the end of the grouse season. Since then the season carried on and she gained some more experience with other quarries, but I am of the opinion that it is better to hold back too much excitement, especially with an energetic dog like Gaia. I know that I allowed Tippex to be part of too much excitement when she was young and I don’t think it was good for her calmness in pointing situations. So Gaia has not been doing a massive amount during this winter, but just enough to get some practice and I have given her ample exposure to other dogs for the socialising purposes. In the beginning of the season, I separated the hunt-point and retrieve and only let her hunt, point and flush. All alog I let someone else do the retrieve, but in other circumstances I have allowed Gaia to have a few retrieves when it was not off her own point. There is plenty of time and she is still only 18 months. Once you have over excited a dog, it’s practically impossible to turn back that time. The end result should hopefully be a steady dog that is also calmer in the picking up situation and therefore less likely to damage the birds that will ultimately end up via the kitchen on the table. At the very end of this winter I did let her have the full experience, but mainly as a nice little outing with just me. We went out in the afternoon, I let her hunt and point and I took down a big old cock pheasant. I let her sit for long enough to calm down before she was allowed to go out and retrieve it. End of story, no more and we went home. Just nice. Mr Pheasant went in the pot as they all do.

So the most important thing in the winter 2013-2014 has been to practice and practice the hunting, pointing and flushing. The retrieving will come easily later. It’s the careful finding of birds, carefully pointing and most importantly of all, being in touch with me, the handler. As you hunt the dog into the wind I think it is nice to see “the glance” as they pass. On the photos below Gaia is hunting snipe and as she passes me, she glances very briefly and we make eye contact. For me, this is very important and it’s why you should never take your eyes of your dog because it needs to know that we are still hunting together. 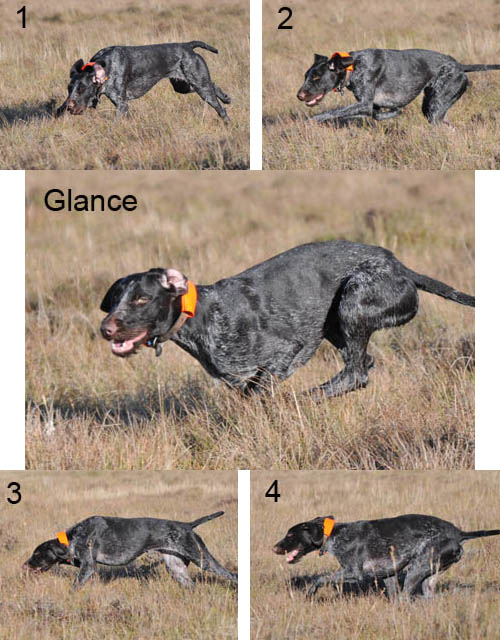 Snipe
If you run a HPR in a field trial, you are not put out if the dog misses a snipe, but if your dog points a snipe, you impress the judges. This must be because snipe is not that easy. They are jolly small as well. I am privileged to have access to a fantastic little piece of ground which is normally stuffed with snipe in the winter. There is no shooting there, but I can go and practice snipe pointing. Gaia seems to have ticked the box finding snipe and that is a nice skill to have to move on with. Here she is on a “sudden” point and later on with a nice, calm point: 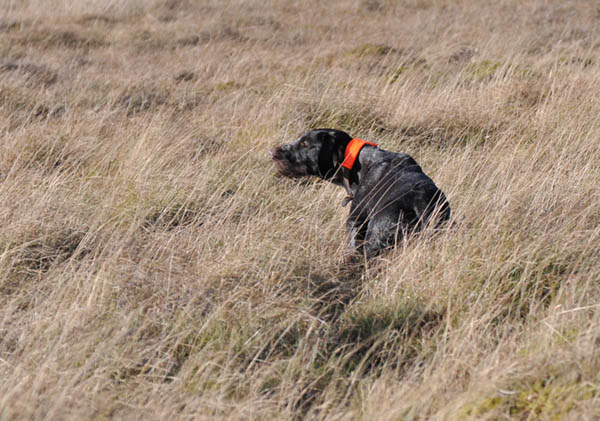 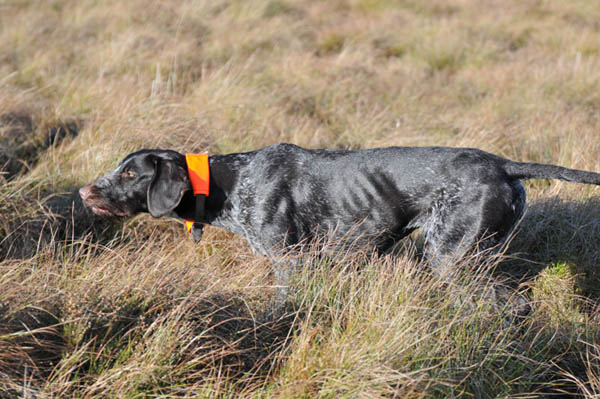 Pheasant
I also got her out on the beating line on shoots where there were only few birds and here I got the chance to take the photo of her and the bird although it is in two frames: 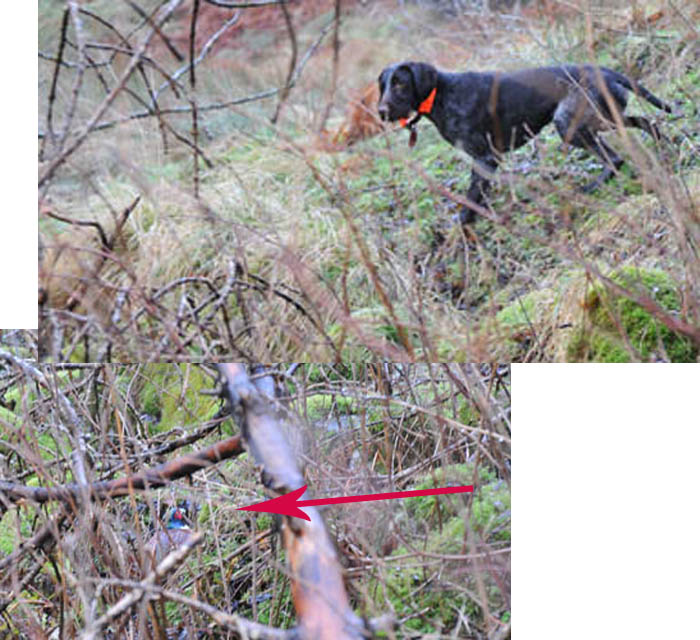 Natural on the wind
The wirehaired Pointers I have had and seen are all very inclined to hunt across the wind by instinct. Of course most of them tend to go forward a bit too much if there is scent ahead and they can therefore miss birds because they just go forward rather than thoroughly out to the sides. But without specific temptations ahead, it’s mostly a good zig-zag-zig-zag pattern across the wind.

The back wind is more of a problem as the IDEAL is that the dog should run out, away from you about 150meters, straight down the wind and then start to quarter back towards you zig-zagging into the wind. If the dog then goes on point, you will be face to face with the dog and the bird will be sitting on the ground in between you.

I do find it difficult to “let go” and allow the dog to go downwind hoping that it will quarter back towards you, but if you can hold your nerve, it’s the correct way to work the back wind. Here is a little series of pictures that I was very pleased to take as Gaia shows how she can work the back wind. So as you see the pictures, I am standing still with the wind blowing on my back. Gaia has run out 150 meters and is now quartering back to me taking one bite of the ground at a time. 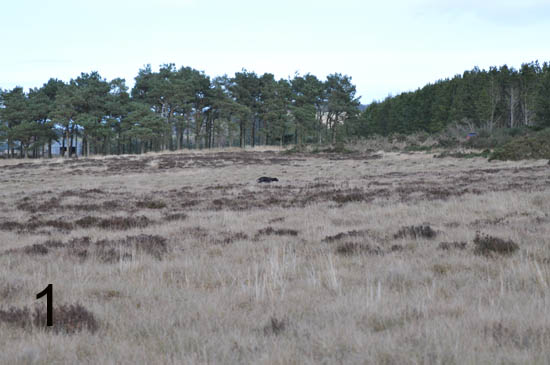 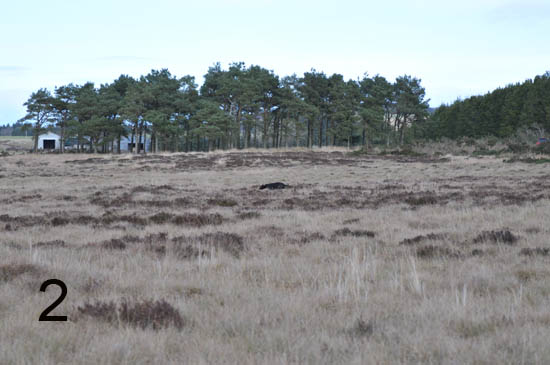 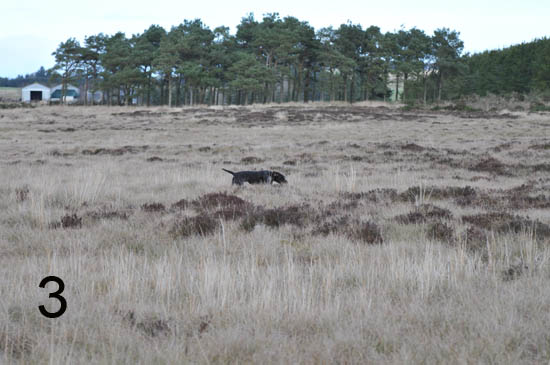 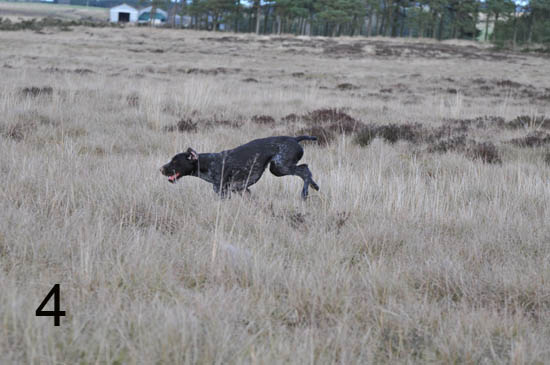 So far, so good. The next few months will be less and less hunting as the birds start to nest (although we will be running on the moor for grouse some time yet and hopefully get a spring pointing test in some time). I will work her with dummies and teach her directions for finding dummies that she hasn’t seen fall (blinds).