So, at last the season came round to grouse. Obviously the 12th of August and the days that follow are the best, but they also come with the pressure of the dogs performing in their job of finding, pointing and retrieving birds, so they are a bit serious. The brood counts, or July counts, are a lot more relaxed and they are a welcome opportunity to get the dogs trained and in shape for the hard hill running.
Young Gaia came along to the counting, but I didn’t let her run too much as she was only 11 months. It is too young to allow her body to take too much, but I did give her little runs here and there and I made an effort to allow her up behind one of the others while they were on point so she could get the idea. 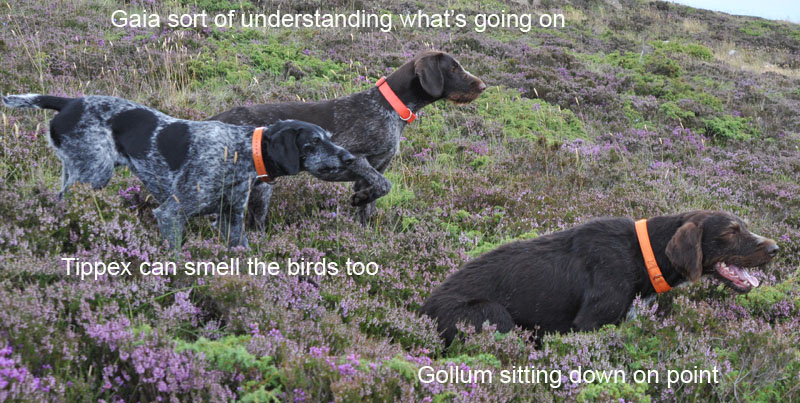 When I sent her out hunting, she didn’t really know what she was looking for in the beginning, so she seemed a bit lost. 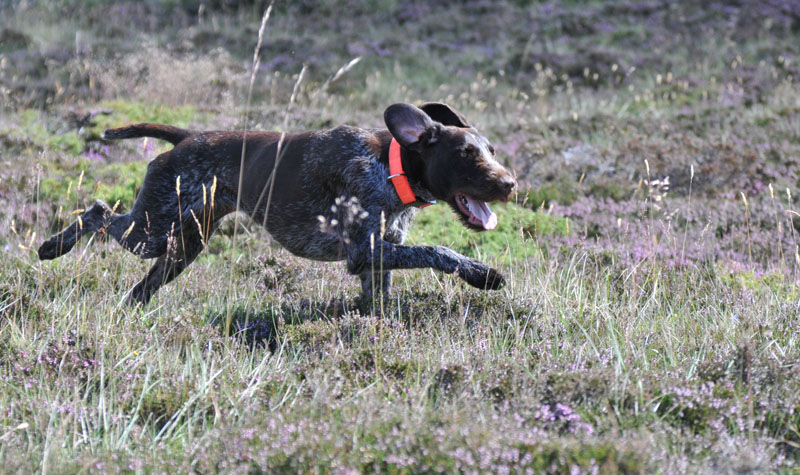 The first time she had a point she was just out of sight for a little while and I went to look. She was just behind a little bump in the terrain and she was NAILED to the floor. The pointing instinct had taken over, but I don’t think she really knew what she was standing there for. I was pleased to have carried my camera all the way as I got this snap. 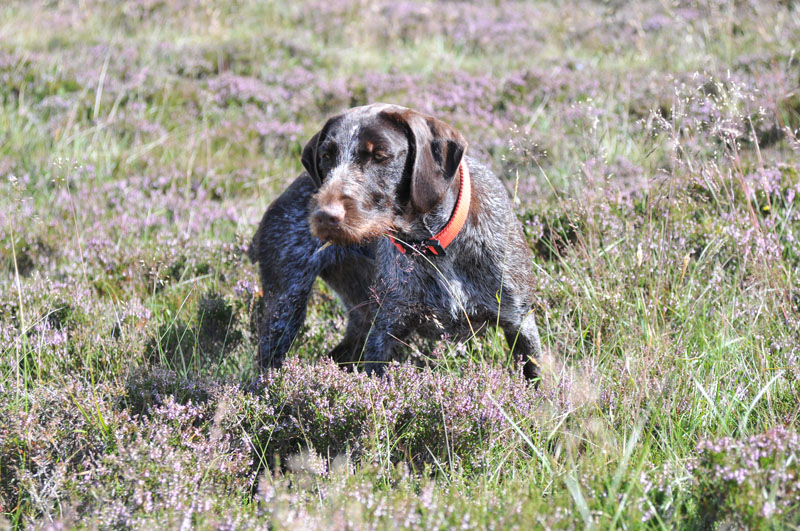 Ah, the innocence of youth. In the picture below a bird flushes out of the heather and I got a chance to take the photo. Look how Gaia just looks at the camera while the experienced Tippex is staring at the bird. The photo below that shows that she suddenly paid the quarry some attention. 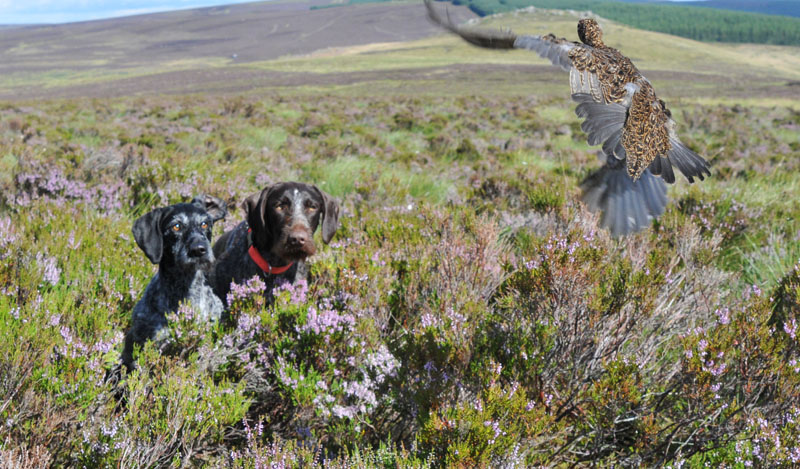 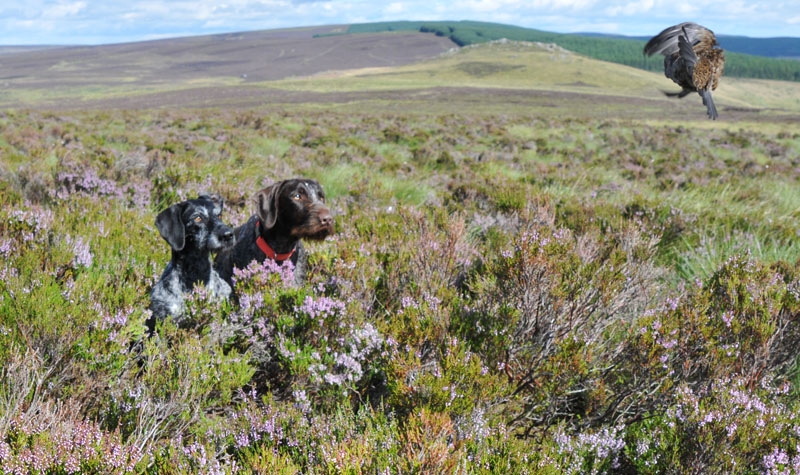 By the way, as I had the fortune of being invited to shoot on 12th of August, I thought I had better put some practice in with the clays. On a little piece of ground outside the premises, I fired some clays and shot at them. It didn’t take long before Tippex defied the garden fence and turned up, sitting beside me as a peg dog marking all the (unfortunately un-shot) clays falling. Desperate for a retrieve, I allowed her to fetch: 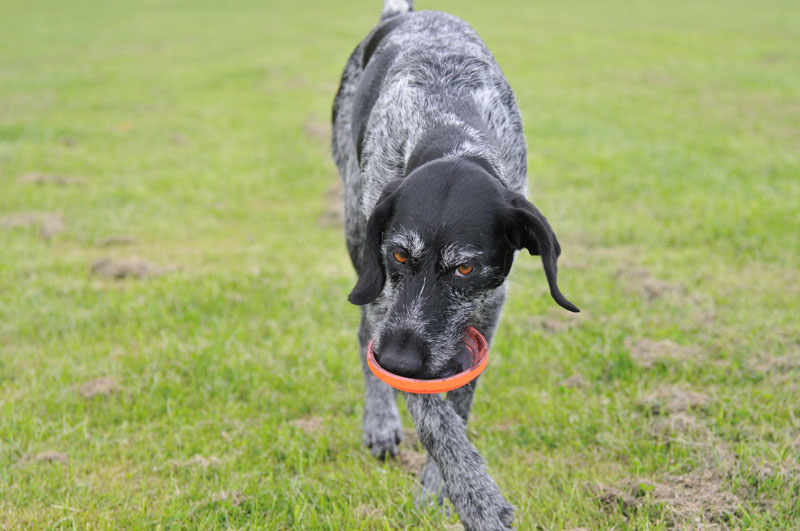 As we started the hunting, I left Gaia at home because I am simply a mollycoddler. I was aware that I had not trained her to shots so I didn’t take her out to the shoots just yet. Then I came home to ALL the wall insulation from the kennels spread around the garden and I knew I had one very bored dog.

So I took her along on the next shoot, which was a bit of a disaster. Firstly, from the minute we started to walk, she whined in impatience. Then, as the first shot was fired, she cowered. Well, I have had a nervous dog before and Gaia is a wirehaired, so I was not mollycoddling any more, I just dragged her with me. This went on for about three shoots and every now and then I would spot her feeling a little bit more relaxed, so I would just take the lead off her and allow her to run, which she then suddenly was happy with.

Gaia must have been out with me on shoots about five days when we were working on a patch with heaps of birds and I asked the guns if they would allow me to run my young dog for a little more. Well, she ran, pointed and had a bird shot over her. On that shoot, she had four birds shot for her and she was just sitting there in amazement. There is no more cowering and no more whining. She is just a happy little dog. 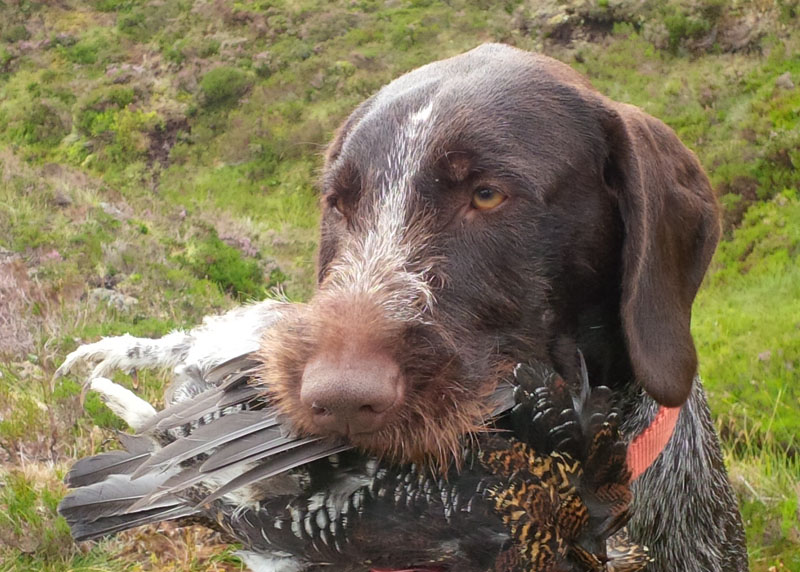 Although she is not allowed to pick her own birds up, I let her fetch warm birds that I throw for her and she is perfectly careful and respectful to the birds, delivering them to hand. Wow, I can’t wait till she can work for real.