A Stark Lesson from my Dog.

So this time of year is grouse pair counting time as described in the last blog, but there are also the spring pointing tests. I entered two and it went very well for little Gaia. Out of 18 dogs, two were awarded “Excellent” and Gaia was one of them. This was at Corriegarth in Stratherrick. She ran on the back wind and did it perfectly. This has become one of her strong points.

The following day we were going to take part in another test at Drumochter estate and drove there in the morning. Before we got to the destination, we stopped and allowed the dogs to exercise on a field. Gaia searched the field as usual and delivered a brilliant point, which I attended and a snipe was flushed. Couldn’t be more sure of my dog and walked with her, after much praise, towards the car. As we walked, a rabbit jumped up in front of us and Gaia took a couple of instinctive steps after it. As rabbit and hare chasing in a test is a cardinal sin, I used this opportunity to chastise her. With my hands pushing her down and growling at her. She is a tough Wirehaired, yes? Well, I learned my lesson : a few hours later when it was my turn to run my dog, I could not have asked for an easier task: straight in to the wind on a flat area with heaps of grouse. But Gaia, having been chastised hours earlier had lost her nerve. She simply ignored the birds. She was confused and unsure what I wanted of her, so she chose not to acknowledge any grouse. I just got my lead out and thanked the judges for their patience.I was embarrassed of my own lack of understanding my little dog. We never stop learning and I will never forget that lesson.

Anyway, I had a few more days of grouse counting getting the opportunity to get her back in to her comfort zone and pointing grouse again.  We had another go at Ben Rinnes after the last count had been snowed off and I whipped out my camera when I saw Gaia on a sudden point with her face in to the sun. Here she is:

The bird is sitting somewhere in the grass in front of her. 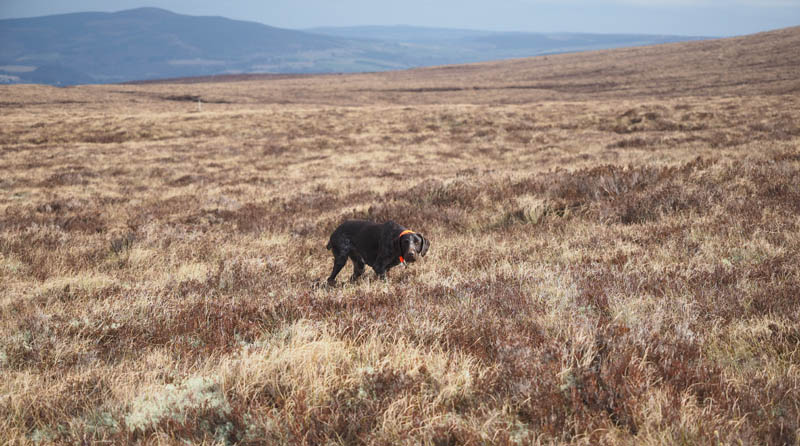 And here it goes: 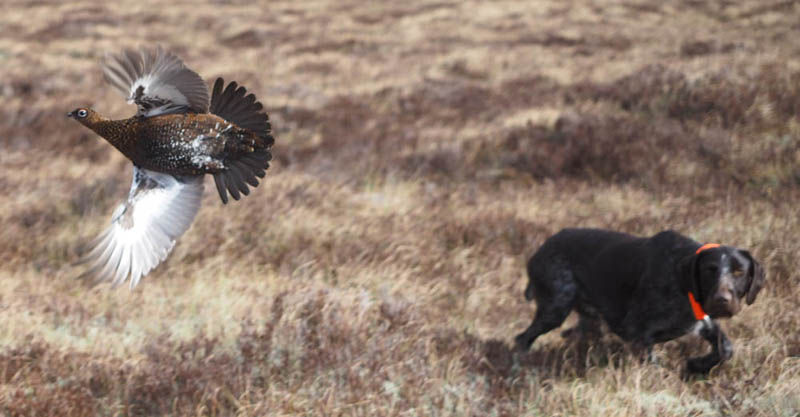 The trick is to focus the camera on the area in front of her. In the weak light conditions I need a large aperture to get the high shutterspeed for the very fast moving wings, hence small depth of focus and hence the dog out of focus. Can’t be helped.

We also counted Upper Gordonsburn and my good old Tippex is still going strong. Here she is, after a peat-mud swim, getting a scent, so she is lifted up by her nose: 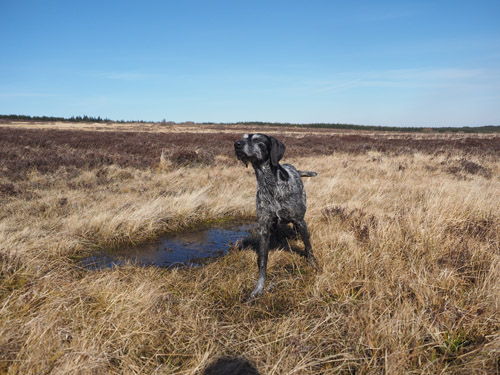 It was a beautiful day and perfect for some heather burning going on in the area. 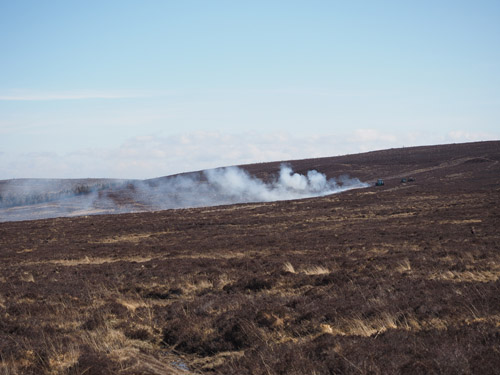 As we walked back, we hit some nice snipe type of habitat and despite the back wind Tippex pointed a couple of snipe. Here she is on point:

And here it goes. Have a good look at the little bird: 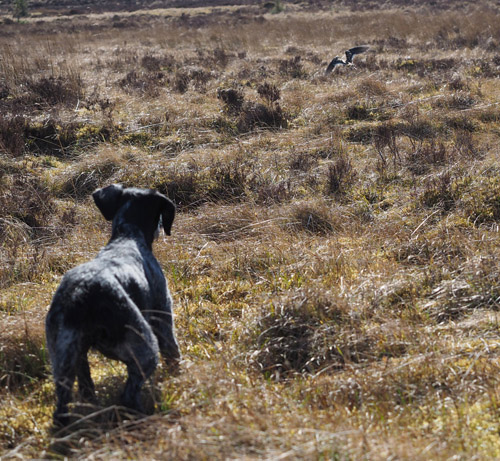 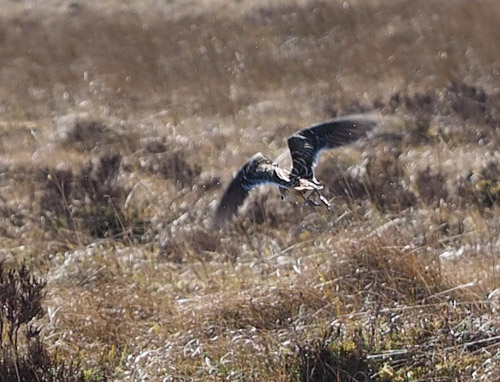