At this time of year, March – April, the grouse in the Scottish Highlands are pairing up, husband and wife. They choose their territory and stick to this, more or less. The closer it gets to the time of nesting, the more determined the birds become to stay on their chosen patch.

This is a good time to find out roughly how many, potentially, breeding pairs the moor is holding, so the grouse estates like to find out. To do this, pointing dogs have to be asked off their warm dog beds, out on the moor. And they do this happily!!!!

The spring weather is unpredictable at the best of times, but in the Scottish hills, you just don’t know and we have a saying here, which is: “When in Scotland, you just have to go anyway” because if you were put off by the seemingly bad weather or weather forecast, you would never go out and very, very often we have set off in grim weather only to have a lovely, nice day (OK, we do have a look at the forecast first to get it somewhat right).

We have been out three days so far, with varying outcomes. Two days in good weather with a light breeze, which means that the dogs get a good chance of scenting birds in the heather. The dog quarters over the moor till it gets a hint of bird scent, it moves in at a safe distance where it then comes to on point. On the first day I let Gaia work a lot as she seemed totally unaffected by the exercise and never even opened her mouth to pant. HOWEVER, her nipples got bright red, swollen and started to bleed, having been scratched by the hard heather. This only got really bad by the end of the day, so two days after, I made her a Gaffa-tape bra for the two worst affected nipples: Two bits of make-up wipes over the nipples and Gaffa-tape stuck to the tummy. It fell off at around 3pm, so she got the benefit of it.

Gaia with her bra: 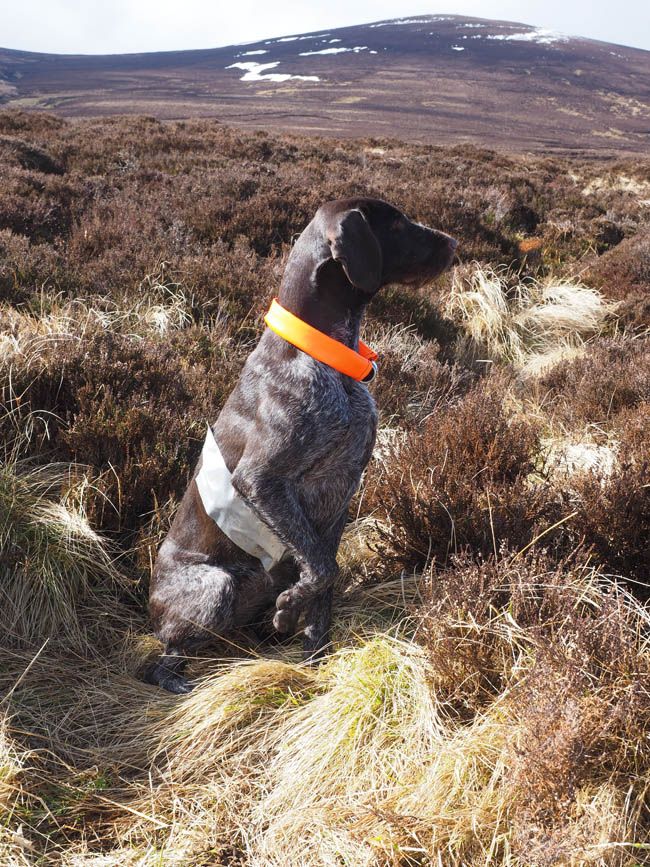 Gollum, now six years old, having a good shake before the start. Good old boy, he know what it is all about. 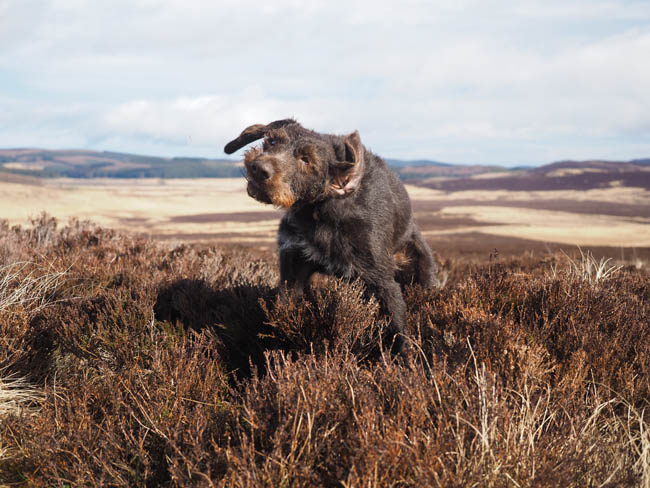 Tippex is nearly 10 years old. She is a small, nifty dog and is still going strong. She might not work for the same amount of time for each run, but no problem with the quality of her work: 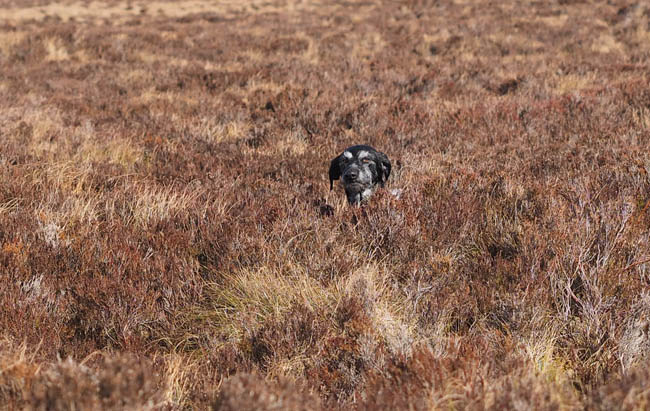 We then set out to count the birds on Ben Rinnes today. We had seen the forecast, which showed that we would probably be ok as the snow would be further west. We met in glorious sunshine, although the wind was brazing.

At first, a few snow flakes: 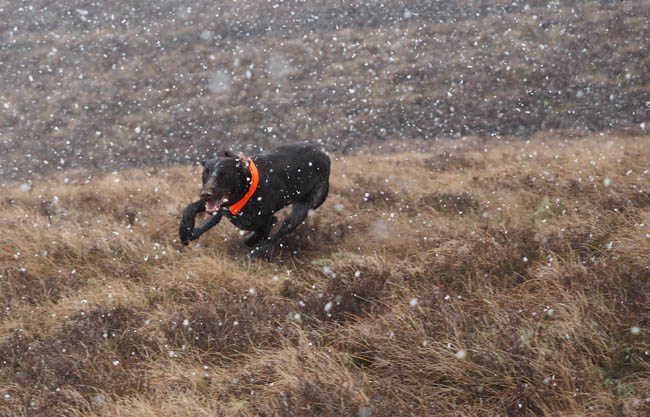 And some more, but nothing to stop the dogs getting on with the job. 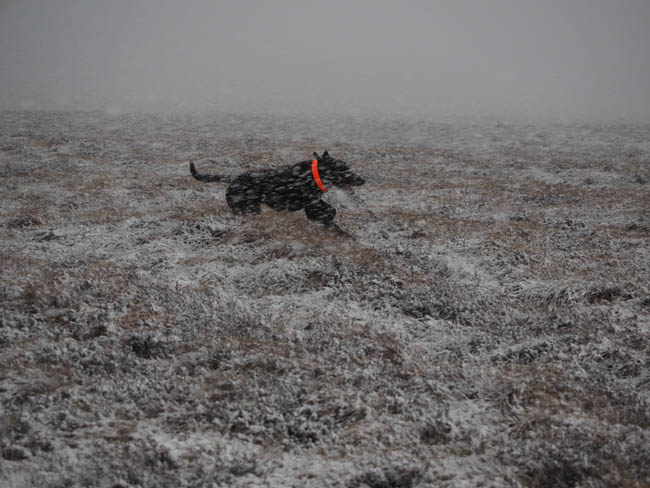 Then, as the weather closed in, SPRING-pointing was a bit of a joke. In the end we decided to abandon the walk, but we were four people spread out in a line: Us two pointer handlers on either flank (Anne and me) with two ‘keepers in the middle. The message came over the radio, so I turned round and thought I was walking back. I should really have known which way I was walking due to the wind direction, but I totally lost my bearings and I couldn’t see the contours in the terrain. To my LUCK, Gordon could see me and called me on the radio to look for him. He was upwind and I could hardly look that way due to the stinging snow flakes in my eyes. Phew, I think I could have got totally lost in the snow and I understand now how accidents happen.

So I found Gordon and Dick and Anne and we walked back. The dogs didn’t stop their work and we still found some birds. 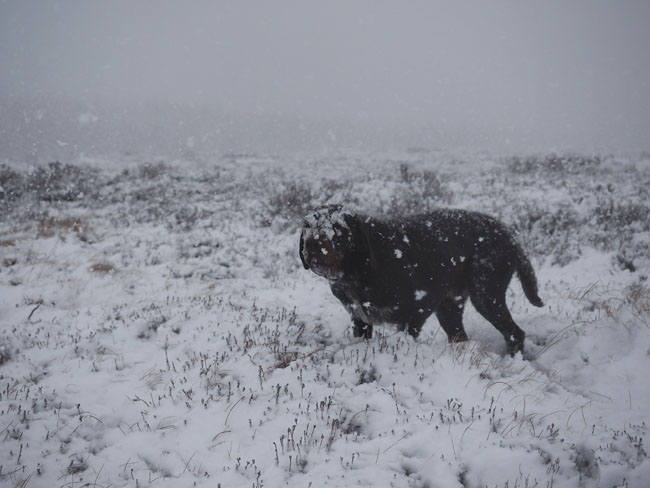 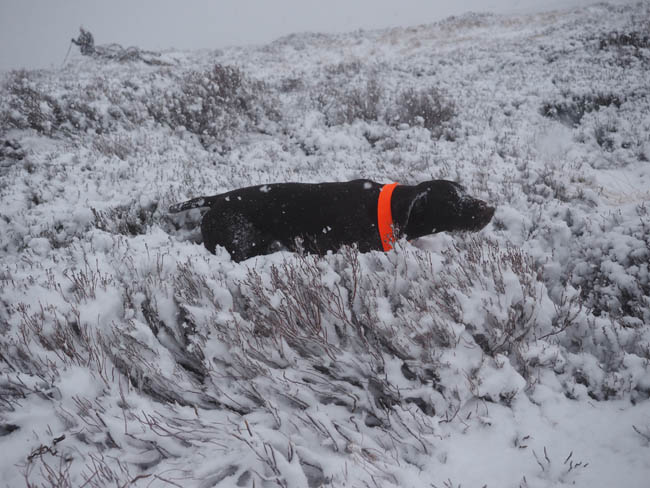 In the end, we simply had to abandon the count, a bit annoying on 30th March. 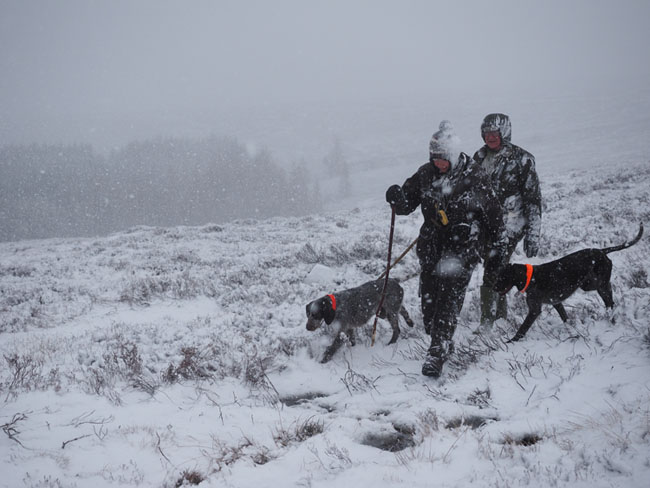 Still, a grand day out.

The dogs are now sound asleep on their dog beds.