The Pups are now Four weeks.

Having been cut off from uploading photos due to lightning burning a load of equipment, I can now resume the blog.

Here are the four-week portraits. 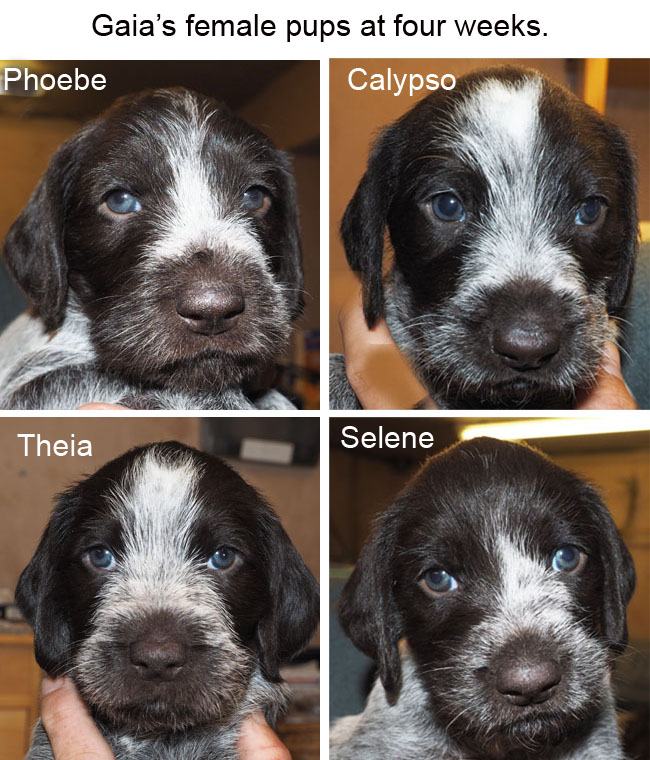 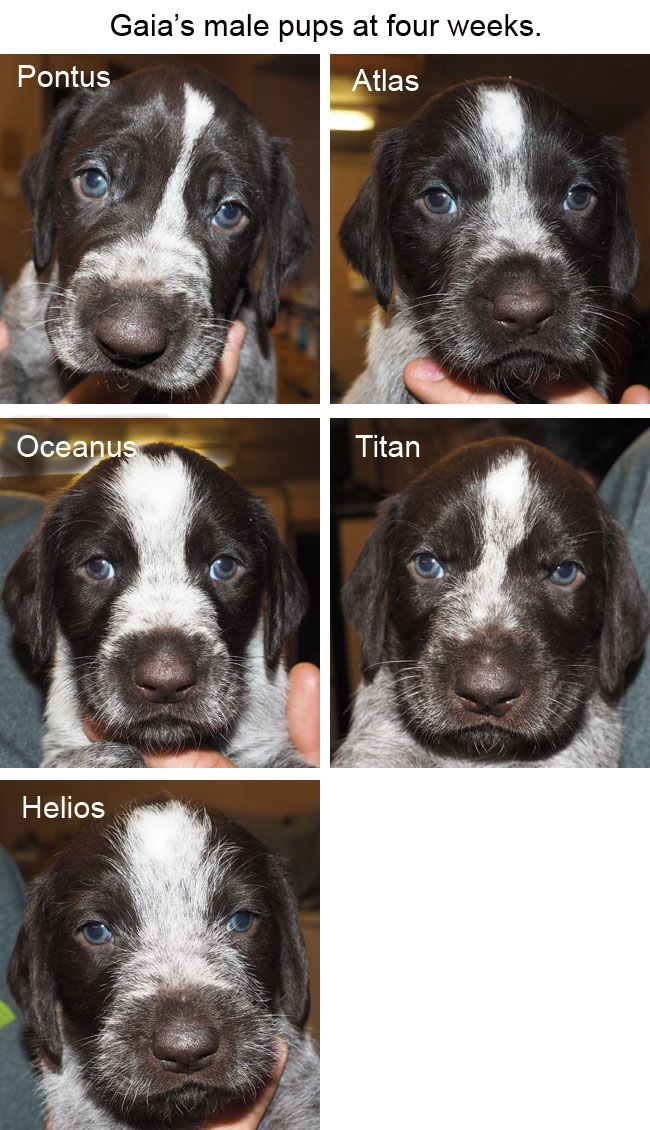 The pups now really appreciate one another as playmates. It is not only chewing each other’s ears and noses, but they are also using paws and have started toppling each other over in play. 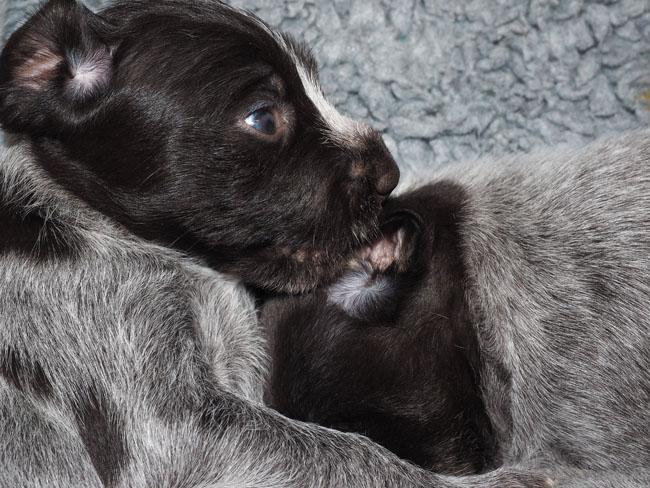 Now the ears are bigger, they are good for chewing on. 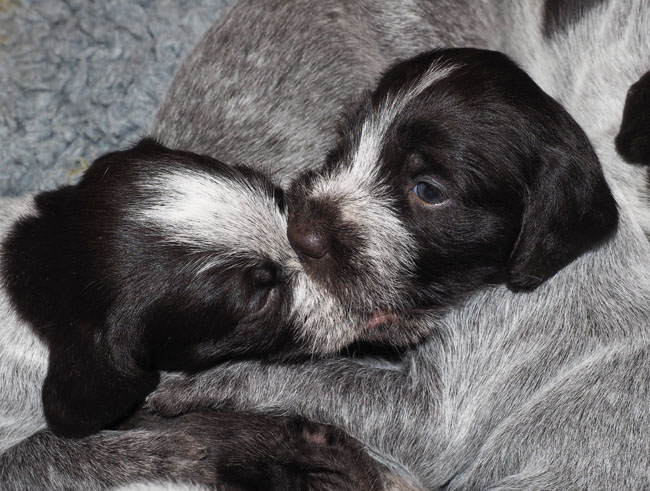 Phoebe with Theia’s nose in her mouth. 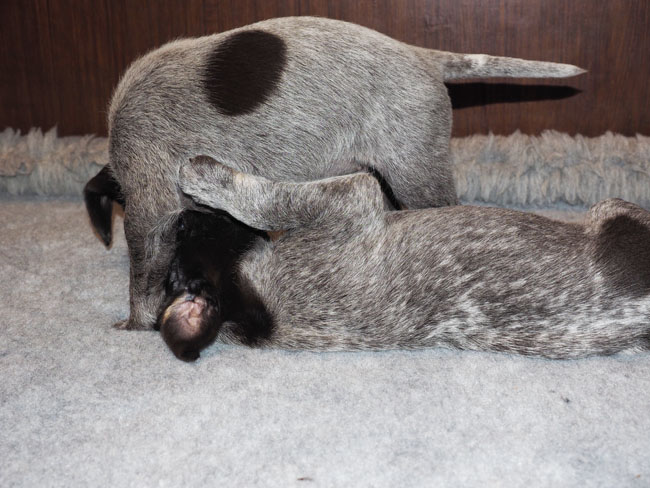 Gaia is mostly feeding them standing up and never for very long. She is definitely weaning them, but it has not changed the steely determination by the pups to get the milk. 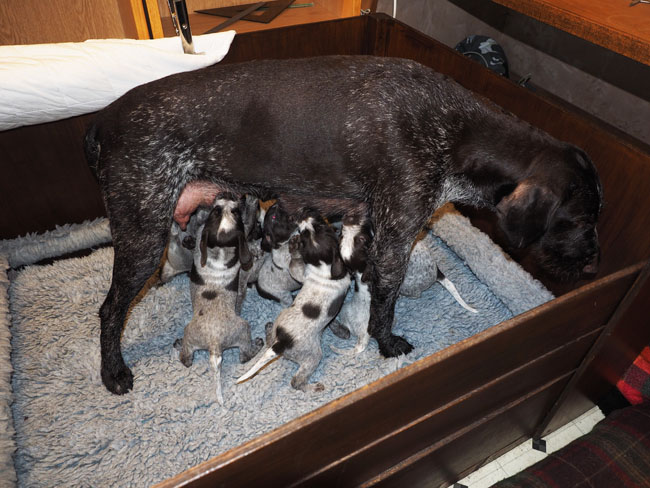 Gaia standing whilst feeding the pups.

They always remind me of commuters on the underground. 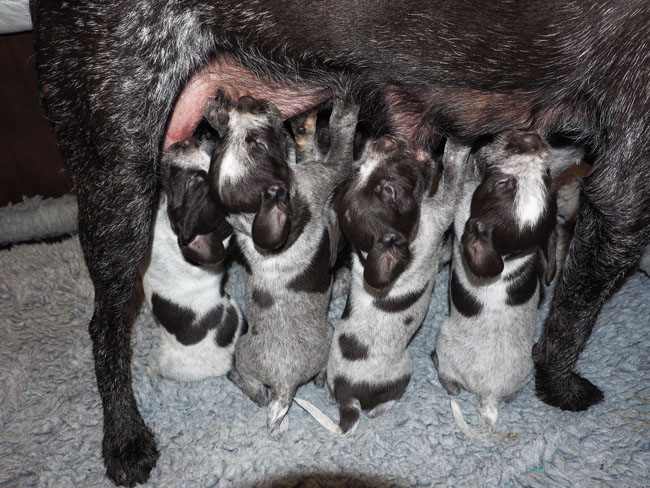 Lined up under the milk bar making the most of the moment. 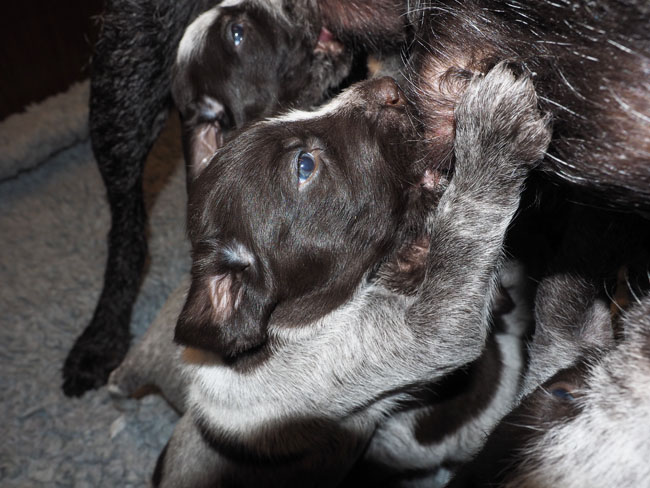 Concentrating on standing AND suckling.

Well, the time has come for FREEEEDOM. I took the front off the whelping box and allowed everyone to enter the newspaper garden. With some apprehension, they all eventually came out and it only took seconds for them to get on with the food. 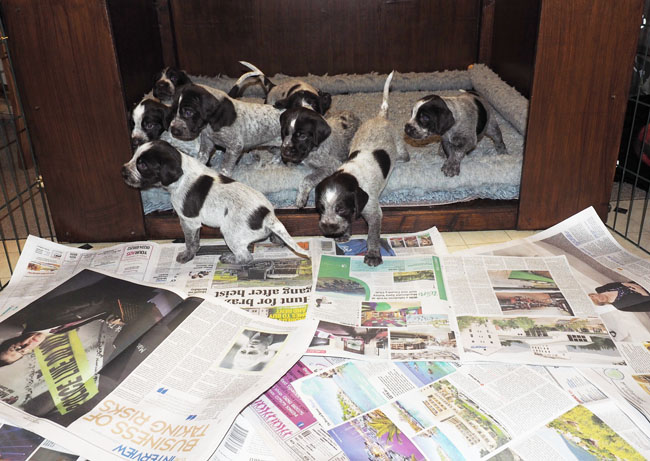 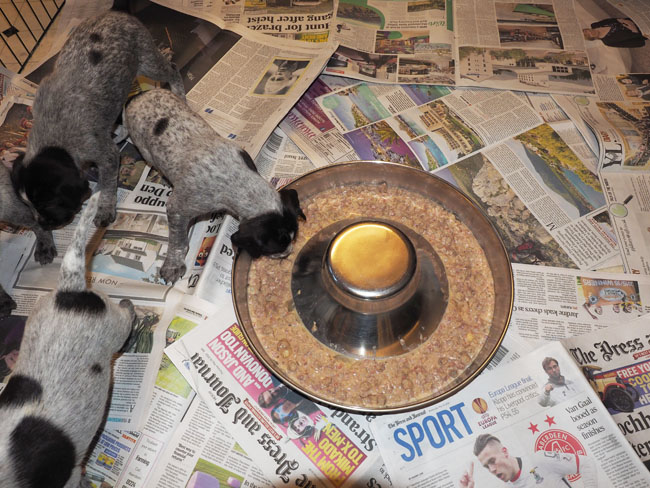 And Pontus gets stuck in to the food.

Gaia’s instincts are so perfectly timed to the process, it takes me by surprise. I had fed her in the garden and let her in a bit too early. She jumped straight in to the box and regurgitated the food. Being stinky tripe, it was not really what I wanted, but the pups loved it. I let them tear at it for a while and then cleaned up. 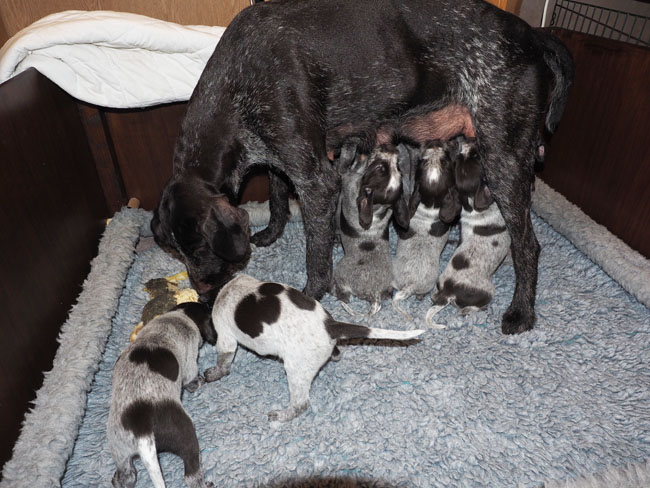 Gaia regurgitated her tripe for the pups.

She also brings them chicken if I give it to her. She is now feeding them less, so there is not so much need to give her food all the time and it is actually best when she is outside and away from the pups as they settle better. She spends the night in their room, but she sleeps safely outside their pen.

Despite giving the pups chicken legs, they prefer the milk bar. 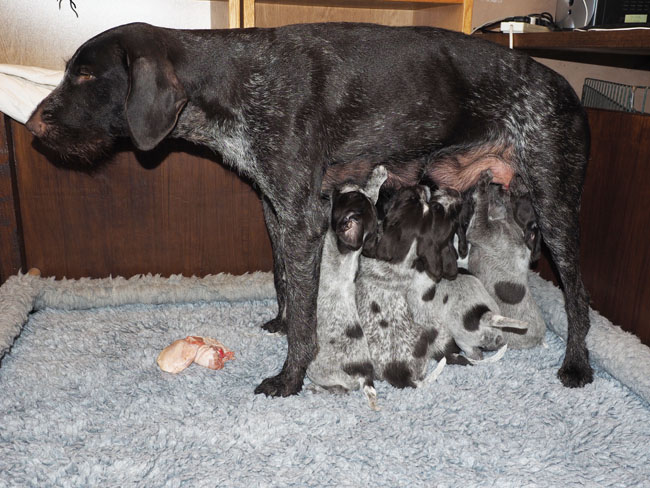 Gaia brught the pups some chicken, but they want milk.

However, the bone did get some attention by Titan: 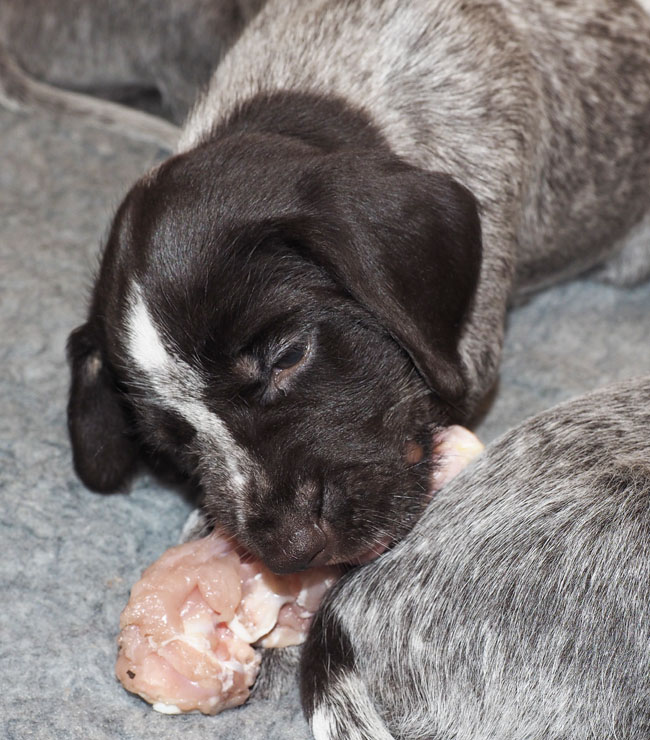 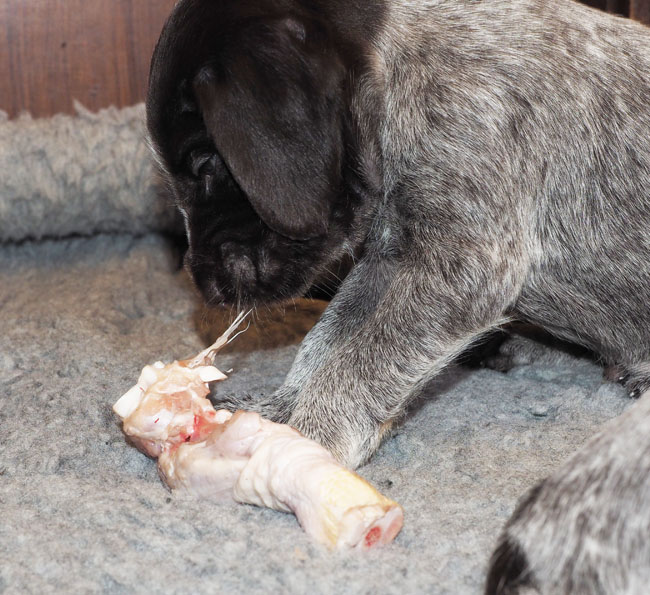 After all the commotion they gradually fall asleep. Selene must have been chewing on Atlas’ foot when she dosed off. 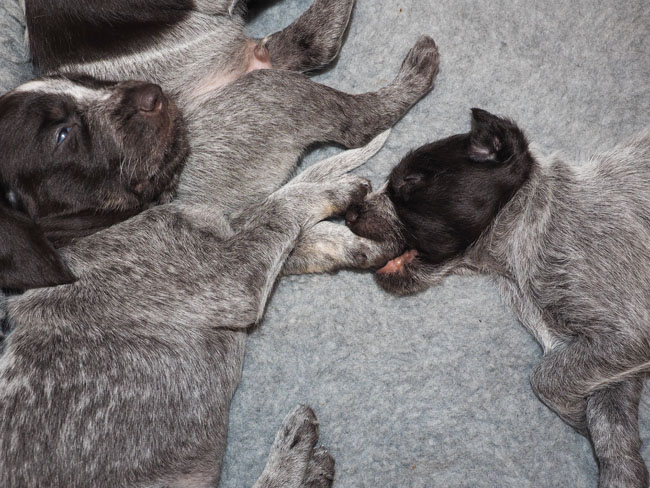 Selene fallen asleep with Altas’ foot in her mouth. 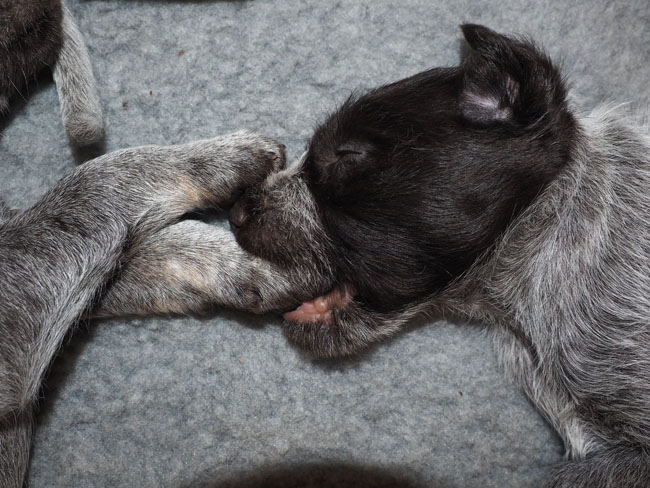