There is a huge amount of emotional debate going on about grouse moors at the moment. 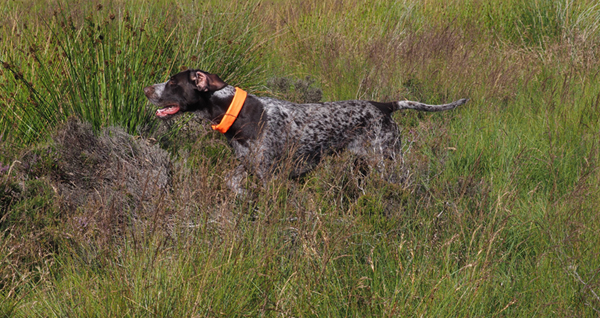 Pontus on point on grouse.

While I can understand that shooting does not sit well with some people, it is hugely dangerous when emotions take over at the cost of ecological and economical facts. If you do not put costly work into grouse moor management, such as muirburing and predator control, you will end up with a rank heather monoculture supporting a very limited variety of flora and fauna. But if you burn the heather at the 7-10 year intervals and keep on top of predators, you provide habitats for lapwings, curlews, oystercatchers, snipe, pipits, black game, birds of prey, hares and many others as a consequence of looking after the red grouse population.

Grouse moors, producing grouse for shooting and human consumption, are very expensive to run. Nobody buys a grouse moor to make money, they are bought and maintained by wealthy individuals because they enjoy the traditional hunting of game. A Scottish grouse moor estate of 20,000 acres will cost the owner somewhere between £250,000 and £400,000 to run each year. Money invested in our country. Very often grouse shooting is done mainly by the owner, but even if you tried to extract an income from the grouse and deer by selling the shooting days and the game, you would almost certainly not even cover your costs. You may have the odd bumper year, where you make a profit, but most years you would not and you would mostly make losses. Without these individuals spending money on the management and upkeep of the estates, they would deteriorate in terms of the ecology and healthy habitats and with that goes the waders along with many other iconic species, the buildings, the infrastructure and all the jobs. Scotland, as an economy, can not support itself, but we have this unique thing, the Scottish grouse/deer estate, which attracts investment from both UK and abroad. Scotland needs all it can get and this should be celebrated, supported and encouraged. Without the investment we would lose precious habitats and especially, our threatened  waters.

Seeing and Understanding the Grouse Moors.

I spend many days on the moors with my pointers and I am hugely grateful that there are so many people, lucky enough to have the financial means and enthusiasm to pour money in to the Scottish grouse moors. Since my childhood in Denmark I have had an interest in biology and ecology, especially born out of an interest in moorland. I have a MsC in plant biology and when I walk the Scottish moors I see and understand how the ecology works. Spending 10 hours a day, walking the hills, speaking with the ‘keepers is hugely informative.

As with everything in life, knowledge is the key. To run a grouse moor, the game keepers are spending their lives on the hill watching what is going on, keeping on top of predators that threaten ground nesting birds. Twice a year, however, it is important to take stock of what exactly is happening in terms of the target species, the red grouse. In the spring we count a representative piece of ground, which is the same each year for optimum comparison. You can also walk the moor in a line of 6-8 dog handlers with Spaniels or Labradors, but you still don’t get quite the same coverage as you do with pointing dogs.

Pontus on point. The bird is sitting up on the left hand side.

Pointers, Setters or HPRs quarter the ground and when they go on point, they will hold the birds in the one place until you get to them. On command they flush the birds out of the heather and as they fly off, you get a chance to count how many there were at that particular place. In the spring, when the grouse have paired up for breeding and sit in their chosen territories, we walk across and count the number of potential breeding pairs and in July/early August we do the same count to find out how well the pairs have bred and what age the young birds are. Sometimes weather can spoil the breeding and the pair loses all its chicks. They will often be able to start again and hatch a new clutch of chicks, but these will be quite small in July/August. This is important to know because you do not want to disturb coveys with young birds by hunting them in August. Based on the breeding success and chick age found in the brood count, the ‘keepers can decide how much shooting, and when, in order to manage the overall population to its optimum.

On a brood count it is best to get the birds out of the heather by rumaging with a stick to be as gentle as possible.

Three Days on a Scottish Moor in Angus Glens.

Every year I take my pointers out to help with the grouse counting on several Scottish estates. With my experience and knowledge of the moorland ecology I enjoy seeing the same places year on year and follow the health of the moorland. I see some moors, where they can’t afford the management as well as they did before and as a consequence the numbers of red grouse, mountain hare, black grouse and waders go down. Equally, of course, with a good management all these species increase in numbers.

This year I was invited to count on an estate in the Angus Glens. I didn’t know what to expect, but it turned out to be a fantastic experience, seeing the rich flora and fauna. The estate employs 6 full time ‘keepers, who all work extremely hard. There is also full time office staff and people employed in other areas of the estate with cleaning and maintenance.

Walking across the moor, keeping an eye on my dogs, I heard a curlew and asked the ‘keeper how they got on this year. With a broad grin and with light in his eyes, he explained where each curlew nest was in the spring and how many chicks got on the wings. He had, in particular, followed one nest with eggs through hatching to the family flying. I asked about the lapwings and snipe. With the same pride he told me how well they had done in the wet area that was part of his responsibility. This beat had a substantial wetland area, so he had a great number of breeding waders. These guys will sit out at 3am waiting for a fox that is there to find the ground nests. Without the ‘keepers keeping the fox population down, protecting the grouse and waders, these iconic species would struggle to carry on breeding. The waders also used to breed in farmland areas, but that habitat has shrunk dramatically. Without the habitat and without the predator control, the waders have very little chance of survival. Where we live, in Aberdeenshire, we overlook a nice field that has a wet area, a stream and a few trees. When we moved in, 25 years ago, the lapwing, oyster catchers and snipe were breeding in that field. Over the years, our area has become polluted with badgers and we have no more ground nesting birds despite the wet habitat still being there. It is such a sad loss.

Back to the moor: On a different beat we approached with a great view of the entire hill side. The patches created by muirburning were striking in colour patterns and when you think about what grows in these patches, it all makes total sense. Some patches are still full of black heather-stems from this year’s burning. Already this summer tiny sprigs of new heather and blaeberry/cowberry plants are appearing at the bottom. Then there are the areas that look grey/silver from a distance and these areas are the ones burnt 1-2 years ago. The old, rank heather stems have gone white and on inspection there are now good brushes of heather shoots and the berries are producing flowers for the bees and subsequently berries for the birds and small mammals.

At year 2-3 stage after muir burning the blaeberries start to succeed.

Cowberries are the same. Very valuable to the fauna.

Across the hillside there is a pattern of green and purple in different shades. During the rotation of burning, each patch supports different plant species that, in turn, support different species of insects and hence different species of birds and mammals. At the end of July the purple patterns are particularly striking as there are patches of burning that are dark, deep purple in colour as they are covered by Bell Heather. Others contrast with a delicate, pale purple as this is a Ling Heather “stage” with the Ling Heather dominating and just about to blossom. As you walk across these patterns, you see close up, how the habitats vary and support many different species.

My dog had a point at a little wet patch, literally at the top of the mountain and it turned out to be a snipe. I noticed it was a little reluctant to lift and fly, so I investigated and sure enough, here was a little fluffy chick. It has to be one of the most beautiful creatures on earth. I waved over the ’keeper, who broke in to the happiest grin. We took this photo. There would, no doubt, be more chicks, but we just left the area without causing any further disturbance. 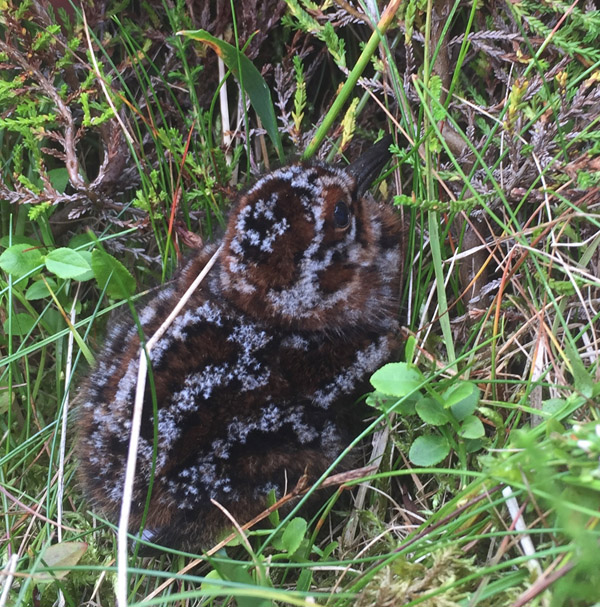 In the three days I walked these hills and lived in the little cottage in the middle of the hills, I never saw one crow. The crow population is difficult to keep down, but the workers here have succeeded very well and chicks of all sorts of species survive.

Even on the outside wall of the cottage I stayed in, a little flycatcher (we think) had built its nest in the stonewall, almost ridiculously obvious to any perching crow if there had been one. At home, where we live, this nest would have been found and the eggs and nest would have been raked out and eaten. Just this one little nest proved to me how important crow reduction is on its own.

Spot the little nest in the wall…..

Flycatcher (we think) mum peeking out.

Instead of channelling ones envy of people with financial means in to a war against shooting, it would perhaps be better to understand the good that is done on Scottish estates. Personally I live a very simple life and I am hugely grateful that money is pumped in to Scottish grouse estates helping the rich flora and fauna along with the provision of jobs. Who else would pay for this expensive management? If the moors are left without management, they will turn in to vast areas of rank heather, supporting almost no bird life.