The Need for Good Dog Beds When You Travel in Winter.

Last week I had two days of mixed hunting out west. I travelled with my two pointers in the back of the truck on a huge, bespoke size Tuffies dog bed. No chill from the floor at all. This is very important when staying away over night as the dogs have to sleep in the truck. With their ‘pyjamas’ on and with a belly full of food and on the thick, insulating mattress, they are cosy and happy.

As it is so important these days to explain and justify everything, I will start with that to explain our hunting of woodcock. Woodcock do breed in UK, but every year UK has an influx of migrating woodcock that breed in Scandinavia, the Baltics and Russia. They are actually found all over the countryside at this time of year and it is estimated that we receive between 800,000 and 1.3million visiting birds every winter. The encouraging and conservation thing is that if you like to hunt them, you only have very limited places where you have opportunities to shoot while the birds will be living everywhere. They sit under a bush in people’s gardens, at the edge of fields and roads, in thick forest and up in the hills in the bracken or by a tree trunk. Last year I was going hunting and stayed in a hotel, so I walked the dogs in the morning and put woodcock up in the hotel garden, along the road and in the little park, where I took the dogs. Some years there are not very many, while other years they seem to be everywhere. This presumably depends on the conditions in their native countries and it also depends on the frost conditions here in their winter-host country. Woodcock feed on worms in soft cow pads and mud. They stick their long beaks into the soft ground and miraculously snaffle away to get the worms. They feed during the night and it is amazing how you can see them travel at dusk if you are outside, especially if you stand near a thick wood where they fly out from.

The following morning you can see where their beaks have been probing:

Muddy area with holes where woodcock have probed with their beaks.

When woodcock come flying over the sea from Scandinavia and beyond, they land exhausted along the coast line on the east side of the UK. It is called “a fall of woodcock”. Apparently the beach can be crawling with the little birds as they land. People on oil rigs also see them land there for a bit of a rest. What a fascinating bird. They will, as all tough migrating birds, lose weight on that big journey and they will be thin till they get a good few days of feeding. There is a code of conduct that dictates that you do not shoot woodcock if you find that they are too thin. A good code is to stop shooting four days after a frost has set in and to leave the birds for 7 days after the frost has lifted again to make sure they can feed and fly well. I once spoke to a chap, who described how they had shot a whole bunch of them in a short space of time and never missed one. I was feeling sick hearing it. There is very little doubt that those birds were tired and thin. They are difficult to shoot and only if they are tired will you get a huge result like that. On a normal day, shooting over pointers, you will perhaps shoot ¼ of what you see. The rest just fly off.

There are further codes of conduct recommended by The Game and Wildlife Conservancy Trust: in order to protect our indigenous, breeding population one must familiarise oneself with the local situation and try not to shoot any woodcock in areas where you know they breed. A rule of thumb is to leave the birds entirely till after 1st December as that is when the biggest influx of migrating birds has arrived.

Nowadays most driven shoots also make a strict prohibition on shooting driven woodcock. It is far too un-sporty and easy to shoot woodcock coming out over the trees. Many shoots will ‘fine’ a guest £100 for shooting a woodcock. The fine is a cheque written out to The Game and Wildlife Conservation Trust.

Having said all the above, woodcock hunting over pointing dogs is great and sustainable. So that’s what I do.

Off I go, usually with a friend, in the truck with my dogs in the back to areas where woodcock tend to stop while they are spending the winter in Scotland.

This year we had one incredibly wet day, but with the right gear, it doesn’t matter.

Wet weather all day. But all ok with a good jacket, trousers and boots.

I took my stable Gaia, who rarely misses a bird and I took young Pontus. He is still not great and he still ‘creeps’, ie he doesn’t hold the points well. He will point, but keeps trying to take just one more step…….

Once he stops on point, I rush up to him to be there to steady him. He knows I don’t want him to creep, so if I am beside him, I can keep him steady. We did manage to shoot 3 birds over his point, so it was ok.

It was two mixed day’s shooting and we found the odd pheasant too.

This kind of hunting is proper sport in my opinion. You work hard for your result and it is a day out in all weathers.

Once finished, it is also a great feeling to feed the tired hounds and put them back on their waterproof dog bed in the car.

All the birds that we shoot come home with us and are carefully prepared for use in the kitchen before freezing for later. The whole winter is in fact used to store up wild food for the rest of the year. At the moment I have roe deer, red deer, grouse, pheasant, duck, partridge, geese and a snipe in the freezer. Cooked with local root vegetables and kale from the garden makes an amazing meal.

And after two days on the hill, the dogs sink in to their warm Tuffies Nest dog beds when we get home. 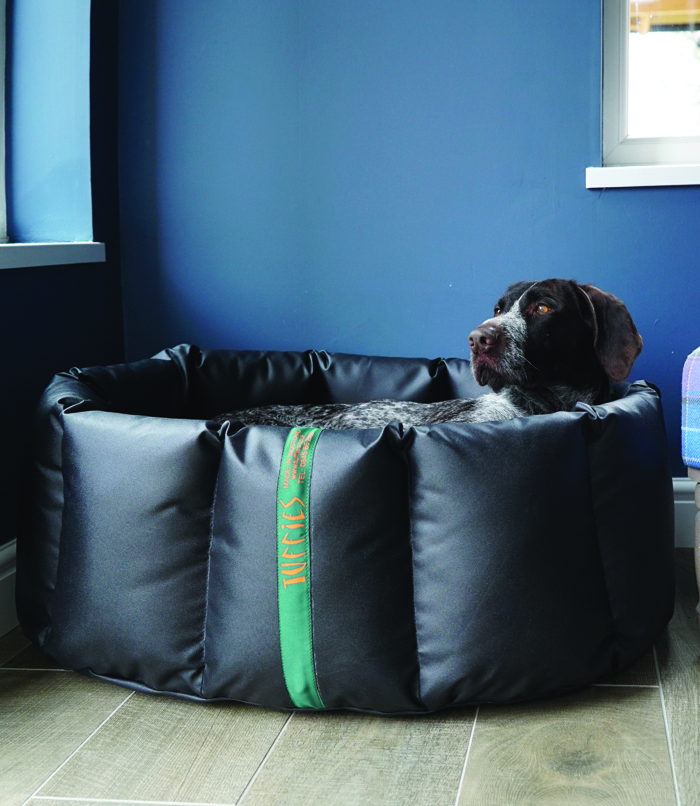