Dog beds in chapels and other places

Here at Tuffies we receive many varied requests. With some orders we know where the dog beds are going and what dog it is going to be used for, but most of the time we wouldn’t know. Then LATER on we sometimes realise where the bed was put to use. For example we had a request for a further order from a pet-funeral company. They wanted us to make a little extra sheet to go over the Tuffie bed, which could be changed quickly. So we did and we were very pleased to be sent a lovely picture from the company once the beds were in situ. 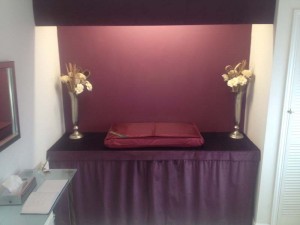 Tuffie beds at the chapel at Resting Pets. The perfect send-off for your loved pets.

Where do we put our dead doggy friends? I would always have mine put in the garden. That’s where they have enjoyed life and they should be allowed to stay at home. In fact I would put my husband there too if it was legal. As he has an old JCB digger, he would definitely like to dig a hole for me, have some mates (also my mates) round and do the whole thing at home.

When our little cross breed died some years ago and the children were small, we put her in the hole in a little blanket on one of her many dog beds and I remember my son, who had played tennis against the wall for years, using the dog to fetch the ball every time it dropped, put a couple of tennis balls in the hole with her. It was a sight back then when she was alive: she would get the ball and bring it to him so he could carry on. After some time, the ball would come back increasingly covered in slobber to the extent that he taught her not to deliver it to hand, but to put it on the racket that he held out for her. That way he wouldn’t have to touch it. There were slobber marks on the wall, though….

Another use that we were left to GUESS because the purchasers would not tell us was all the black Tuffie beds that we send to an institution in Hereford. Yeah, well, who is it in Herefordshire that always use black for everything…? And they are very secretive…..

And we have supplied dog beds for hotels, ferries, racing kennels, for cats, for a duck…., for veterinary hospitals, canal boats…… the list goes on.

Someone also told me that he had bought some dog beds from us and they were great for padding the boat-masts when he was transporting boats. I am sure the skippers dog also sits on them as they are on the water.