Call our team 01888 563288
Handmade in scotland for active dogs
Free delivery on all orders for mainland UK
Posted on October 13, 2015
Share this

Dogs love the beach. What is there NOT to like about a sandy beach with a nice sea lapping in at the shore? Tippex loves to be taken in the car to the beach with my son or daughter in Aberdeen. As Fergus is heavily in to tennis, he always takes a racket and a ball along.

The other day Tove took Tippex in her car, but forgot to have dog beds in the car, so the back of it was already hairy by the time she reached her destination, but she wasn’t too worried.

On the beach it is all about whacking that tennis ball a long way out and let Tippex retrieve it.See the ball where I put the arrow. 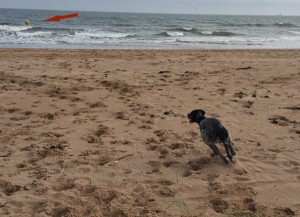 Tippexs runs out for the ball by the sea. 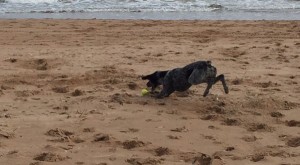 She grabs the ball in the sand.

She is now 10 years old and I haven’t used her much this year for the grouse, not because I didn’t want to, but the two younger dogs did the work no problem and having three dogs out is usually too much, it ends in chaos. I have often been on the grouse moor and brought her for back up, but she has to spend most of her day in the car, which she does not approve of. She has beautiful waterproof dog beds in the car, but by the time we return from the hunting, she has been digging them up and tumbled them round and round. Poor soul. 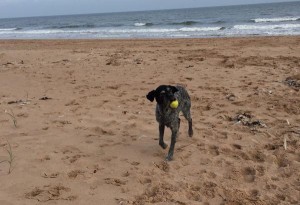 Tippex returns with the ball, exhausted.

So a good run on the beach in the city is just heaven for her. She is off as fast as she can go, scoops it (and a load of sand) up and hurls back with it.

I am not entirely sure how many times she can do this, but if it is not too hot, it is many, many times. The German Wirehaired Pointers have fantastic stamina, but they are not good if it is hot. Tippex is a resourceful madam, who will always find a muddy puddle to lie down in to cool off, but on the beach, it’s easy to just jump in the sea.

When she thinks that she has done enough running, she lies down and hogs the ball to make sure it does not get  pinged off again. 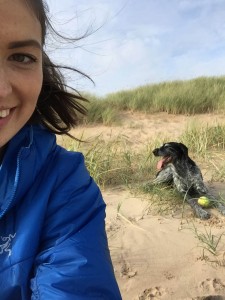 Finally Tippex needs to lie down and rest.

Tove said that Tippex would sometimes lie ON the ball to hide it (or have a paw on top of it) while she caught her breath. Making herself sandy dog beds in the beach is great for getting that sand right in to the coat.

Obviously, on the way home in the car, if you don’t have good, nest dog beds with sides on, she sand and salty water will be shaken everywhere.

Dogs love balls. Here is Christine’s Max’s with three he collected to play with. 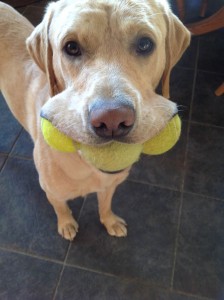 Max can pick up three balls