Here is how two Chihuahuas at my local barbers changed my opinion of small dogs. I interviewed the owner, Colin, and discussed their contrasting hair styles, home life and the difference bringing your dog to work can make if done right.

The Perfect Doorman
Until a few years ago getting my hair cut was more of a nuisance than anything else. The aim was to get in and out as quickly as possible without having to wait behind two or three others for my turn. I had recently moved to a new area and tried a place up the road that was on route to my job, there was a small queue which would usually be enough to put me off and try again another day. I stayed this time though because I noticed a dog by the entrance. A chihuahua, who I later learned was named Mr T, was diligently tending to the queue, hoping someone would pick him up and put him on their lap. I took a seat and he politely greeted me with both paws whilst his owner and barber boss, Colin, gave me an estimated time for my hair cut. 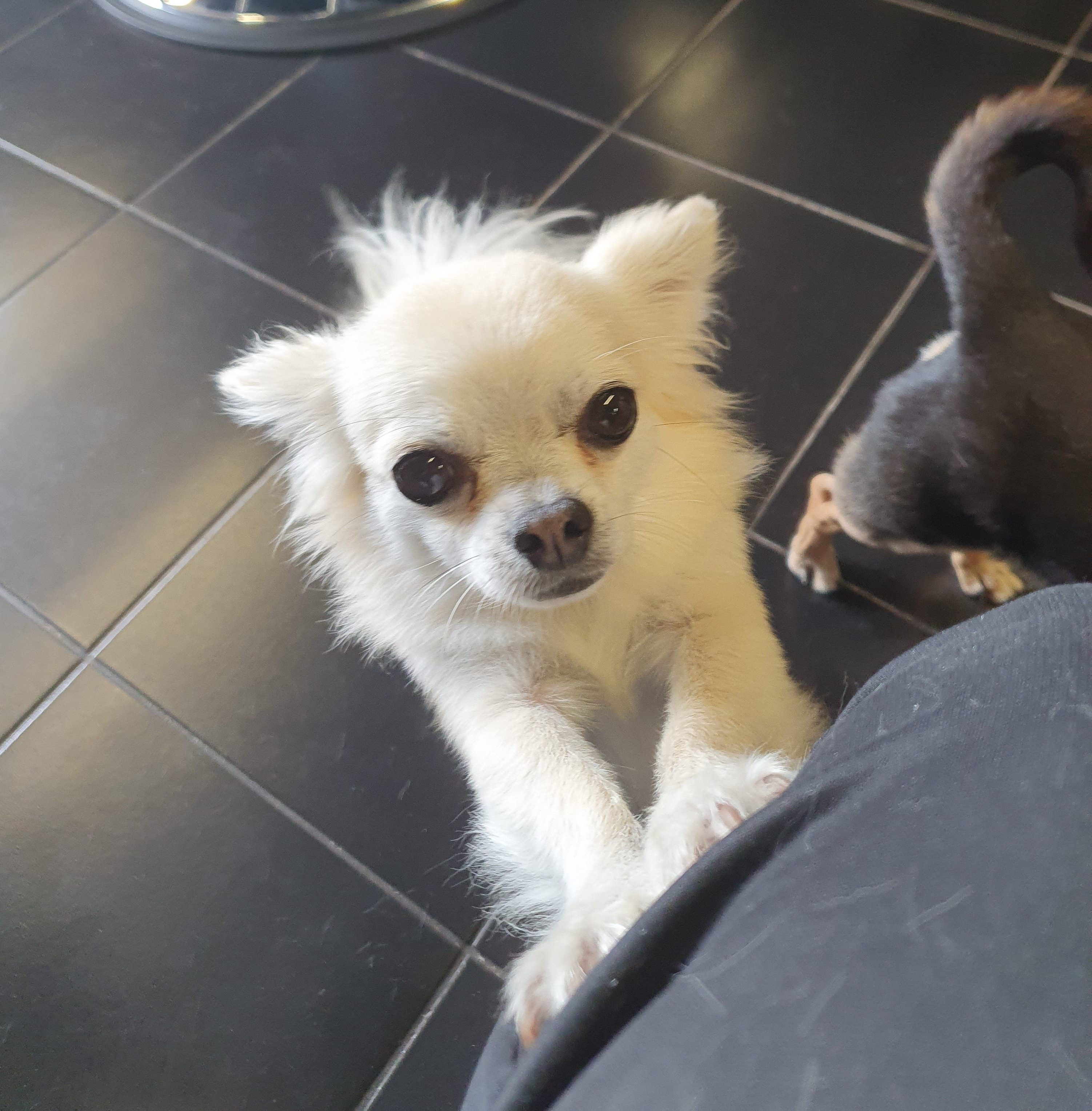 The Small Dog Stereotype
Before that I probably had a preference for big dogs over little ones. I had only really seen chihuahua’s in celebrities bags and to be honest thought of them more like cats than dogs! This guy changed that stereotype in my head pretty quickly as he sat and waited patiently, without barking, for my attention. I had thought of large and small dogs being completely different in temperament but he reminded me of a working Hungarian Viszla we had as a family pet when I was younger; desperate for affection, well mannered and definitely not stupid. I checked with Colin if it was okay to pick him up and got the go ahead to lift him on to my lap. As far as Mr T was concerned – mission accomplished. 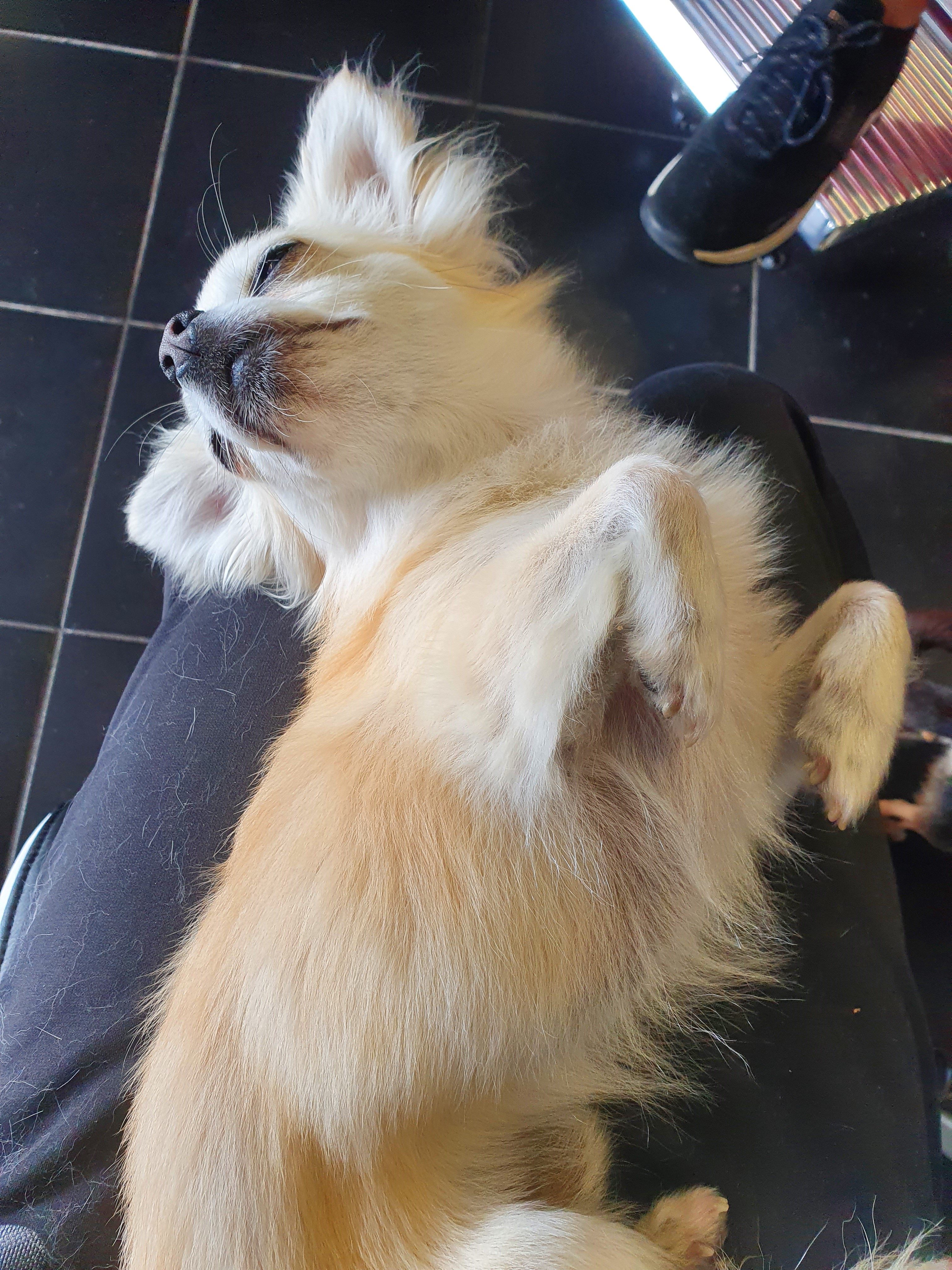 Hair Control
I probably left that day hairier than I went in! Mr T is medium/long haired which can be a problem when it gets a bit warmer and the shedding starts. Having said that he is lucky to have Colin as an owner who is already in the business of hair cutting to keep it under control. Lots of dog owners don’t have that luxury though and the hair can make beds and carpets smell more quickly so a good idea is keep them in rooms without carpets all together or try a dog bed with a smoother wipe clean surface that doesn’t trap hairs. A couple of years later Colin had gone to the other end of the scale with his next dog, Elton, a hairless Chinese Crested cross Chihuahua. This guy was at work with Colin from pretty much day one and had clearly been on Mr T’s customer service apprenticeship scheme because his greeting was identical. 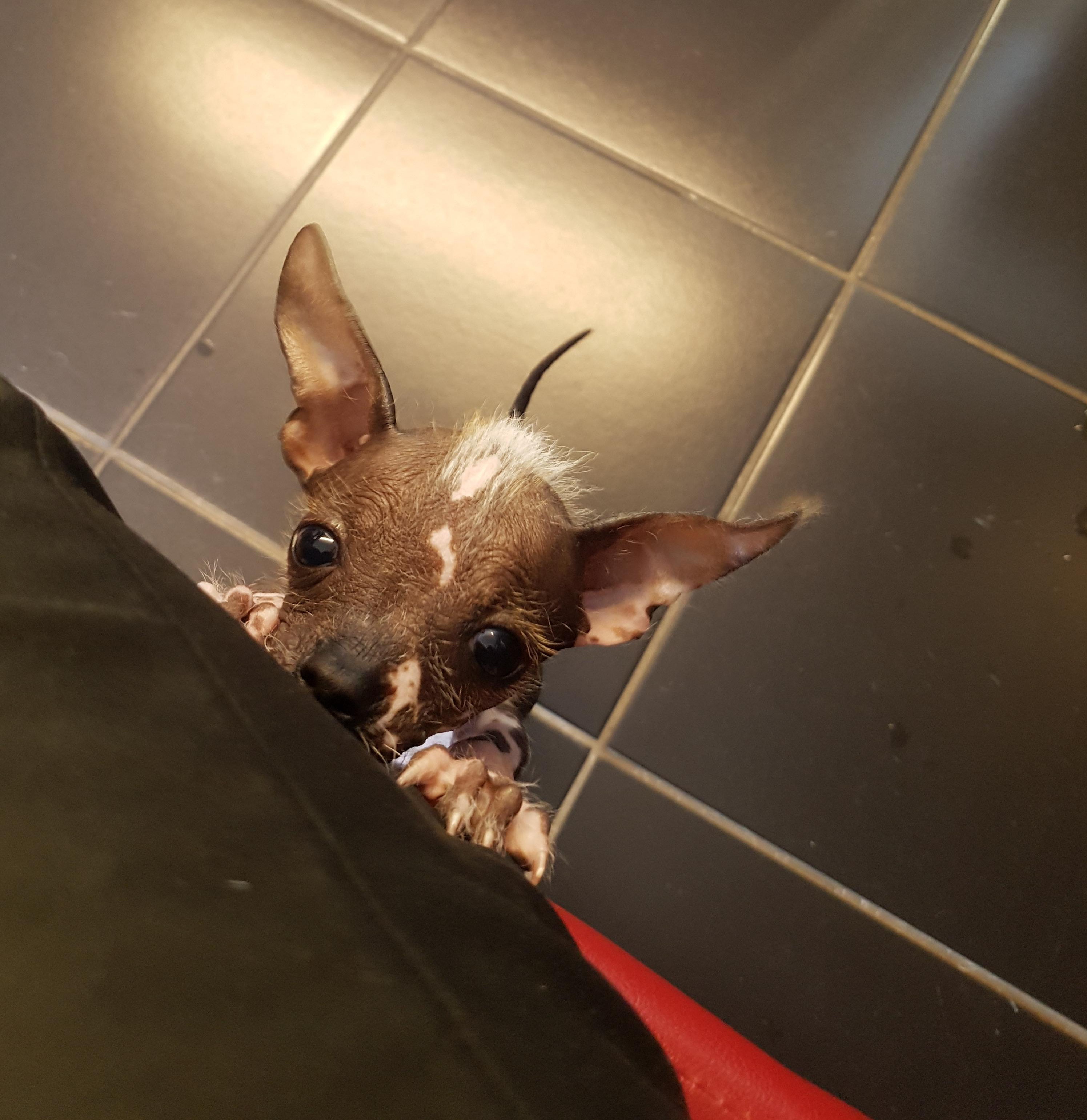 Keeping Warm
At first glance he looks a bit like the creatures from the 1984 horror film ‘Gremlins’, extremely cute but you’re not sure whether to let him get wet or feed him after midnight. Here’s a reference if you haven’t seen the film. His excellent mohawk makes him the perfect barbers poster boy. There are obviously different considerations you need to make when you have a hairless or very short haired dog, mainly to do with keeping warm. Colin said Elton gets special permission to sleep in his bed where he keeps extra warm under the duvet and he always makes sure he has his jumper on during the day unless they’re in a particularly warm environment. Dogs like this love to burrow so be sure give them plenty of blankets or even a tunnel mattress dog bed cover to keep them covered. Here he is in his favourite jumper. 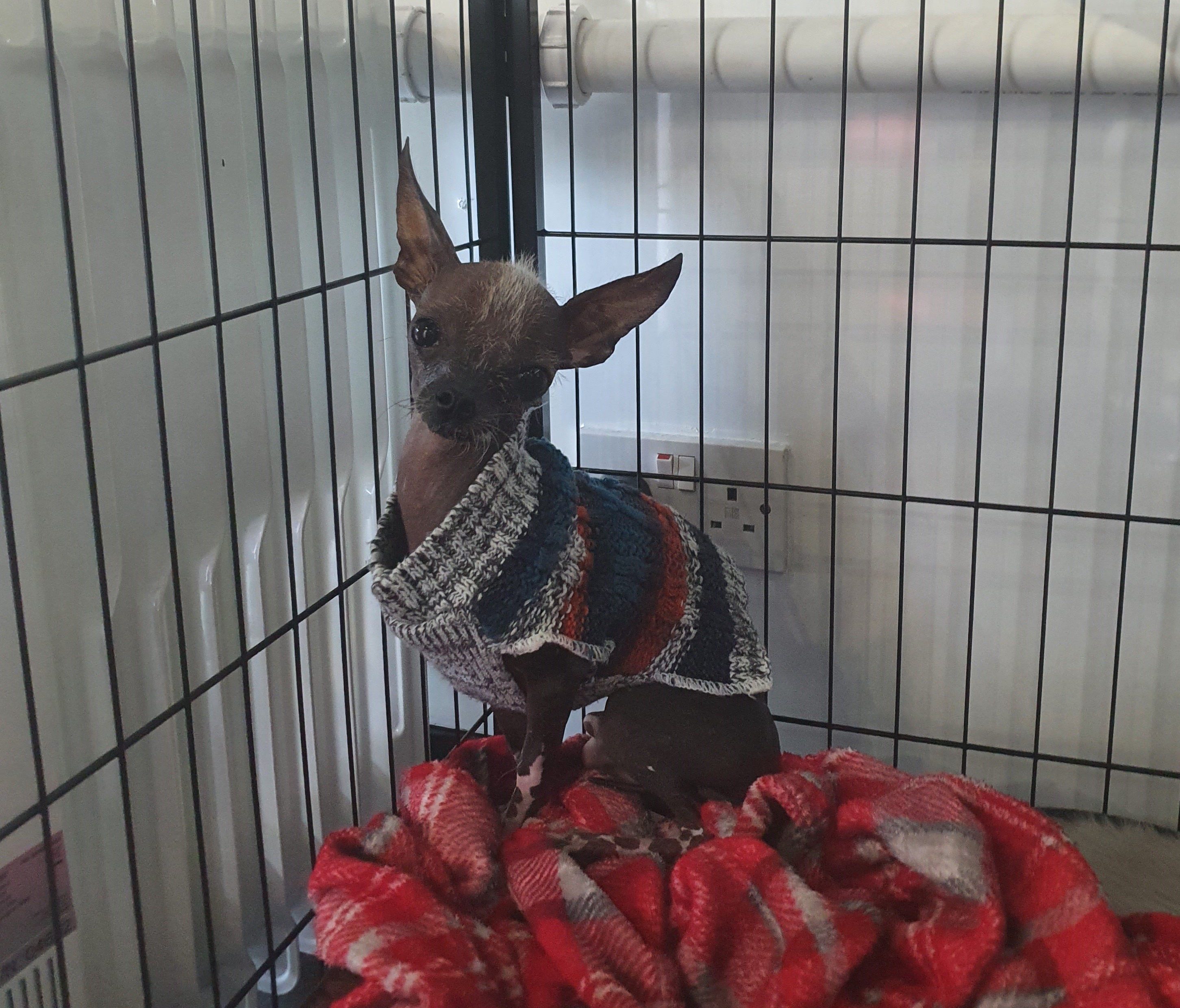 Home Life
Mr T and Elton are not Colins only dogs. Back home there are 6 more, most of them Chihuahuas! Colin joked that the neighbours ‘must think he’s crazy’ when they see him and his partner, Dean, walking all eight of them at once in the evenings. They take three each on a lead and have one each in a baby sling strapped to their fronts. Dean described the responsibility that comes along with owning eight dogs, the space required and the visits throughout the day to keep them happy. We’ve all heard the horror stories of some nine to five workers who don’t fully understand the requirements of their dog to be occupied. No matter how small, they are pack animals at heart and can’t be expected to be left alone like you might be able to leave other pets. At about 11am Morag arrives to check Colin’s dogs while she gets on with the cleaning and then around 3pm Deans mum will drop in. If you haven’t got the luxury of these options (and especially if you have only one dog) then it’s better to have an outside area for him or her while you’re away to expend some energy. Make sure they have a cosy kennel to use for those rainy days and a waterproof dog bed that doesn’t soak through and get cold. There are lots of dog jackets on the market to choose from if they haven’t got a thick coat and any wet belly’s will quickly dry up in their own body heat on a waterproof surface. 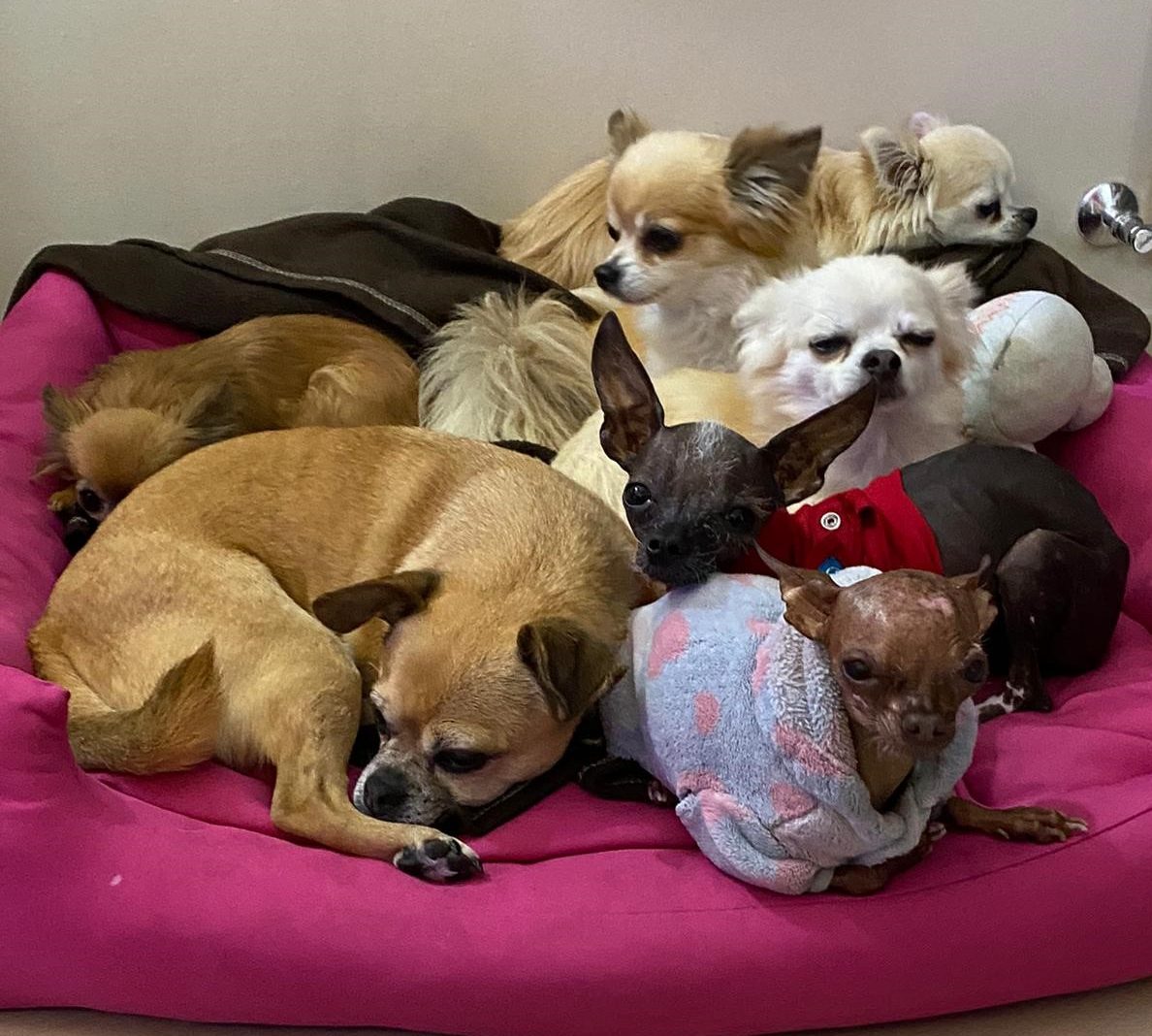 Colin said he has always liked Chihuahuas because “they are like big dogs in small dog’s bodies”. Dean was throwing around the idea of getting a mini pig as well but they aren’t sure how well it would integrate into the group! Having owned so many for so long their advice to anyone thinking of getting a Chihuahua was to get two because they get lonely by themselves and are better together.

Business or Pleasure?
I’m not sure whether I would have waited in the queue the first time I visited ‘The Barbers Stop’ had Mr T not been there so it definitely helped Colins business in my case. That’s not the reason they come with him to work though. He told me they are like his children and he couldn’t imagine not bringing them along. Dogs are a lot of work compared to most pets but the companionship they bring to people’s lives is immeasurable and Mr T and Elton are a great example of that. So if you’re ever near Altens in Aberdeen with a overdue hair cut, make sure you visit the Barbers Stop and go when there’s a queue for the best experience! 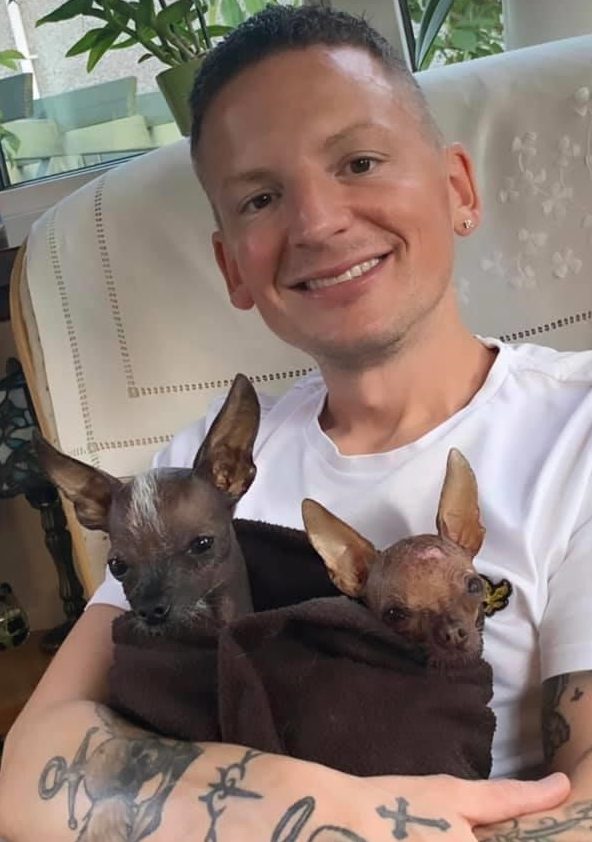 P.S. Here’s your small dog’s next Christmas present, you can thank me later!