This month we pay tribute to the clean-up groups and dog walkers that are sick of seeing our countryside and streets plastered with crisp packets, cans, and bottles. If the route you walk your dog could do with a tidy then use the following as inspiration and if you’re already litter picking then consider taking some photos and spreading awareness to encourage others to do the same. I’ll also outline how to train your dog to stop sniffing at and picking up every piece of rubbish they come across which can be annoying and sometimes dangerous. 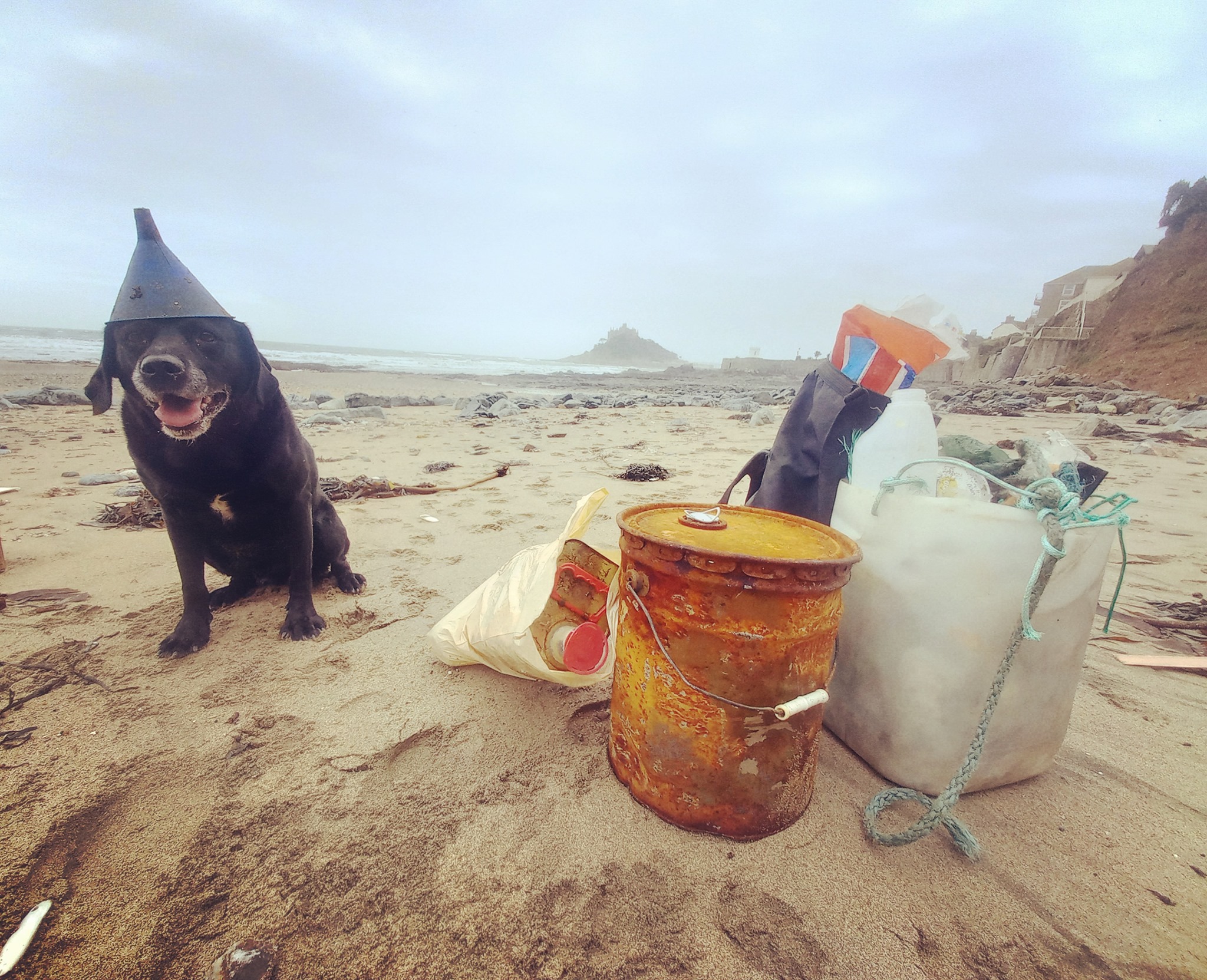 Recently I came across a page on Facebook called ‘Paws on Plastic’, it’s a group dedicated to spreading the word on picking up litter whilst walking your dog. It was set up by a lady called Marion Montgomery two years ago and has since amassed an impressive 19,000 followers from over 80 countries across its various social media platforms. Marion told me that they are a not-for-profit organisation so don’t have an advertising budget to help spread their message. Little by little they gained traction through Word of Mouth and brilliant photos like the one above.

Constance Morris, one of its members, took the photo during one of her regular beach cleans with her rescue dog, Monty. Constance started picking up rubbish about 8 years ago “It sounds stupid living in Cornwall surrounded by beaches but until we got Monty we just didn’t tend to go, so he reintroduced us to our coast. Rubbish was/is just everywhere, sometimes we can fill our buckets within a few feet of stepping onto the beach”. Constance has another, slightly more unusual companion though – her cat, Haku. 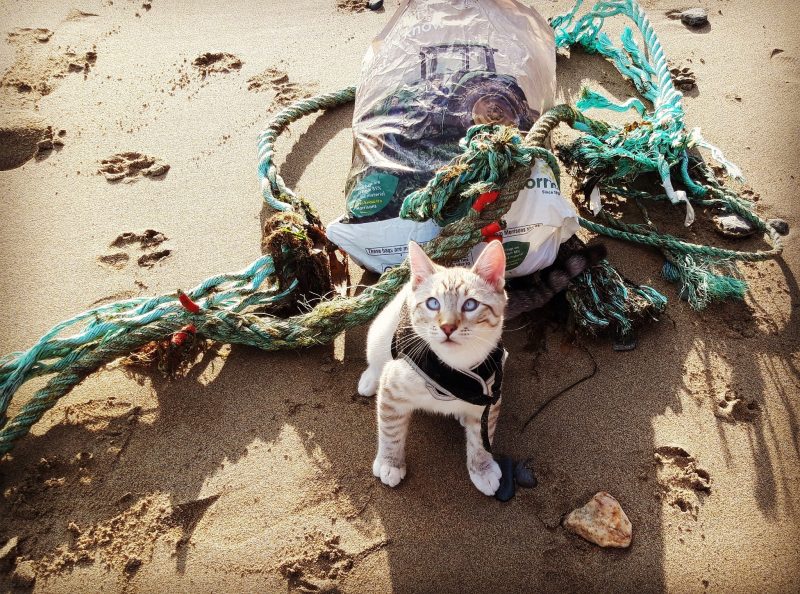 Haku the Cat Litter Picking on the Beach (Constance Morris)

Constance created her own plastic free ‘wildlife garden’ and managed to attract birds, newts, bats and hedgehogs. So when she got Haku she didn’t want to just let him roam free and hunt for fun – as cute as cats are they are brutal hunters and can decimate small animal populations. Her solution was for Haku to join in on the litter picking. He gets walked twice a day and is allowed out in the garden on a 10m rope and supervised. Obviously this is a fair commitment and not all cat owners are able to do the same as Constance, but you can help protect the birds by putting a bell on your cat and help out other species by building them safe retreats out of reach from predators. Cats are incredible climbers but there are still places you can put a birdhouse that they can’t get to, high up on the wall of your house for example.

Back to the litter picking, here are some of the troops in action. 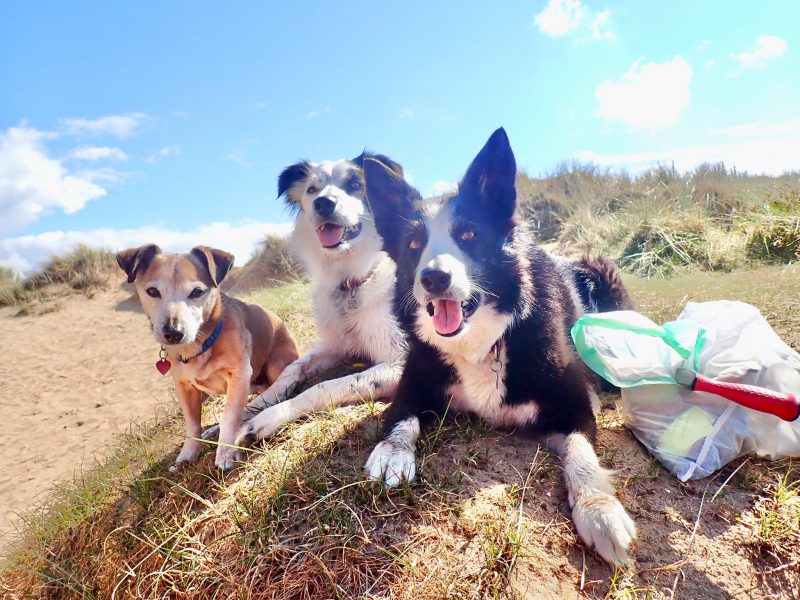 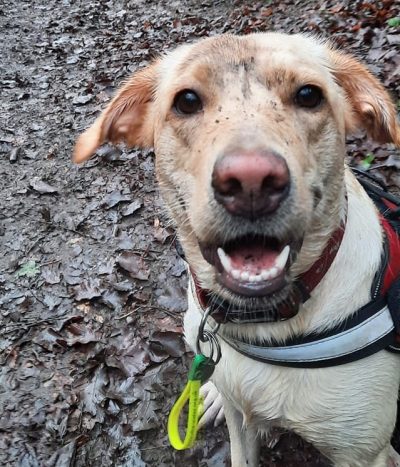 Yellow Lab After Finding a Fiver on his Walk (Keith Down) 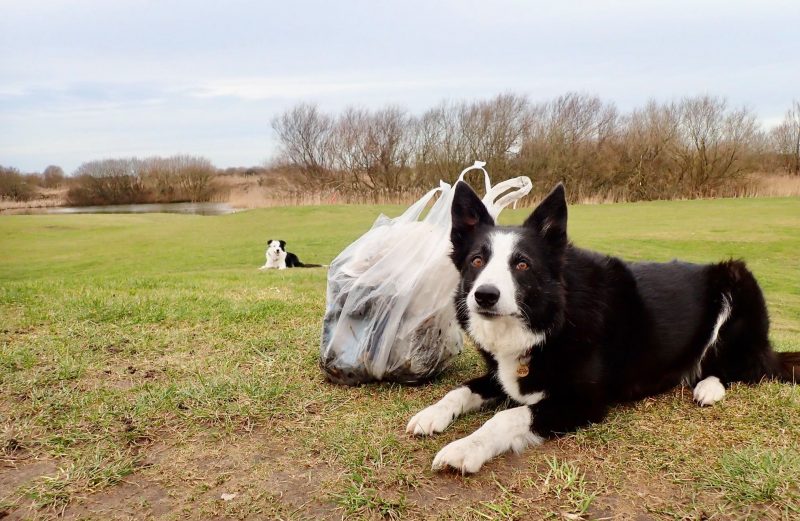 Proud Pair of Collies after Filling Another Bag (Claire Britten)

Paws on Plastic encourage dog walkers to bring a bag with them and pick up as they go, but there is a more direct approach to keeping the countryside clean… Tuffies founder, Luise, made this sign after continually having to clean up on her daily bike ride with her dogs.

Waste can be extremely harmful to animals and that includes your dog, so it is crucial that your pooch learns to leave rubbish alone on walks. In particular, look out for corn on the cobs (undigestable) or cooked chicken bones that can splinter and cause internal harm. If you find that your dog picks up anything and everything along their walk, here are a couple of tips to teach them to leave litter alone.

Firstly, try feeding them before your walk, a hungry pup is more likely to follow their nose to smelly litter.

As with any training, start easy and build it up. So start indoors with no distractions and a relatively boring item like an old toy. Offer a treat and your dog should drop the toy to eat the treat, if they prefer the toy then up the ante with a higher value treat or make the treat fun by throwing it along the ground. After a few successful attempts add the cue “leave it”, “drop it” or whatever you fancy. Then move on to using the cue before giving the reward. When they’ve got the hang of it move on to a more tempting item like an old sandwich wrapper and then eventually move the same exercises outside where there are more distractions. In every case be sure that your reward for “drop it” is much better than the item itself. Don’t lose hope if you have to move back a step, it’s much better to do so rather than persisting with failure and repeating yourself a hundred times if they don’t let go. Eventually, the goal is to get your dog to walk straight past pavement rubbish so try and spot potential temptations before they notice it and then reward them for looking at you whilst they walk past it.

This Summer has been hot and that’s coming from a human that can shed layers to cool off, unlike your pup. Particularly for dark-haired dogs, who absorb much more heat, the sun can make things uncomfortable very quickly. Try and keep an eye on the panting and general behaviour of your dog and give them time in the shade if they are looking lethargic. Also, keep an eye on their paws when walking on tarmac as it can heat up and cause burns. If you’ll be sitting down then give them something cool to lie on such as a thin mat or Twill Mattress Cover over their Durasoft Mattress Dog Bed.

Obviously be sure to offer your dog plenty of drinking water and consider visiting the beach or ponds/rivers on hot days that they can jump into to cool off. A soggy dog makes the cleanup job harder for the drive home but if you put a waterproof dog bed in the boot they will quickly dry off with minimal mess. A good option for the car boot is a Bespoke Sized Dog Bed that won’t slide around and you can just hose it off outside whenever it’s needed.

Thanks to all the cleanup volunteers for the brilliant photos and stories.