Tuffies have agreed to sponsor The Scottish Search and Rescue Dogs, SARDA, and I had the privilege of joining them for a day’s training yesterday. It was really interesting to see how they work. Their work save lives. 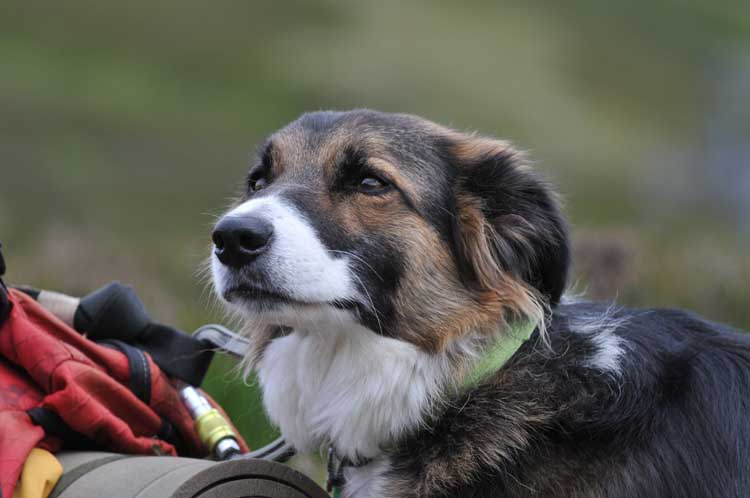 We met in the Glenshee Ski Centre’s carpark and everyone got ready to do their thing. Some had trained dogs that just needed to have a day’s refreshing training while others were coming up to their assessment, which will qualify them (or not) for being called out looking for missing people in the mountains. There was also a puppy group, where the young dogs were learning the very basics of Search and Rescue. 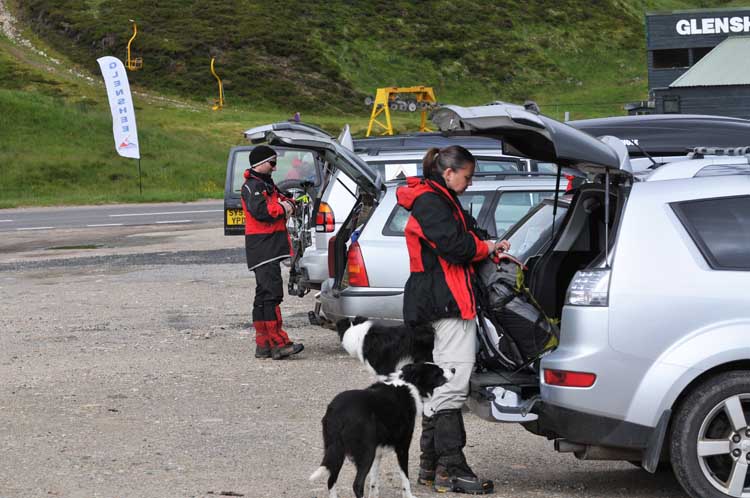 We had two “bodies” ready with sleeping bags, hats and snacks as they had to be found by the dogs. These grand volunteers started off by walking up into the mountain where they would lie down and just wait. The dog handler in question will not be told where exactly the casualty is, but only the area that needs to be searched. 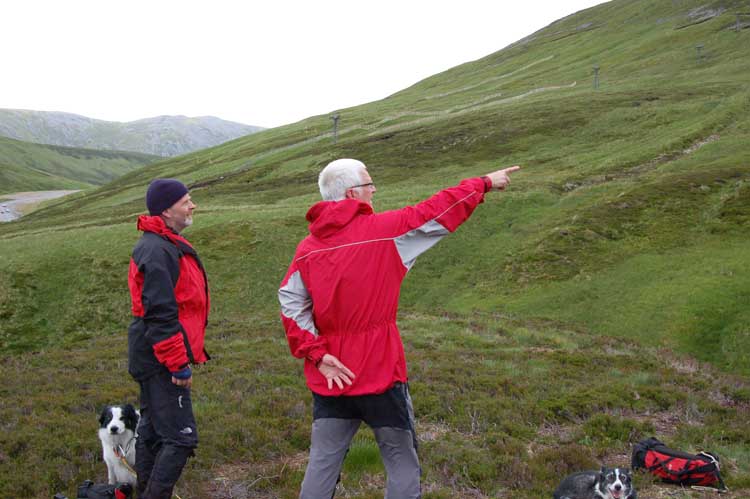 The dogs all have a harness with a bell, which they wear when working. The idea is, not only is a harness handy when the dogs are lifted into helicopters or down cliffs, but when the handler fits on the harness, the dog knows that it will now be working!!! 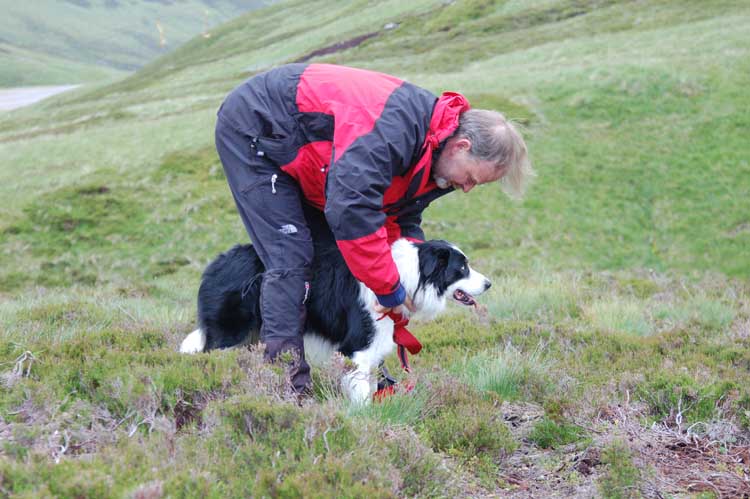 Then they are off. On a simple training day the dogs just need to be out for 20 minutes or so, as it is all about getting “the find”. On real searches they can sometimes be out for hours or days searching for missing persons. 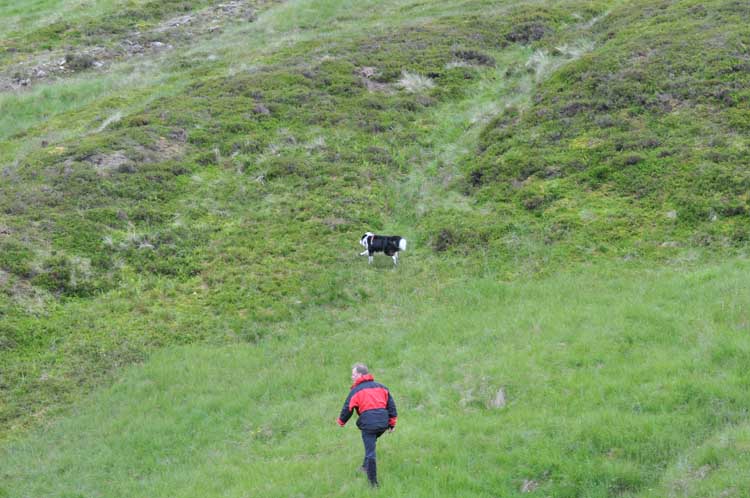 As you can see, the casualty has been found (and her nice sleep in the mountain air has been disturbed). The dog and handler radios the result into the base and we can pretend, and imagine in our minds, that the chopper has now been in to lift the casualty out. Dog and handler can come back. 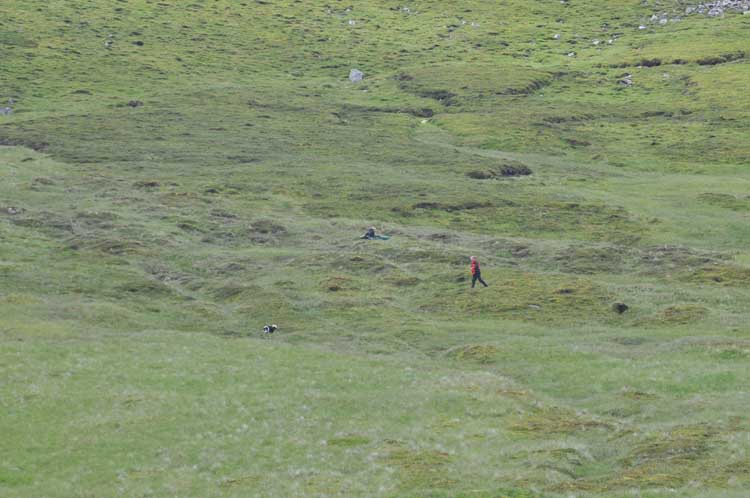 Here is another dog finding Mark. He seems to have got lost and has huddled in beside a snow fence……. the dog finds him and gets the handler over. The dog has no perception of this person being lost or injured, in fact it is a bit disheartening to see that once they find the casualty, they don’t greet them. They simply look for their handler because the whole point for the dog is THE TOY!!! Each dog is allowed their favourite toy or to play tug-o-war with a toy once the body has been found and that is all they want… 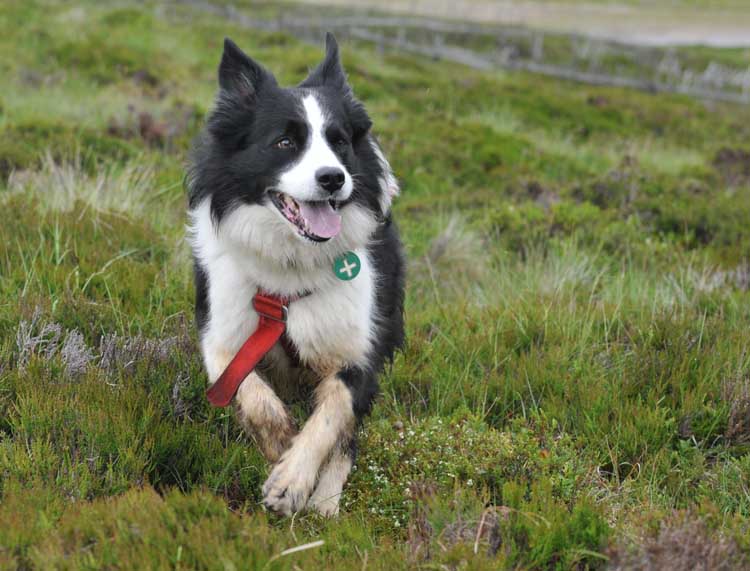 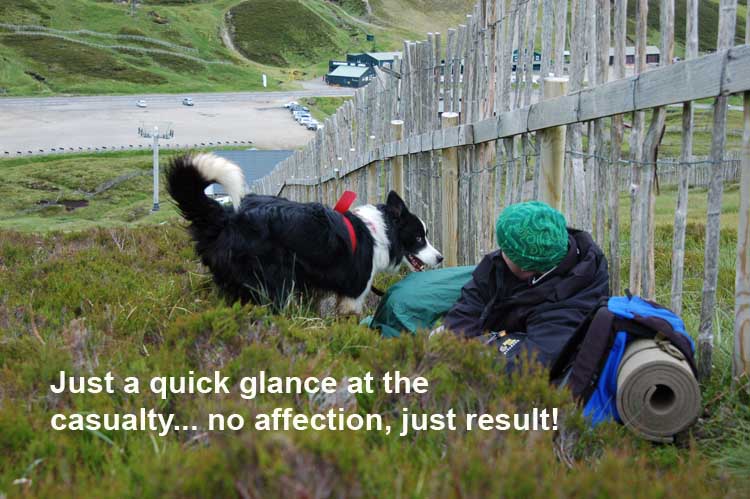 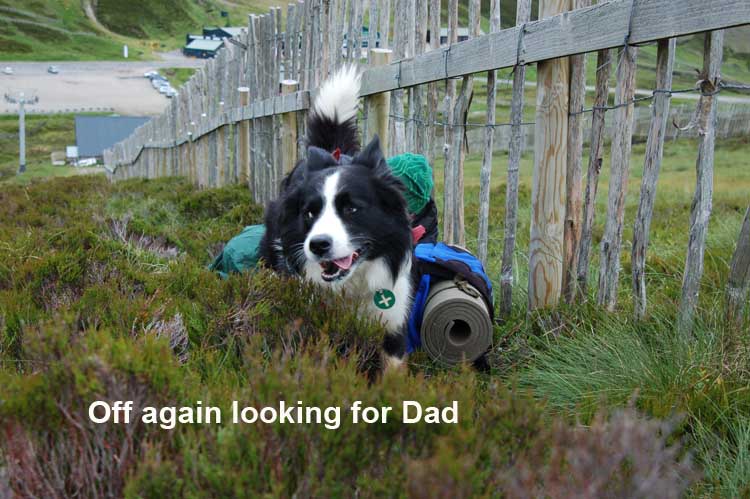 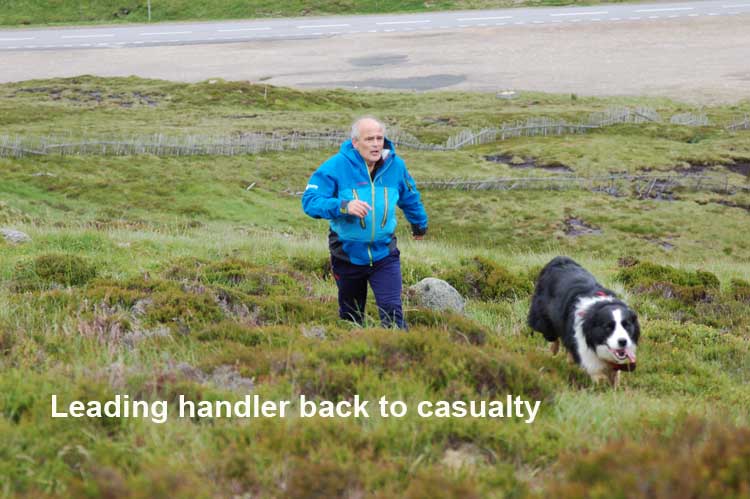 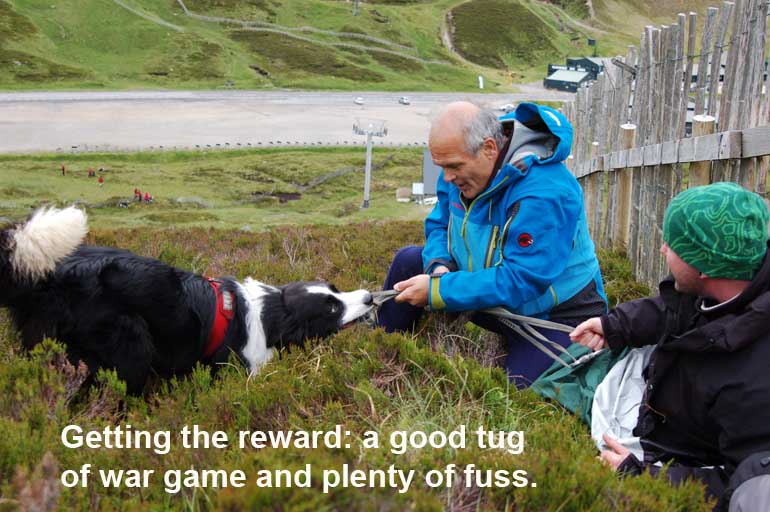 I also got a chance to be a casualty my self. The dog found me, got its handler and was desperate to have its toy. Simple. 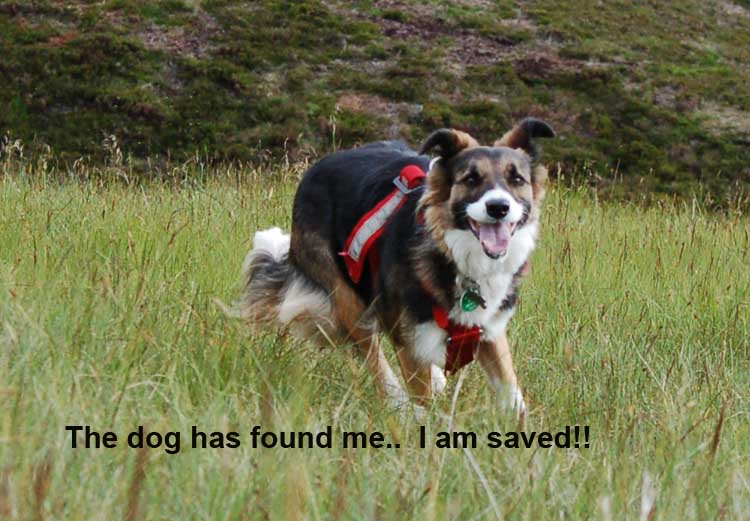 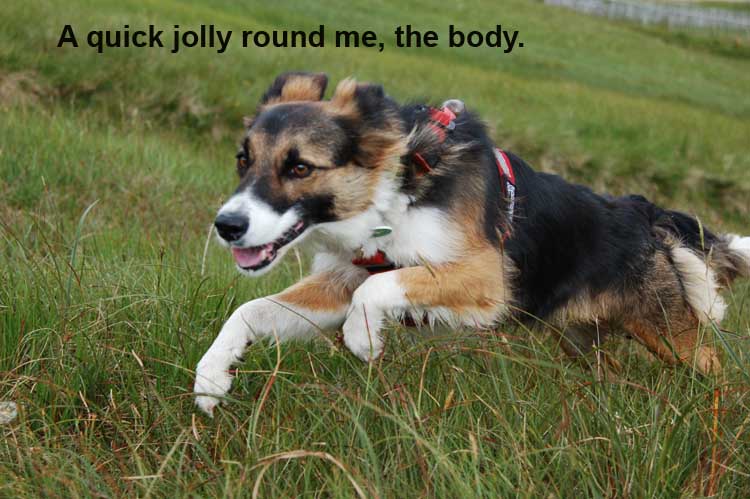 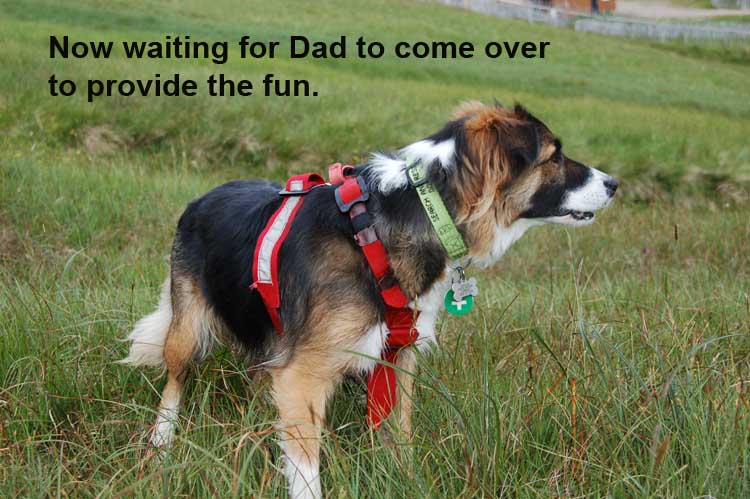 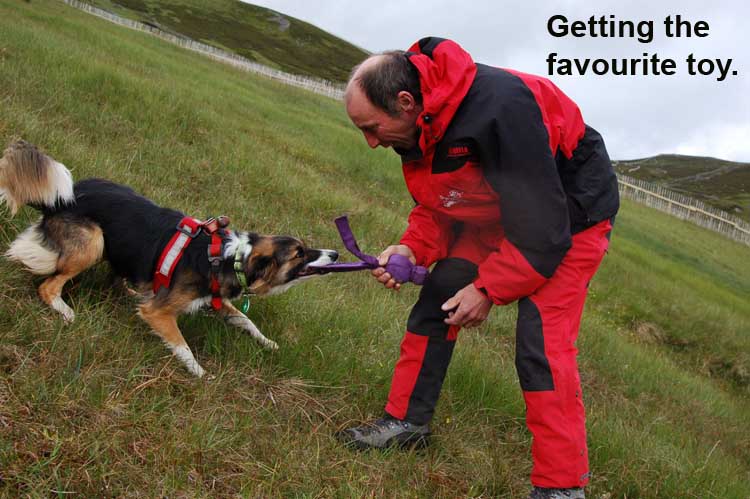 It was GREAT and a fantastic privilege to be out with these, terribly fit, dedicated people. Some of them are called out almost twice a week to use their dogs to look for missing persons, who can be lost walkers, old vulnerable people or children. They are not paid, it is entirely voluntary. With great dedication and enthusiasm they keep their dogs fit and ready 24 hours a day, 365 days a year. Sometimes searches are in deep snow or during the night. Salute these folk and don’t forget that there is an appeal on their web site because although they all give their time, they are always looking for equipment etc. It all mounts up. Have a look at this page.