After Gaia came home with us from Denmark, it got rather hectic as Christmas came along and the dog bed manufacturing was all-consuming right up to the last day. So Gaia was left to just get used to our house and the other dogs and live at Tuffies in general. Christmas involved family and friends around and everyone seemed to get a good dose of the flu, so we didn’t get much constructive training done. 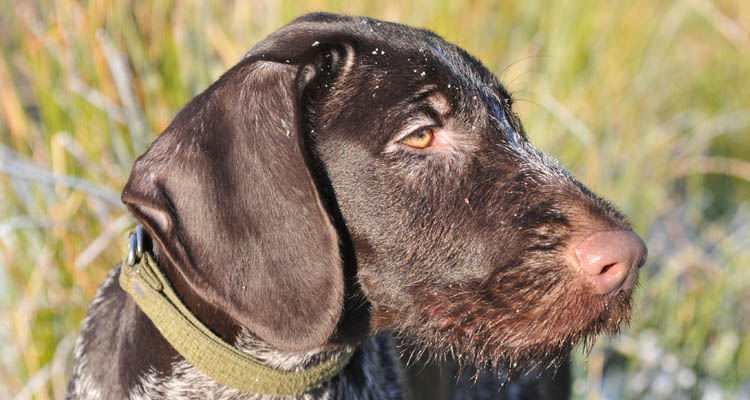 So this has to be sorted now and Gaia comes out most days for basic obedience training, even just for 20 minutes at a time. She is of course also being trained in general house manners. Basically to behave almost as one would like an adult dog to behave. Here are some photos of today’s training as the weather was nice and clear.

The all-important stop-whistle is being implemented and the sit and stay is being built in too. Here she has been stopped at heel and I have told her to stay and walked away about 25 meters. 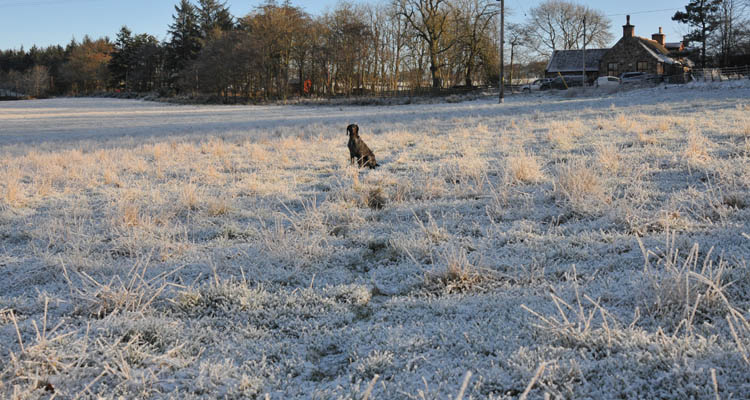 And sit-stay on the other side of the stream, which seems more disconcerting for her. It took me a few attempts to make it over the stream without her following. 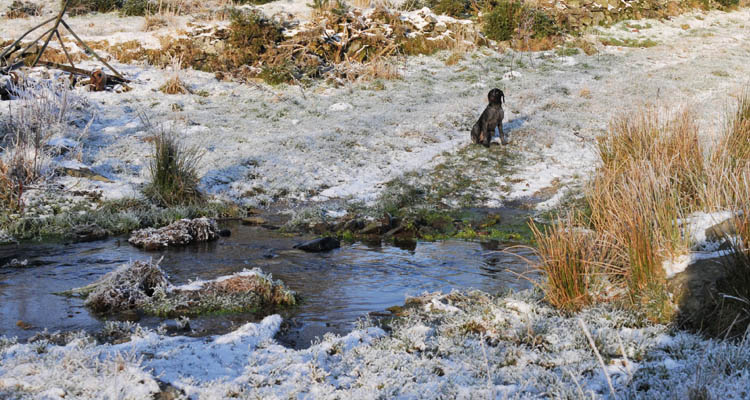 I have also decided to get her to go flat down on command and stay there. This is going to be built in on a separate whistle and the reason for this trick is that if the dog hits the deck on a special whistle with its head between its paws, it can’t see the hare that you don’t want it to chase….

Here I have put her down on the ground and walked away. Later she should go down in that position by a whistle-blow from a distance. 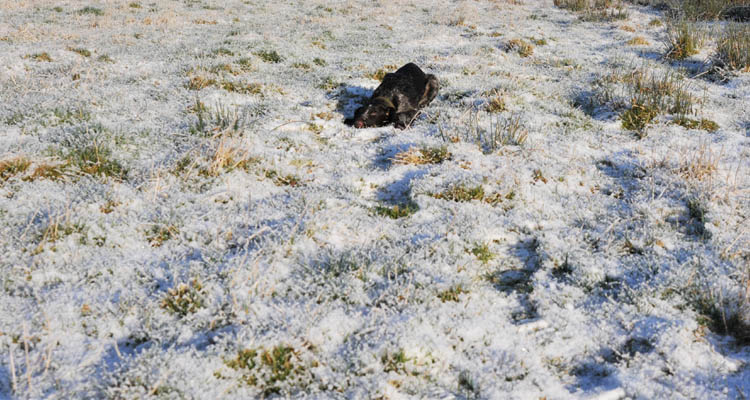 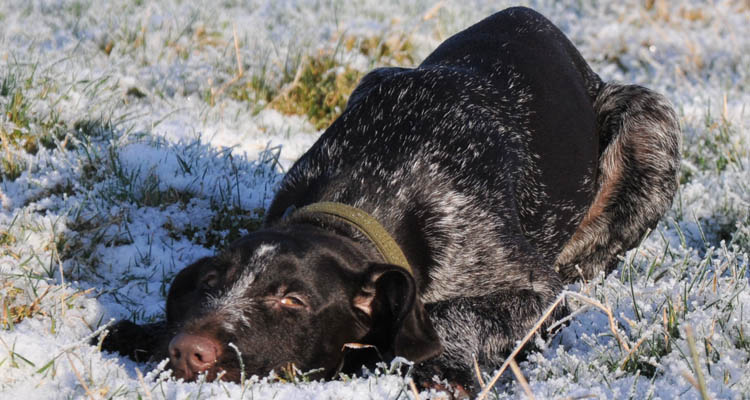 It’s good to get on with the water asap, but right now it really is very cold for swimming and I don’t want to put her totally off. So I have just kept it to paddling and this is looking a bit cold in itself. 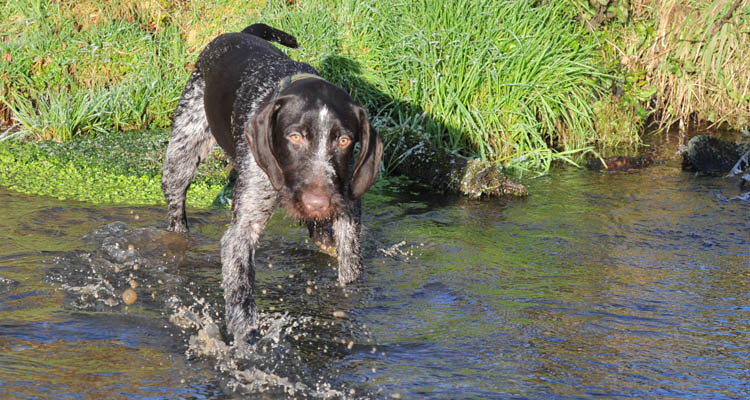 After a bit of all this boring discipline, it was time for some “hunting” and Gaia certainly loves the running and searching. She has a nice pattern across the wind and is looking out for me all the time, which makes it easier to guide her direction with my body movements. 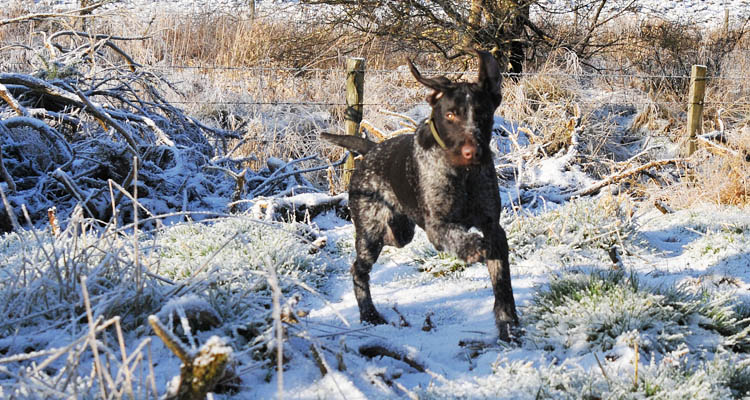 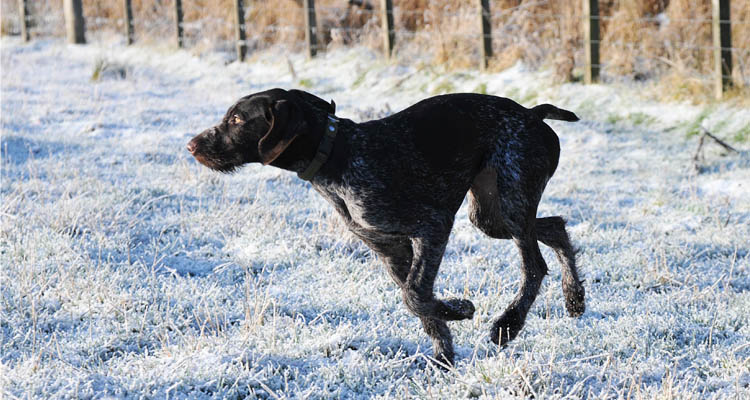 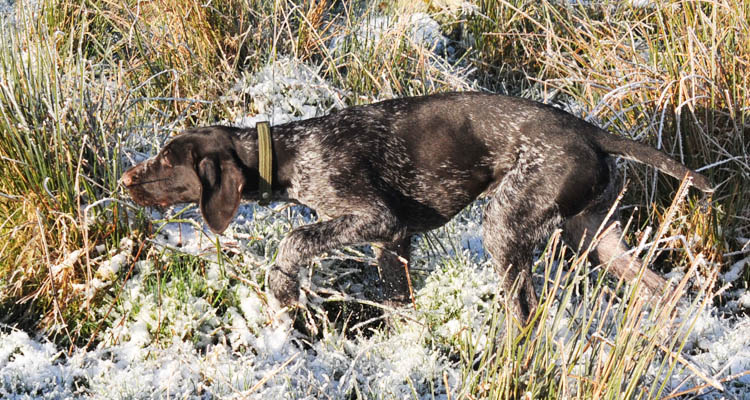 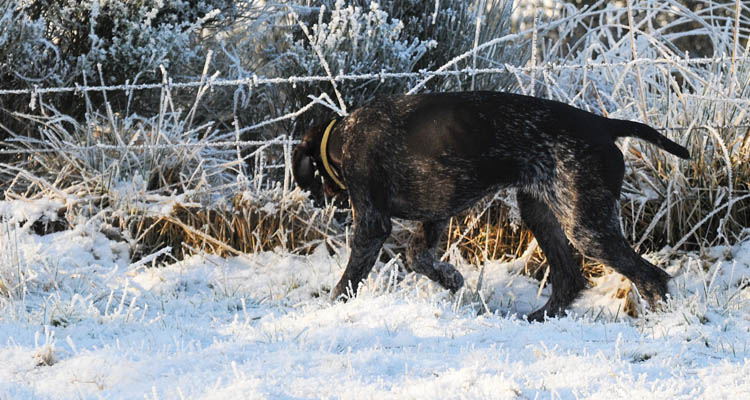 The retrieving is proving to be challenging as she doesn’t seem to have any interest. I confine this to play indoors for now and with a little piece of cheese, she can be persuaded to give up the dummy (if she has bothered to pick it up) if I sit on her dog bed and pretend to be a vending machine: put dummy in mum’s hand, claim cheese bit. Whatever it takes….