After some upset on Facebook over this I thought it best for a clearer and correct understanding of the writing below to call this it’s UK title, the controled retrieve.
No!!!! Not all Wirehaired pointers have hard mouths!!! However, when breeding the German Wirehaired Pointer, a very strong hunting instinct is favoured. This is because we want a dog that will keep on going with enthusiasm and drive all day. To see a dog loving the work all day is a true delight. Now, with that territory inevitably comes a somewhat keen attitude to the game. Let’s say there can be a touch of ownership attitude in the sense that the dog hunts for himself and sees the game as his. Training a dog like that is a great challenge because you have to make him understand that the game belongs to you and only by co-operating with the handler will he be invited back. So the dog has to find the birds, be steady on point, flush the birds on command and indeed curtail his instinct to go and fetch straight away. He has to go out, on command, and carefully pick up his master’s game in order to bring it back in perfect condition for the kitchen. All of this goes against the dog’s nature. However, if we don’t achieve this mind-set in the dog, we lose control and the day ends in tears. With plenty of experience the hunting dog learns that co-operation with the guns means more fun and more game to retrieve.

In this blog I am addressing the retrieve part of the work. When a dog loves the hunt so much there is a danger that he, in his excitement, damages the bird when he picks it up. This is no good when the idea is to use the game for human consumption.
Let’s firstly agree that birds shot sustainably in the wild, heading for the kitchen, is better than mass-farmed chickens, scoped up with machinery! Happy meat as we call it.

The controlled retrieve simply consists of two parts: firstly teaching the dog to hold an object (dummy or game) tenderly in its mouth and secondly to pick the object up even when it doesn’t feel like it. The “controlling” just happens when the dog refuses to pick up and you make it clear that retrieving is NOT optional.

First the dog has to learn to HOLD the training dummy (here a soft toy). I have her on the lead and place the dummy in her mouth. In the beginning she simply spits it out, but she soon learns to have it there. Every time she spits it out, I put it back in with the command “HOLD”. 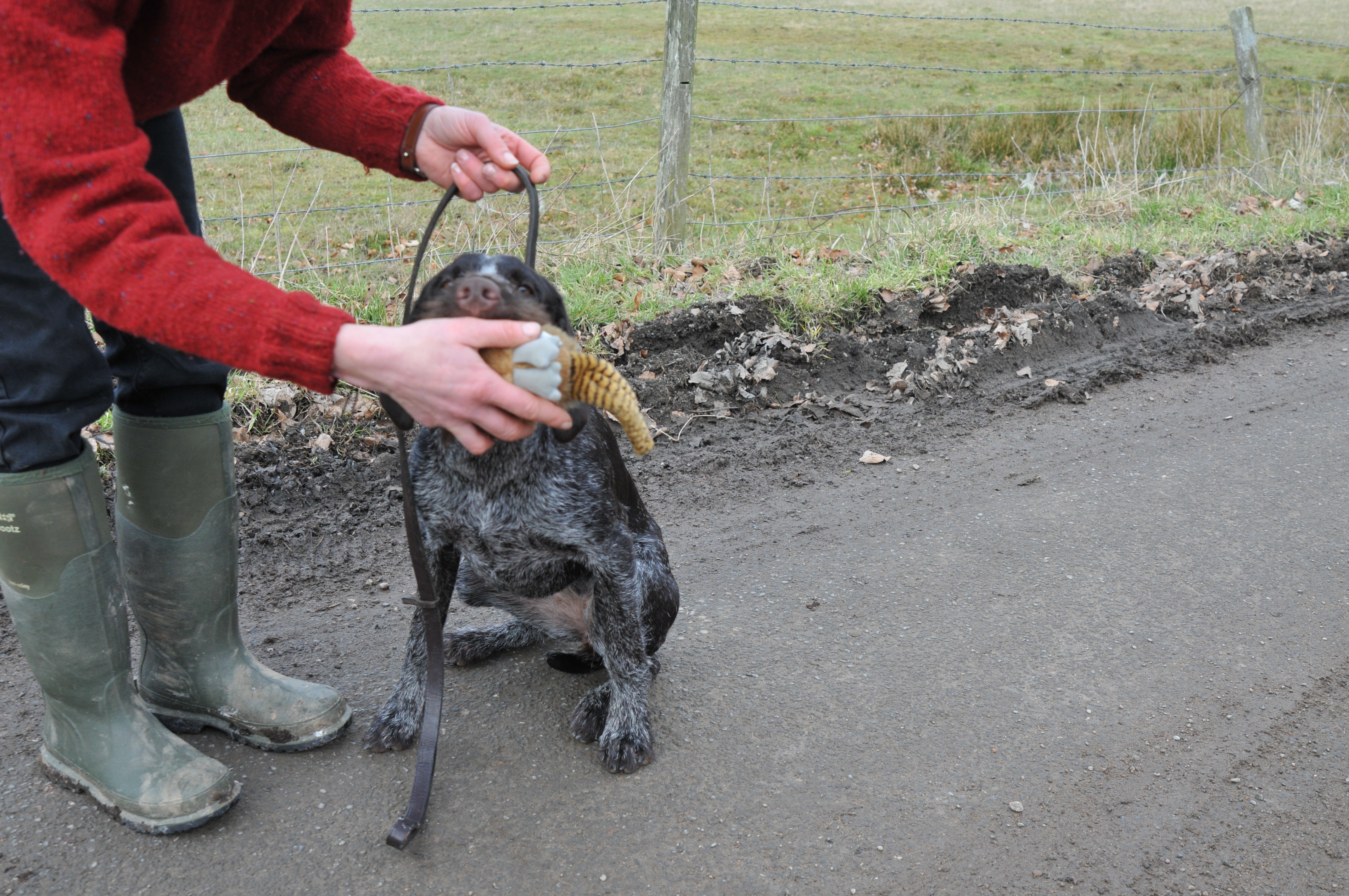 The lead helps to make her understand that I am in charge and that she needs to hold the dummy. A firm tuck at the lead focuses her mind. 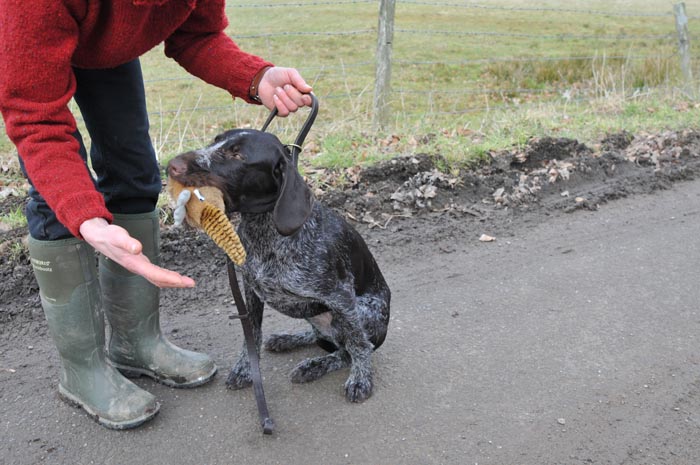 Once she understands not to spit it out, I make a point of stroking her and praising her, but she must still understand that I am in charge. I also make sure that she still holds the dummy even when my hand is under her mouth. This is a vital part of the training because if I detect ANY biting on the dummy, I respond with a “A-A-NO!” She understands that this is MY property and she cannot chew on it. She has a submissive ear-position. This soft toy is great as it is stuffed with some noisy filling, which makes a sound if she bites. It makes it easier for me to know when she squeezes and to stop her. 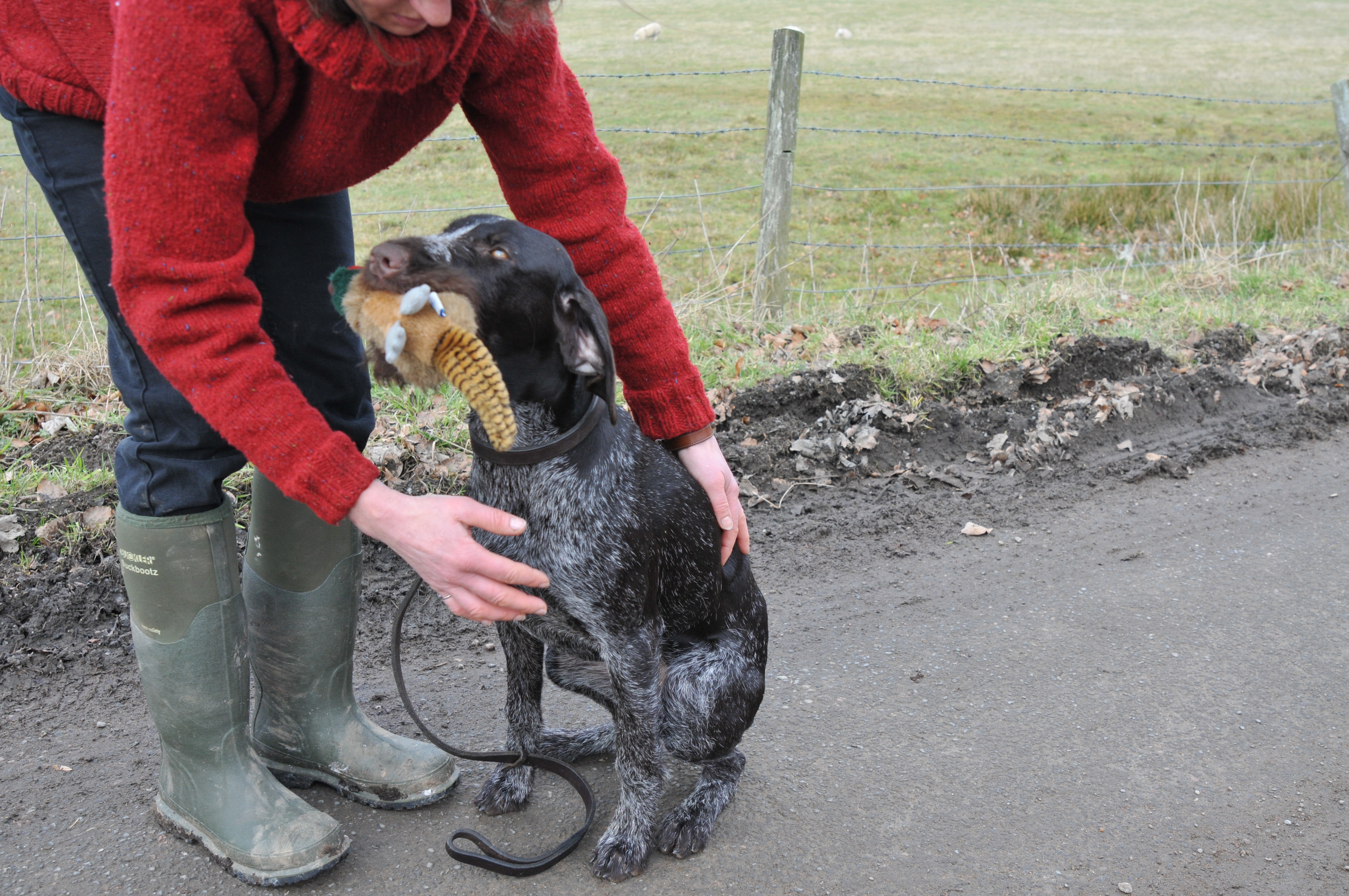 She now needs to learn to let go and deliver on command, so on the word “DROP” I ease the dummy out of her mouth. She is very happy to let go of it.

The next step is to make her HOLD the dummy and carry it. Here I am leading her while I emphasise the command “HOLD”. 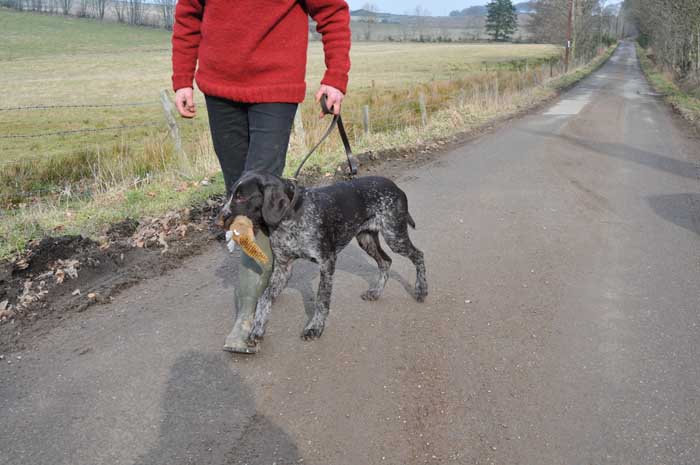 And then I sit her down before the command “DROP”. 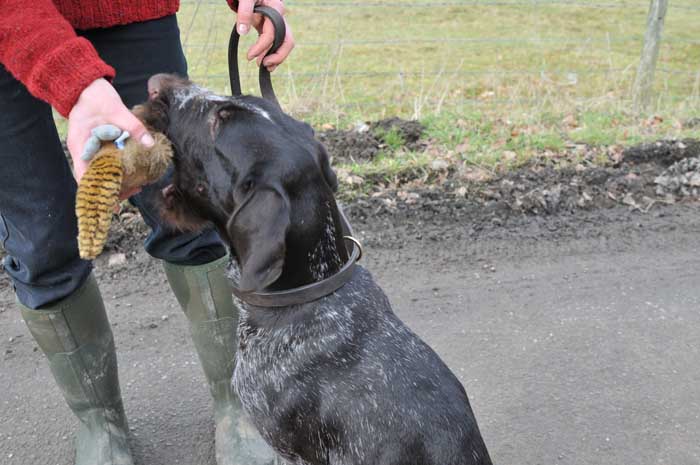 Now I need her to carry the dummy carefully to me. I have established the very important impression on her through the “HOLD” command. She knows that the object has to be held very, very tenderly. As I sit her down at a distance, I back away whilst facing her and repeating the HOLD command. Then I call her, but I keep reminding her of the HOLD. She understands that this dummy is mine, not hers and from the pictures below you can see her agreeable walk towards me. 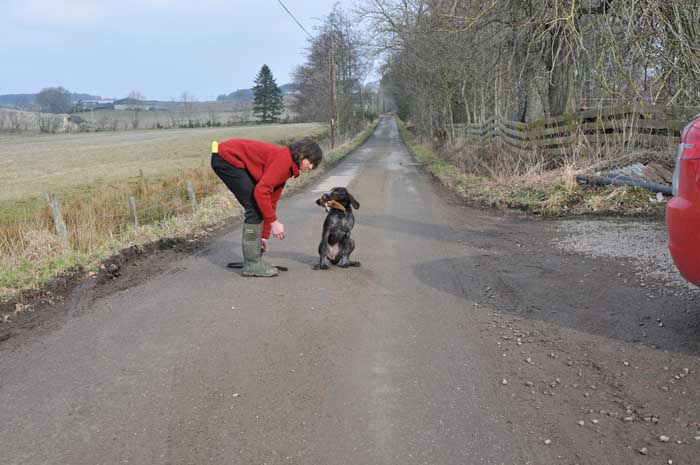 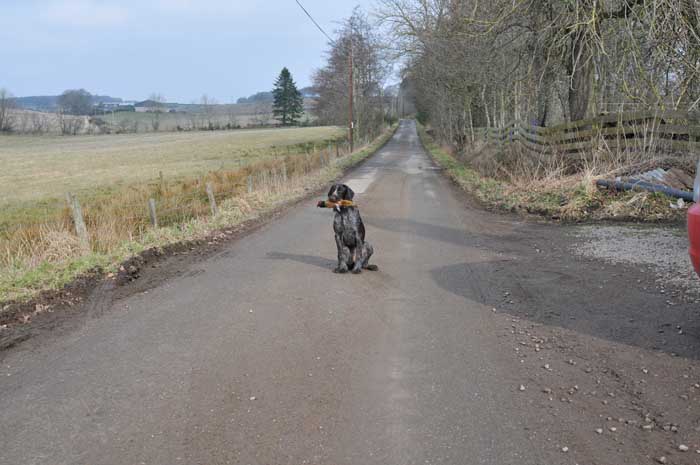 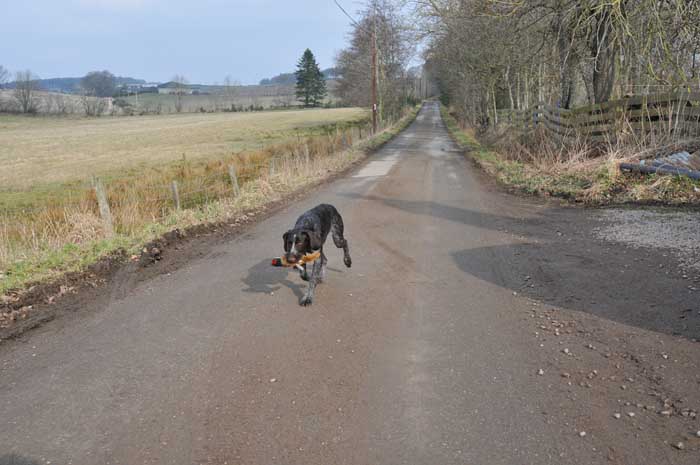 Now to the next stage: Actually taking the dummy on command, which is the step before picking it up at a distance.
I mix the dummies all the time and here I am using a soft Kong type dummy. This exercise can be really tricky and let me warn you: it can seem like nothing is happening for days or even weeks when the dog doesn’t want to “FETCH” the dummy from your hand, but trust me, the penny will drop eventually. Holding the dummy in front of her mouth I say “FETCH”, open her mouth and put the dummy in, then say HOLD. Suddenly one day she opens her mouth and actively takes the dummy for which she get a HUGE amount of praise. Repeating this exercise will end up with the dog understanding what you mean. Titbits are fine to make the praise better. In the pictures below the dog has learnt to take the dummy on the “FETCH” command, but if she at any time refuses to do this then it is a matter of giving a tuck on the lead. The whole point of this is to make her fetch that dummy because she knows her master wants it, not because she just wants to do it for her self. Most Labradors have been bred to have a soft mouth and an insatiable appetite for retrieving and you will rarely have this problem.

Once she has understood the fetch command and takes it from my hand, I put it on the ground in front of me and make her fetch it from there, which is done in little bits at a time: I hold the dummy near the ground, dog on the lead, and say the command FETCH. She reaches out and takes it very carefully. The moment she reaches it, I also say HOLD. This is all to prepare for the fetch in the field, where she is away from me and needs to pick up the bird under my command. 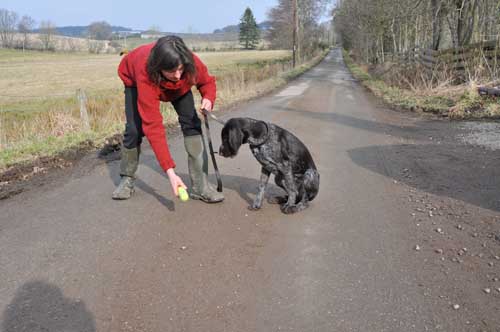 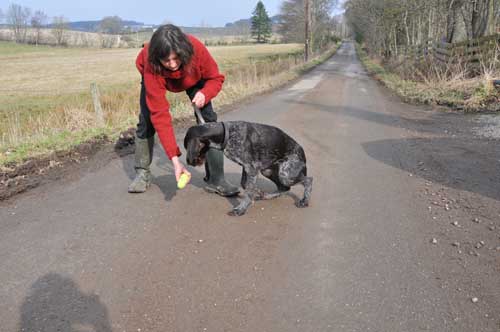 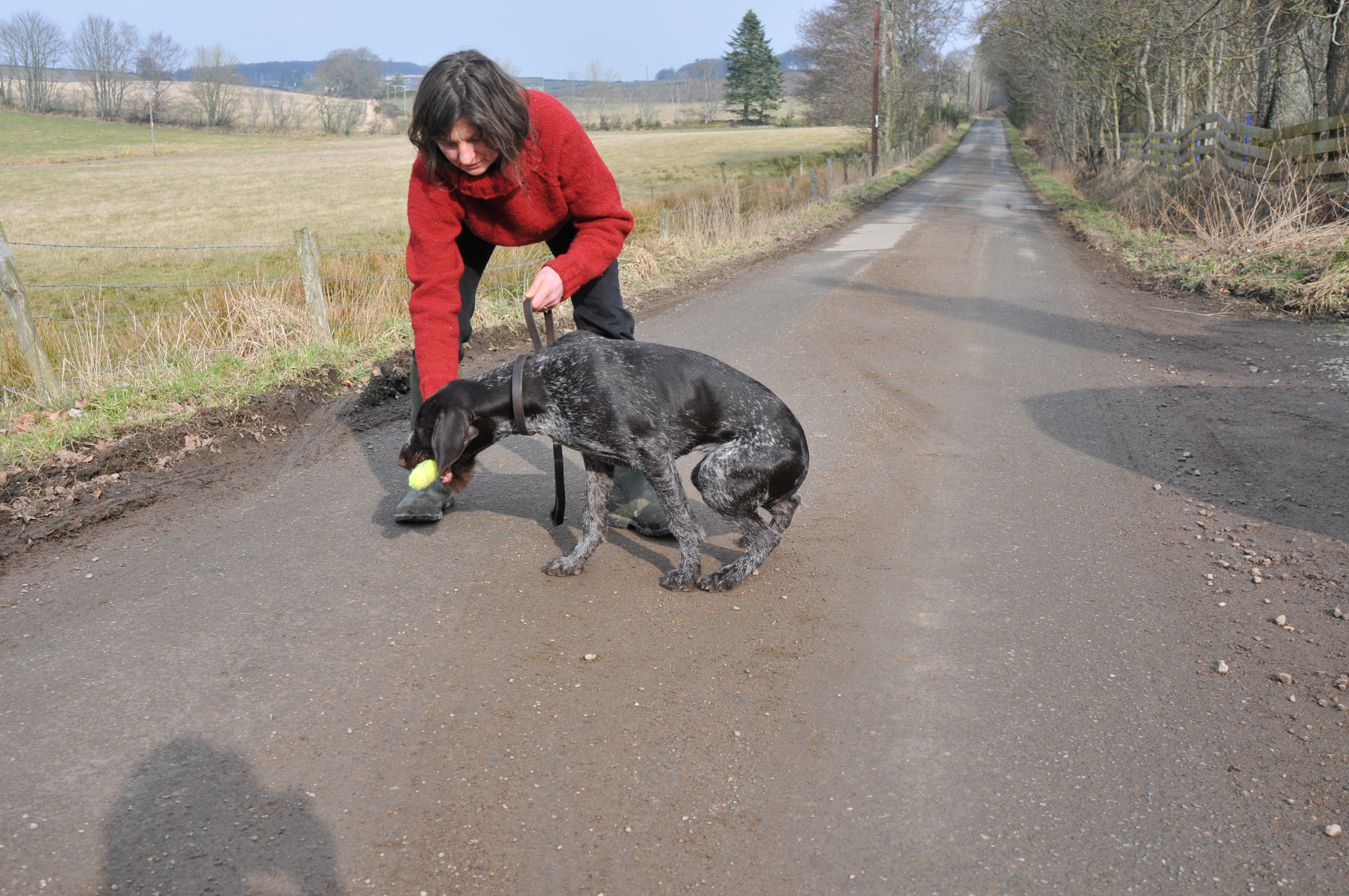 The pictures below show her taking the dummy, holding it whilst being praised and letting go on command. The lead is off, only a collar to keep her in check in case she decides not to do as she is told. 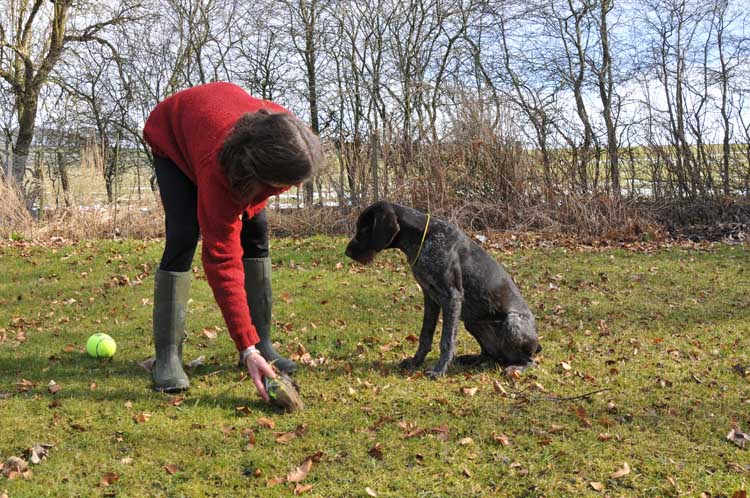 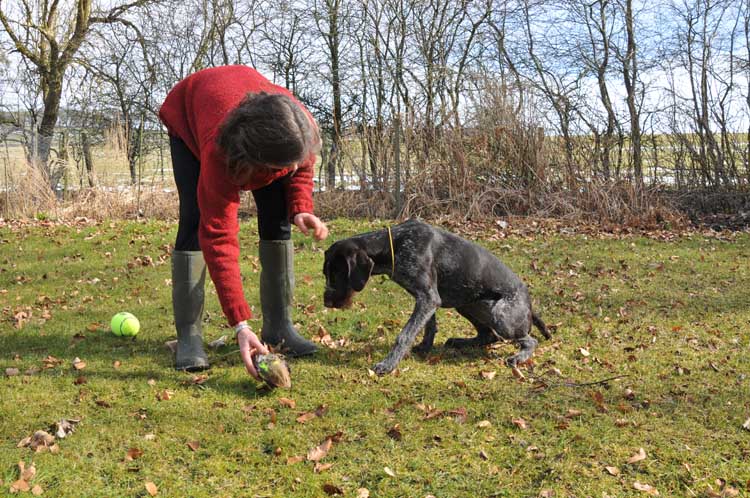 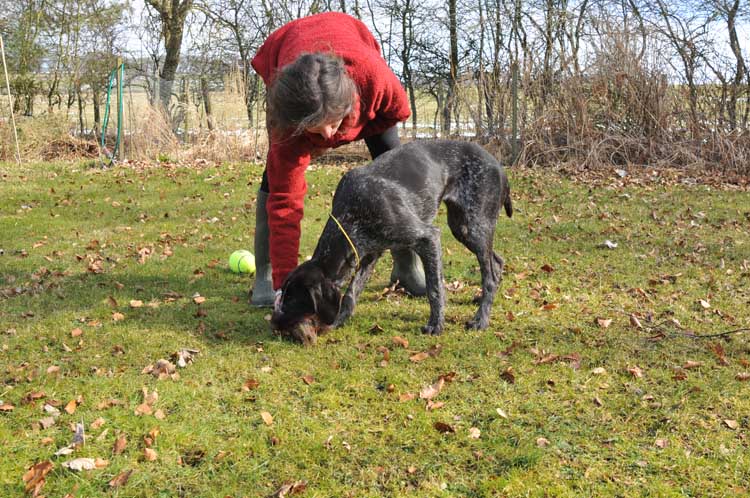 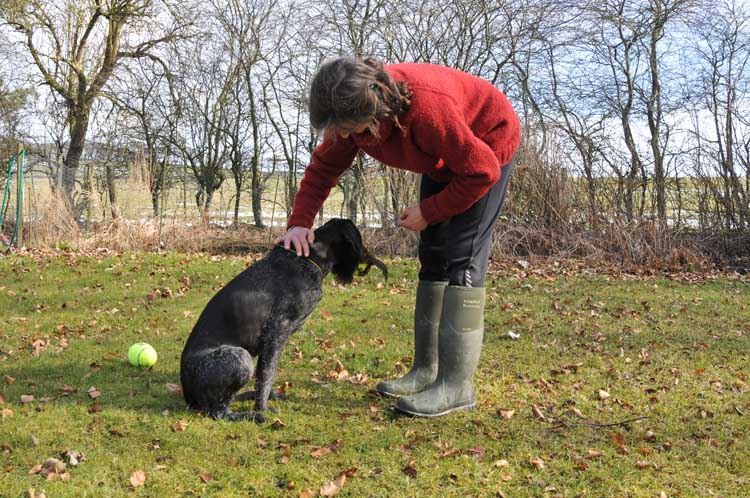 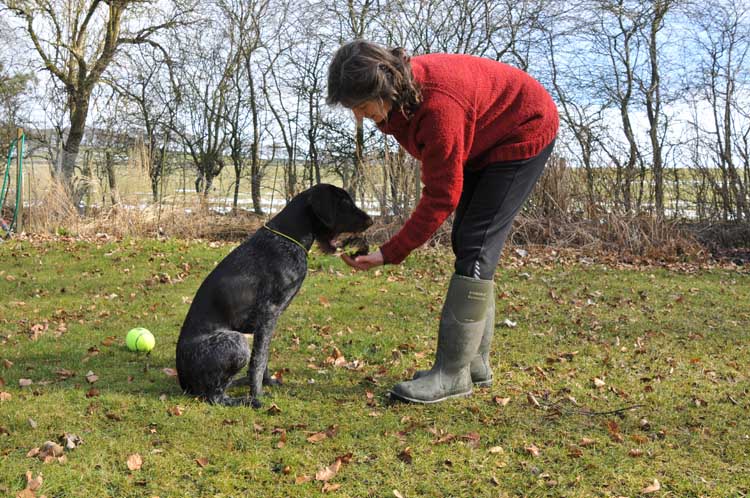 The yellow dummies I am using here are fabulous. They are Squeaky AirKongs. No, we don’t sell them, maybe we should: they are big and bouncy, but they squeak at the slightest squeeze. That way you know exactly what is going on if the dog is hard on it at any time. I have stuck feathers on one of them for effect. 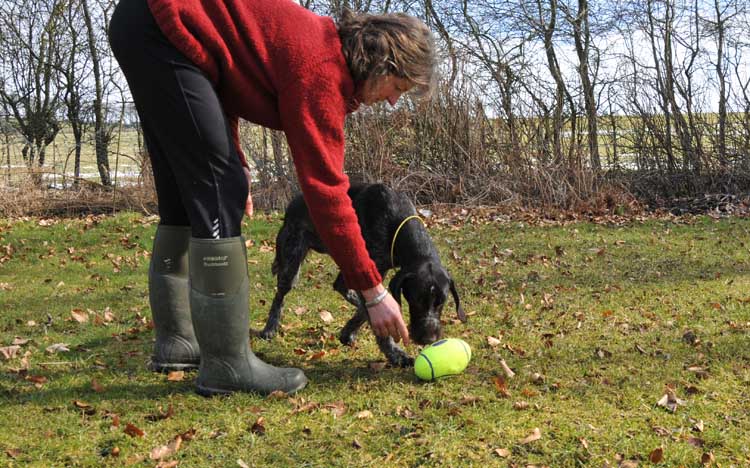 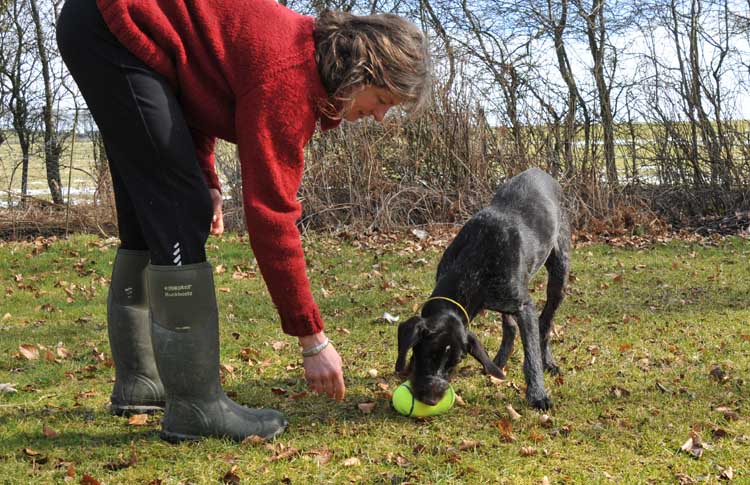 I leave the dummy about 15 meters away and send her to pick it up. As you can see, she bounces towards it, which is usually a sure sign that she is going to “kill” it when she gets there. So JUST as she arrives at the dummy I say HOLD!!! And as you can see in the picture, she picks it up carefully and returns to me in a slower pace with her tail a bit down and her ears in submissive position. Delivery is nice and an enormous fuss is made. 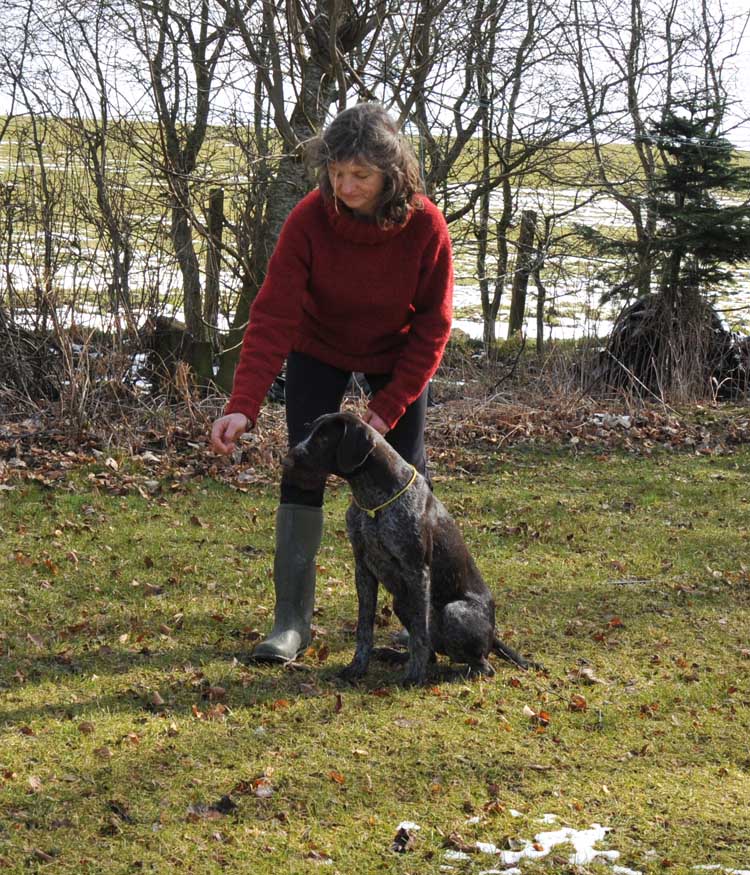 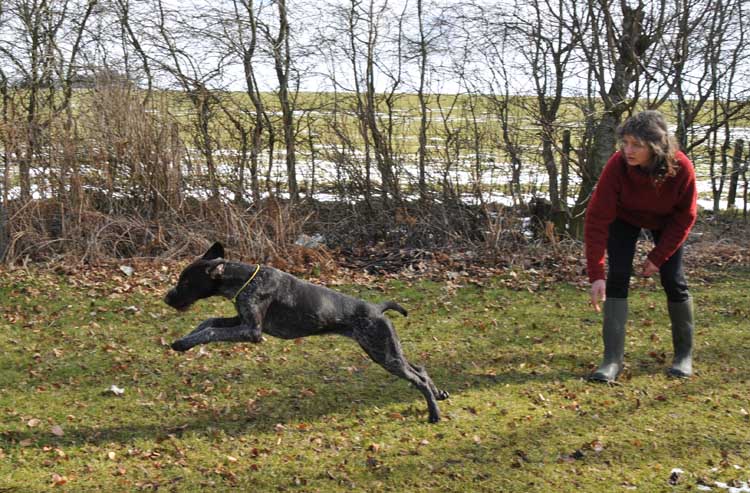 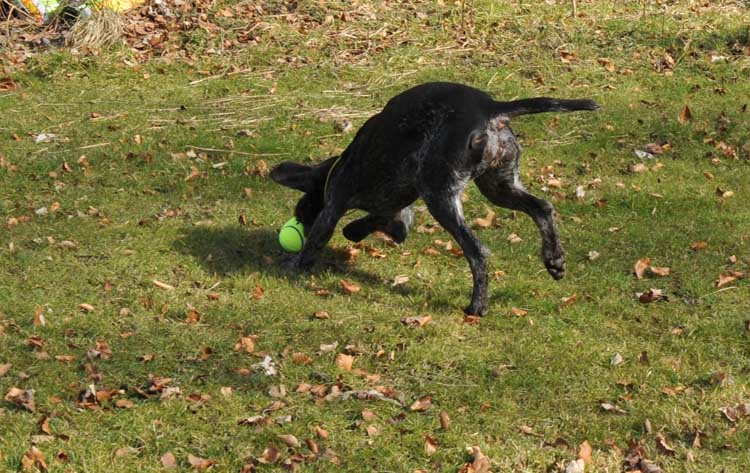 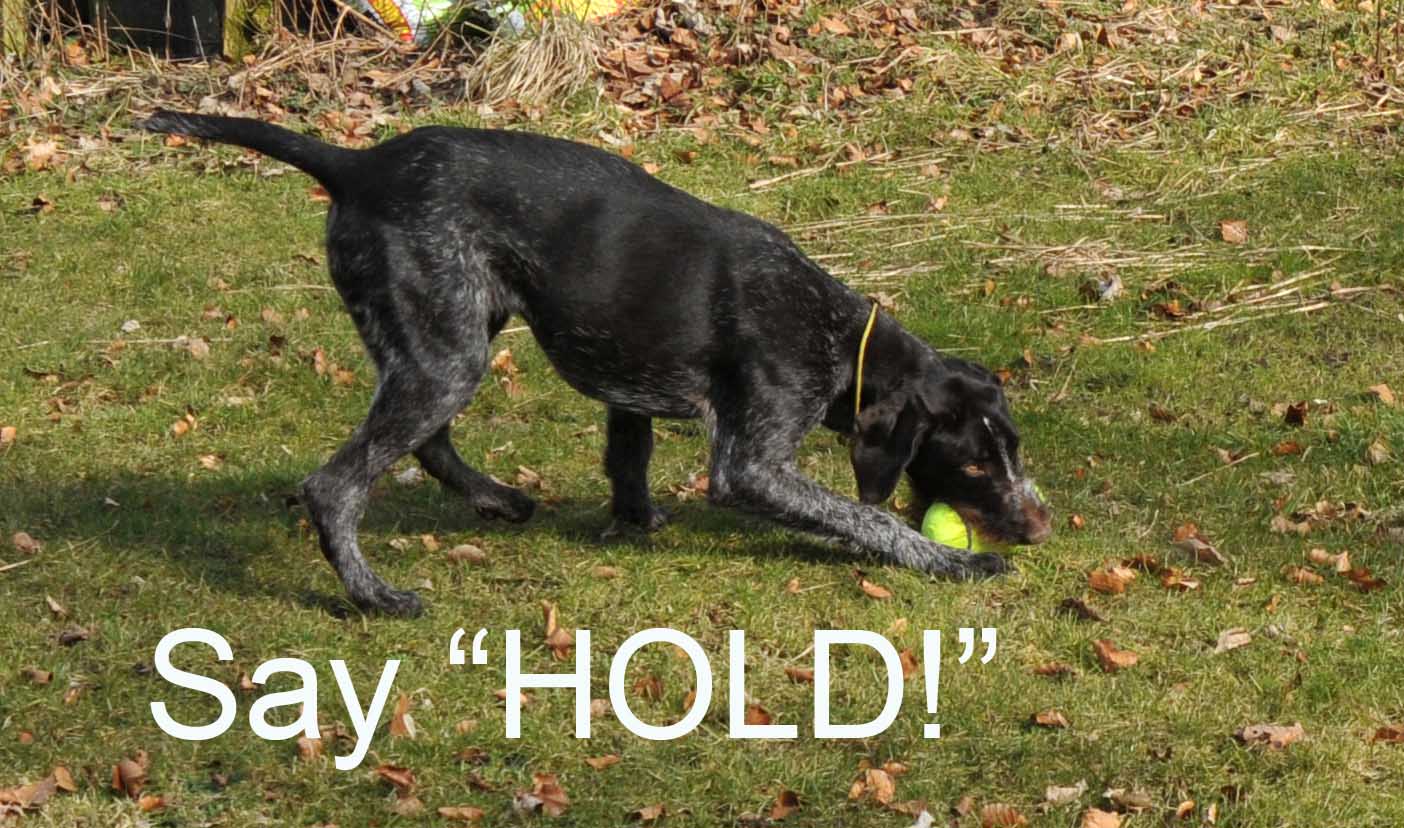 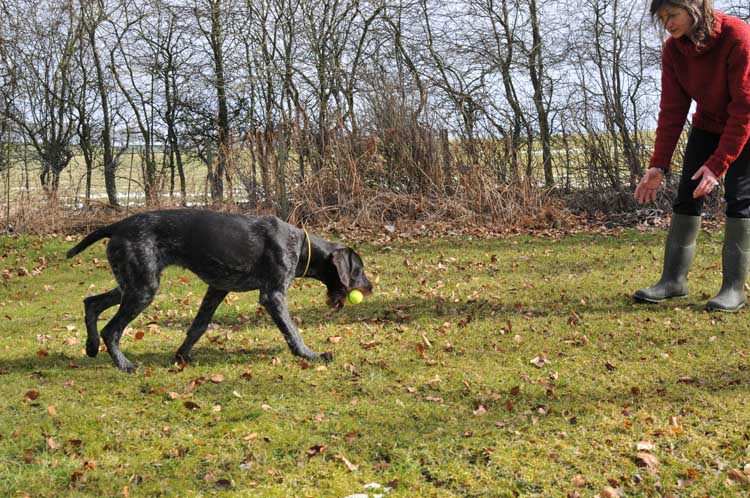 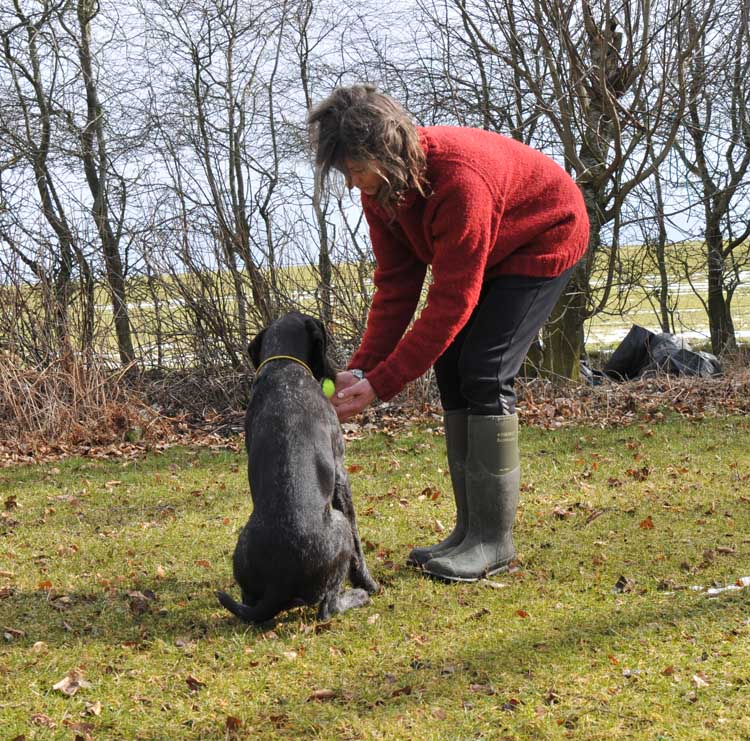 If you can extend this dicipline to the field when everything is super exciting, you will get a long way towards a dog with a soft mouth.

It takes patience, but again, if we are going to defend field sport, we should always take care that the quarry is treated with respect and that it is used in the kitchen. Careful picking up by dogs is the first stage of this.