….and Then the Wheels Fell off.

As my dearest friend, Anne Johnson, says: “With pointers, in particular, just when you think things are going beautifully, then one of the wheels come off …….”

And that is so true. It has been a while since I wrote the last Pointer Blog because of course I wanted to write about the splendid progress of Pontus, but the wheels have come off!!!

After a successful grouse season 2017, where Pontus was hunting nicely and pointing grouse (although he was slightly “creeping” in on them while on point), we progressed to days of walking out looking for the odd pheasant for the pot and later woodcock. It can be difficult to find good pheasants that have not been disturbed too much and they tend to run rather than sit, which is not ideal for pointers, especially a young dog. But I have had opportunities, especially thanks to our lovely neighbours who allow me to take a dog and gun out on their land, where I can come across the odd bird. But Pontus has made far too many mistakes on these hunts. He runs well and not too far away from me, but IF he detects the scent of a pheasant (often he doesn’t even notice them…), he will take the pointing position briefly, but he then continues to creep forward till he is too close to the bird, which then flushes. He is very well trained on the stop whistle, but that has no effect at all in the excitement of having a bird on the nose and he takes no notice of my whistling.

I scratch my head having bred this dog out of two exceptional pointers. OK, Gaia DID take her time to point staunchly (she was close to two years old), so I am still hoping, but Pontus’ father is FTCh and has won many open trials beyond that. I will take my time and now it is end of April, I can’t train Pontus in the fields where birds might be nesting, but I can train him endlessly on retrieves. This is OK because simply training complicated retrieves and water retrieves will help keeping our relationship as wonderful as it is already. He is such a lovely, happy and connected dog, I just hope the true game pointing will appear in the autumn.

We went woodcock hunting in the winter and Pontus hardly got the idea at all. The birds are difficult and to have a dog that bumps them is most frustrating. Gaia and Gollum are both quite reliable when it comes to woodcock pointing and we had good days out. Even with really good guns, by FAR the most birds disappear before you can even raise the gun. In some places we find birds every 5 minutes, but they often sit in thick cover where a shot is not even attempted. Pontus came along every day and although I was sometimes trying to use my 20 bore, I was also trying to place him right behind Gaia or Gollum while they were on point, but it didn’t make a huge impression on Pontus.

Some pointers don’t point till they are well over two years, so I will keep my hopes up. Once the brood counting starts in July and August on the grouse moors I will be out there with Pontus in the hope that maturity has set in and he will be more on the ball.

Here is Gaia on point at a classic spot: a woodcock sits under a fallen tree in woodland. And yes, there was a bird there. And yes, it got away too. 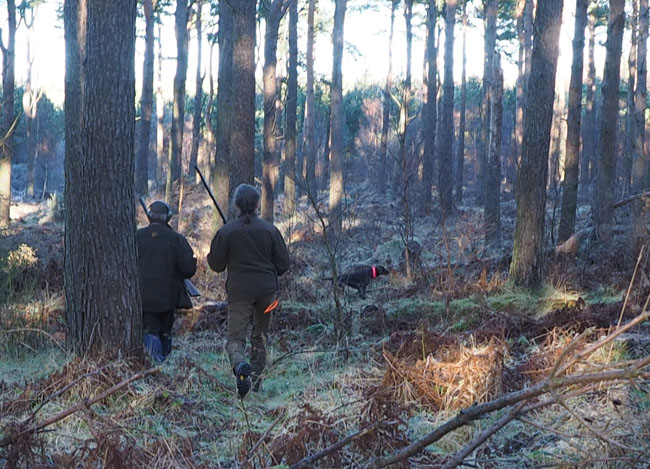 Gaia on point with the guns walking up to her. 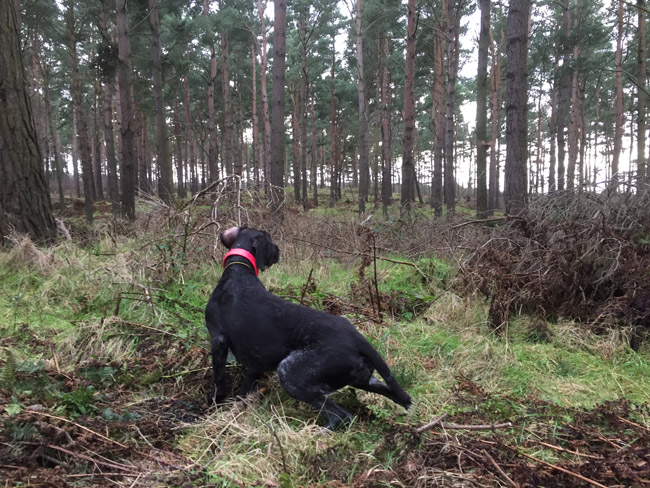 The classic flash-point. A bird in the bush.

I went to Skye and the west coast and Isle of Muck. Pontus liked the boat trip….. 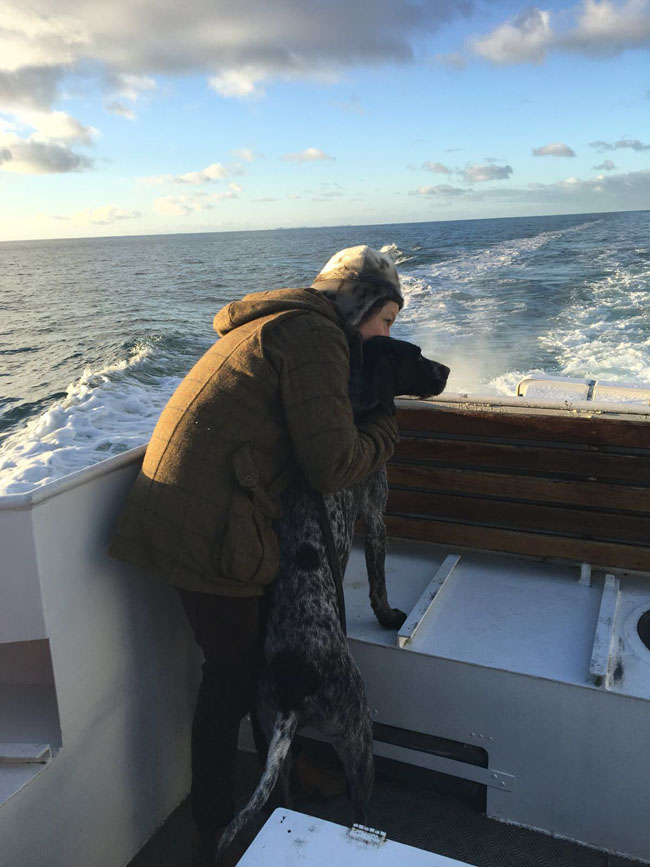 Pontus on the boat from Isle of Muck.

On every photograph taken in the field, Pontus looks adoringly at me, but it’s a bit like “Lights on, but nobody home”. 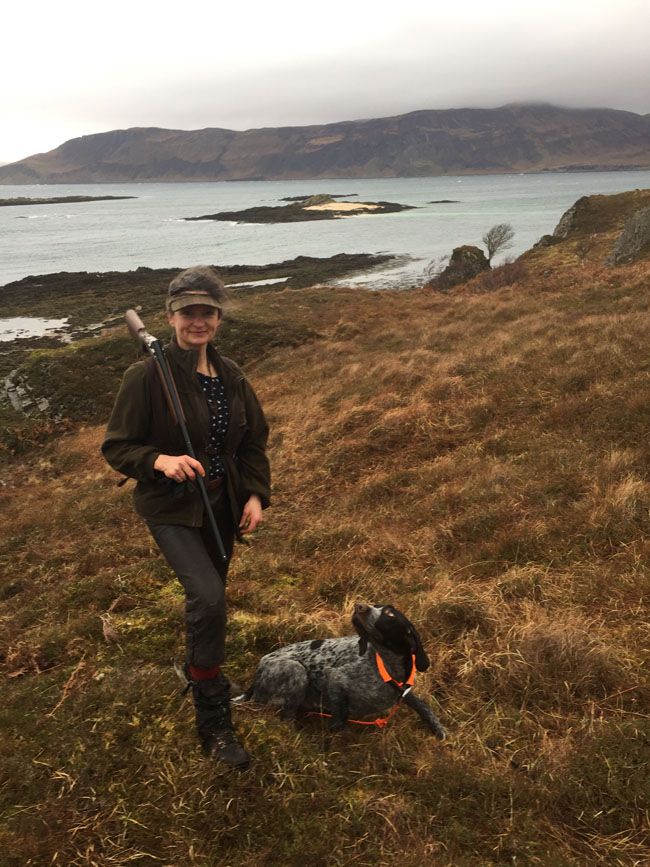 Looking for woodcock on Skye. Pontus looking for me. 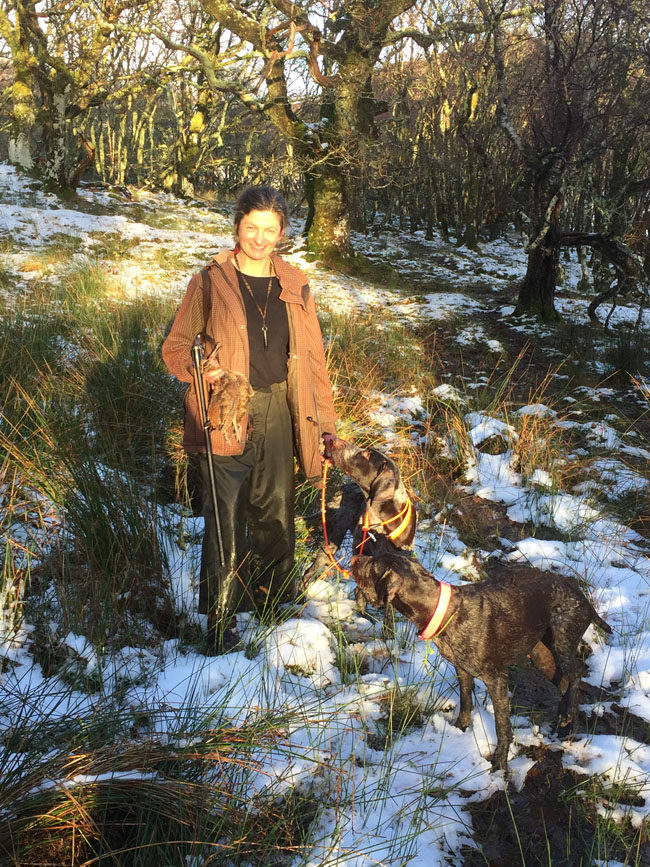 Again, Pontus fixed on my face.

At least Pontus’ modelling career is going well. The dog bed side of his life is indisputable….  Here he is modelling The Raised Tuffies Bed. 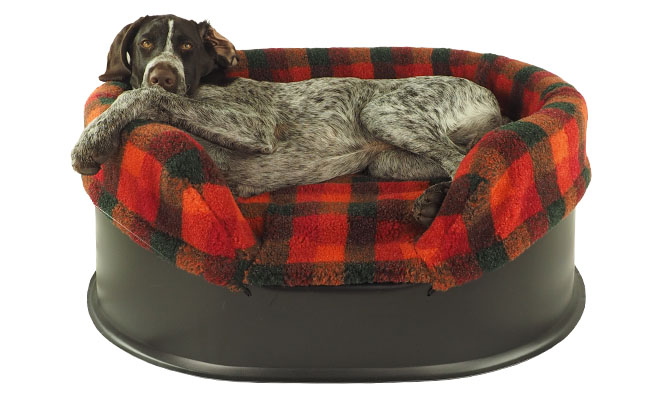