Dog Beds for The Queen and 007

When Daniel Craig, as James Bond, went to the Palace to pick up Her Majesty for his Olympic opening stunt, our eyes were on stalks here at Tuffies. Why? Because not so long before that time we had given The Queen one of our dog beds as a special Jubilee present. Special indeed! We made a crown shaped nest in a waterproof fabric, antique gold in colour. We were in big doubt what to do about the cushion in the middle. We really couldn’t decide whether to make it plain and put a purple or burgundy Luxury Fleece cover on it or whether to leave it exposed and, in turn, make it into a Union Jack. We finally decided for the latter and the whole project resulted in the beauty pictured below. 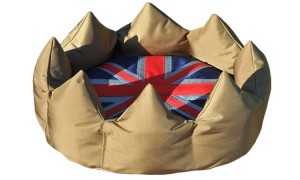 Tuffies crown nest made for the queens jubilee

Needless to say, we made it in a Corgi size to accommodate the famous dogs at Buckingham Palace.

So when 007 went through the corridors of Buckingham, we were scanning the floor space for any Tuffie beds. I am sure there would have been a phone call asking for support for the product placement if the Olympic film crew had accepted the Tuffie dog beds to be part of the furniture during the clip. We did of course get a beautiful letter from the Lady in Waiting expressing a big thank you on her Majesty’s behalf.

You do wonder how the Corgis sleep. Maybe on the Queen’s bed? Or do they have Royal kennels outside? Does a Corgi know that it is a Royal dog? It must be a funny life to be a wee dog in a castle, much loved by one of the world’s most famous people.

The dog beds at Sandhurst are in part Tuffies, we know that. There is no lack of luxury there and the dogs will be looked after to absolute perfection by the ‘keepers. We know that the Really Tough Tuffie is used in the

So if Heineken and Aston had major product placements in Skyfall, we should really have had a space there I think. I really think that they should have a strong dog role in the next James Bond film. It could be really funny if Daniel Craig picked up a Tuffie Dog Bed during a shooting scene with the “baddie” and used it as a flak jacket showing the strength. Or we could have the baddie stabbing at Mr Bond getting nowhere thanks to the dog bed….

Well, the imagination runs wild. I definitely think that as Skyfall was partly set in Scotland, we should have been in it.

If you would like your own super tough and comfortable, warm dog bed, don’t hesitate to go to https://www.tuffies.co.uk/browse/c-Nest-beds-and-covers-4