Dogs gazing at you from their dog beds?

Do you have good eye contact with your dog? Does he lounge around on his various dog beds, gazing at you and do you gaze back at him? An exciting piece of research has been done by Japanese scientists where they have looked in to Oxytocin, a hormone normally associated with child birth, but which is increasingly associated with social interactions too. They found that humans who gaze at their dogs and have a gaze back from their dogs produce oxytocin in their blood during the gaze and the dog also produces oxytocin in its blood. 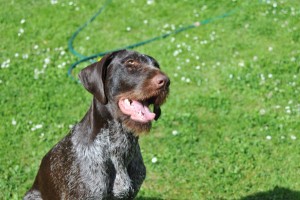 The question was very much about what makes a dog a dog and not a wolf? In other words, when did the wolf become domesticated from being a wild wolf? It is fascinating to think that at SOME stage the humans got so familiar with wolf individuals that they eventually invited them inside their dwellings and gave them dog beds and food leftovers and cared for them the way that we care for our dogs today. When human mothers gaze their babies, both mother and the offspring develop oxytocin in their blood stream reinforcing the loving bond. When wolves became dogs they also developed the ability to express oxytocin in response to the gazing eye contact. We “mother” our dogs to smaller or larger extent and only when the wolf also liked to be a sort of “child” did we develop the strong, loving bond as we see today between dogs and humans. Just look how SOME dog beds are actually looking like little cots!!!!

The interesting control used in the experiment was that no matter how much you cuddle a pet-wolf or how many luxury dog beds you give it, no matter how early you take care of the wolf puppy, it will never develop oxytocin and it is not interested in eye contact. This is purely reserved for the domesticated dog. 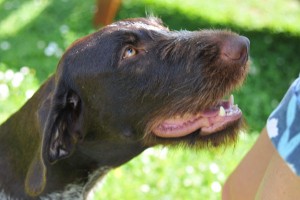 As all good research, the scientists conducted a reverse experiment. They gave dogs oxytocin through a nasal spray. This worked best in female dogs and the researchers found that the dogs with added oxytocin started to gaze more at their humans. When this happened, the humans also started to produce oxytocin in their blood in response to the “loving” dog gaze. In other words, the rise in oxytocin is mutual and interlinked. So when you climb into one of your dog’s dog beds and “talk” to him, you are probably both bursting with loving oxytocin.

We all experience our dogs gazing at us, but sometimes they also want to kiss. Here Gaia is simply desperate to nibble my nose. It’s hard to tell them off and send them to their dog beds just because you don’t want dog slobber, for they will surely sulk and feel rejected as they only wanted to show their love. Aren’t they just simply man’s best friend. We love them. 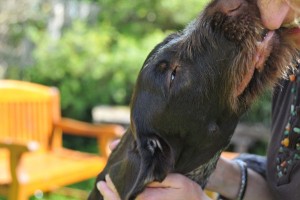