We are still working on producing a fantastic new raised dog bed, it’s just difficult to get the manufacturing price down enough to make it a reasonable purchase for our customers. However, it is very funny to see how dogs like their dog beds in the height. It must have something to do with being able to see what is going on a bit better for they all prefer to be up higher rather than close to the floor. Obviously, as most dog beds are placed low on the floor, most dogs are used to this position and they simply accept it as normal, especially if they have been given one of our really good, warm dog beds. As described earlier, I showed a photo of a dog making his dog bed at the top of a snow covered roof in the Alps. He obviously had a thick coat, so he was cosy enough and first and foremost, these kind of roofy, icy dog beds gave him superb view of what was happening in his neighbourhood. 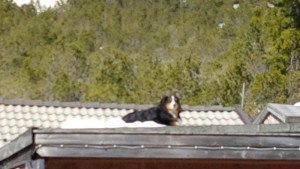 At the other end of the spectrum, here is a picture of an English Pointer in Turkey. It belonged to a shop and was the friendliest creature you could ever meet. She was beautiful and although I don’t know what kind of dog beds they have in Turkey, it was now warm enough for her to spend the day on the roof top. Here she is with the mosque tower behind her, as if it was all set up for the photo opportunity. 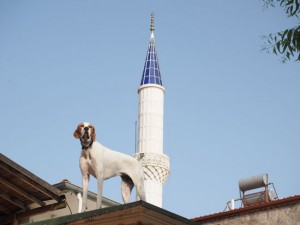 There seem to be a surprising lot of pointers in Turkey, I have spoken to many people, who have been there and it seems to be a popular breed. Turkey welcomes 40 million tourists every year, so it’s not difficult to find someone who has been.

Turkey is a vast country with the warm climate around the Mediterranean and a continental climate in the North Eastern part, where it gets down to minus 40 degrees in the winter. I think the dogs up there will be needing really warm dog beds where as the dogs by the Med will be pleased to sleep on a little mat on the roof.