Raffling Dog Beds in the Rain

Today I entered an All Age Stake field trial. We had all watched the weather forecast and were prepared for a little bit of rain, which would only amount to drizzle. As often, at these events, I am asked to bring a selection of dog beds as there are a few people coming from a long way away and they can save the delivery costs if I bring them along. So loaded with several dog beds in my truck I set off at 7.30 this morning. I was picking up one of the guns, who lives not too far away, so he got a lift. I had tied dog beds up against the back of the load so that Gaia didn’t get knocked over by them nor were able to punch holes in the wrapping plastic when sitting on them. My back seat was filled with guns and dog beds. So off we went on the 40 minutes journey to the grounds, but soon the drips started to appear on the wind screen and we dismissed it as just the edge of the rain cloud that was possible according to the forecast. However, we then hit massive puddles on the road indicating that there had already been a lot of rain in the area. 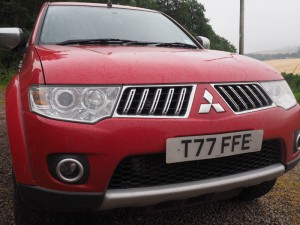 The Tuffie Truck with rain on its windscreen

The problem is that if you go out on the moor to shoot even after the rain has stopped, you are very unfair to the birds because they are wet and heavy (many will quite rightly say that as long as none of the birds are also equipped with shotguns, it is always unfair). Dry birds and windy conditions makes it very difficult to shoot the birds, so by far the most get away. 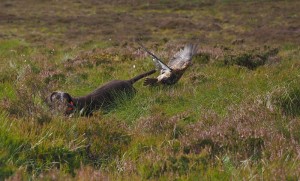 Gaia flushes a bird on a dry, sunny day.

Today there was a further complication because of course this was not just a day’s shooting, it was a competition among the dogs. There are 12 dogs running in a trial and my Gaia was going to run as number 12. If we were to go out on the moor in the rain, she would be walking to heel getting soaked to the skin without getting warm from running. She would become more and more miserable, only wishing she was back on one of her warm kennel dog beds back home. It would be unfair on her to get to number 12 after a couple of hours slow walking and then suddenly take the lead off her and ask her perform at her best, right out of the blue. The first dogs would have a clear advantage over the last dog. 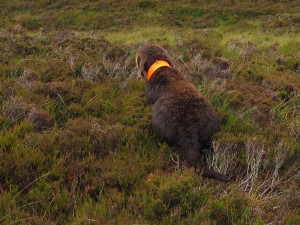 Gollum on point in the heather on a wet day

So every one was at the hut at 9am looking at the grim weather. It was so misty that it would have been dangerous to go out and shoot. You would also easily lose a dog if it went on point in the mist. We spent a jolly morning, a bit like a cocktail party, waiting. In the end we got as far as lunch time, so we ate all the food that was meant to be for after the trial and decided to draw the raffle. I always provide dog beds for the raffles and they do make people cough up with some money that is well needed for the club’s coffers. Today I donated a waterproof dog bed with a lovely Luxury fleece cover on it. 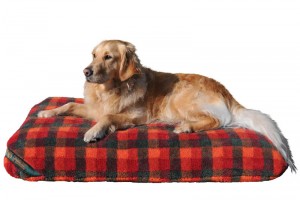